Check Out BABY MACHETE In This Deleted Scene From MACHETE KILLS

With the Jan. 21st Blu-ray release of MACHETE KILLS oh so close it’s time to start dishing out the goodies to get all of you out of your houses and into the stores to buy this bad boy.

So, here is a fun little clip, not used in the theatrical release but found in the Special Features on the upcoming disc:

Love how “over the top” Mel Gibson played this one. Crazy shit going down.

Danny Trejo (Grindhouse, Machete) returns as legendary ex-Federale Machete Cortez in this action- packed thrill ride from innovative director Robert Rodriguez. In his latest mission, Machete is recruited by the U.S. President (Charlie Sheen/Carlos Estevez; Anger Management, Two and a Half Men) to stop a crazed global terrorist (Mel Gibson; Braveheart, Edge of Darkness) from starting a nuclear war. With a bounty on his head, Machete breaks all the rules as he faces death at every turn from an all-star cast of deadly assassins.

The Blu-rayTM Combo Pack includes a Blu-ray, DVD and Digital HD with UltraViolet.

Blu-rayTM unleashes the power of your HDTV and is the best way to watch movies at home, featuring 6X the picture resolution of DVD, exclusive extras and theater-quality surround sound.
DVD offers the flexibility and convenience of playing movies in more places, both at home and away.
DIGITAL HD with Ultraviolet lets fans watch movies anywhere on their favorite devices. Users can instantly stream or download movies to watch on iPad®, iPhone®, AndroidTM, smart TVs, connected Blu-ray players, game consoles, and more.
Bonus Features on Blu-rayTM and DVD 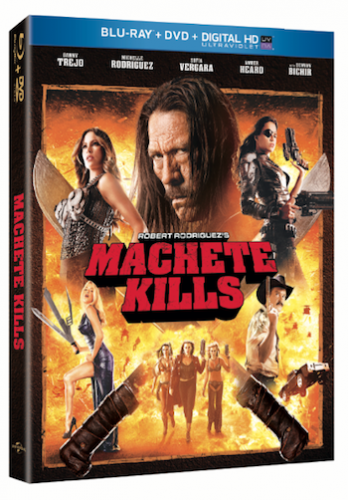