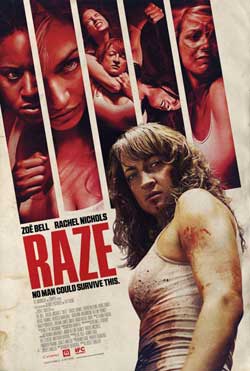 In order to protect their families, a group of abducted women are forced to fight each other to the death using their bare hands.

In an underground chamber a group of kidnapped women are forced to fight each other to the death to protect their loved ones from being murdered. If they win their fights then they (& their loved ones) live to see another day. But if they lose (& die) then their loved ones (Who are kidnapped along with them) die as well. That’s about the entirety of the storyline in Raze, a new action/horror film featuring some alumni from Quentin Tarantino’s “Death Proof” (2007). 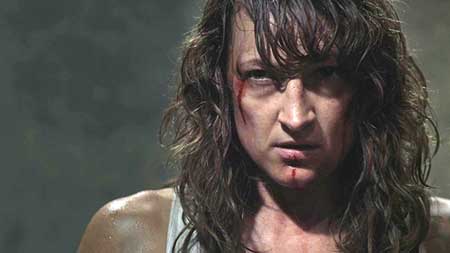 Zoe Bell plays Sabrina, who in the beginning of the film is already in a heated battle for her life. She’s fighting to protect her daughter who is being held somewhere close nearby (Fighters can not only watch fights going on from their cells but they can also watch their loved ones). In an amusing bit, Bell feigns weakness in order to bring her opponent’s guard down…then she brutally kills her. Of course all of this is being watched by a group of wealthy people who are part of a secret society that’s run by the husband & wife team of Joseph (Doug Jones) & Elizabeth (Sherilyn Fenn). But, in a twist, it’s never made quite clear if there are wagers being placed on the outcomes of the fights. The women we do meet are pretty much the standard Women In Prison stereotypes that you’re accustomed to already. There’s the innocent one, the black one, the insane one, the one who cries “I don’t belong here!”, the tough as nails one and the bully. And 10 minutes into the film you already know who the final two are going to be…or do you? 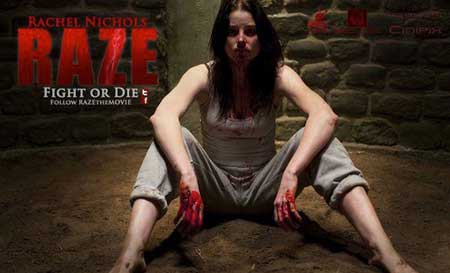 And that’s where the film begins to subvert everything you thought you knew about WIP movies. The script (By Robert Beaucage) seems content to play along with the standard tropes that are associated with WIP flicks but, every so often, it tosses a curveball at the audience and flips the script which takes it into uncharted territory for a film of this ilk all of a sudden. I don’t mean to say that it’s a brilliant screenplay (It ain’t), but it’s different enough to keep your interest and that’s half the battle right there. There’s no nudity or sex in the film either, further subverting what you’ve come to expect from a WIP flick but the exclusion of those more exploitable aspects of the genre don’t lessen the sheer brutality of what’s going on here. 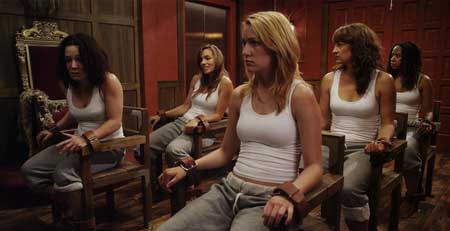 The other half of the battle is the cast and, much to my surprise, the cast kicks both literal & figurative ass! Bell is not only nice to look at but the woman can fight hard! There’s not much in the way of actual acting that she (Or the rest of the cast) have to pull off convincingly but they do have to sell the fight scenes, they have to look realistic & they have to be brutal. Let me just tell you that the fight scenes are brutal & realistic to the extreme! Make no mistake about it, you will feel a lot of the kicks and punches being thrown in this film! The fight choreography (By Kenny Gage) is first rate. The best performance in the film comes from Rebecca Marshall as Phoebe (The bully). She will have you pretty much hating her guts inside of 30 seconds but that’s what a good villain is supposed to do isn’t it? I had a small issue with the way her final showdown with Sabrina played out but that just turned out to be one of those subversions I mentioned earlier (You’ll have to see the movie to know what I’m talking about). Death Proof alumni Tracie Thoms and (In a small cameo) Rosario Dawson also appear in the film alongside a group of attractive (& kick ass!) women.

But that doesn’t mean all is perfect either. The script isn’t particularly visionary and some characters do extremely stupid things in order to keep things moving (Especially in the last 10 minutes or so). And as much as I enjoyed watching the fight scenes I had to wonder how on earth the baddies managed to abduct every female MMA fighter in America because every woman in this film had some mad fighting skills. I’m not talking about pulling hair and trying to scratch each other’s eyes out skills – apparently all of these women watched a lot of Bruce Lee movies and that just felt phony to me. Then again it made for some great fight scenes… 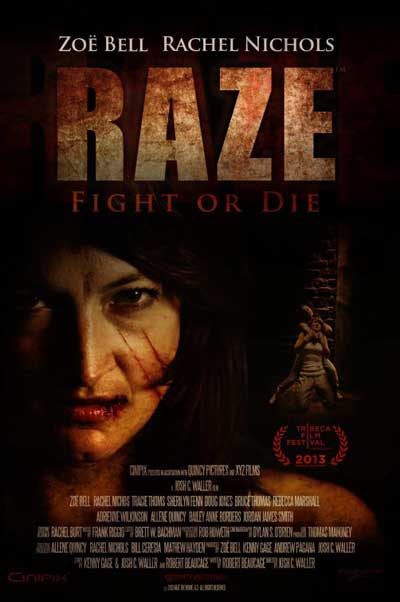 Let’s be clear here, Raze isn’t gonna be recognized by the academy come award season but that’s not what it sets out to do. What it does is beat you over the head with it’s over the top fight scenes which feel more vicious because it’s women doing all of the slugging here. It’s hyper violent, fairly engrossing and extremely watchable bit of exploitation goodness that slips a bit towards the end but I didn’t mind too much as I was thoroughly entertained for the majority of it’s running time. Don’t make a mistake and assume that it pulls it’s punches because it’s a group of women doing all of the fighting though…it doesn’t. It isn’t looking to make you feel good unless you enjoy getting clobbered by attractive women (Admit it…some of you knuckleheads like that sort of thing) and it isn’t interested in tying things up with a nifty little ribbon either…

Raze is just a lean, mean, nasty little movie and I loved it!

Raze – Four out of five shrouds.