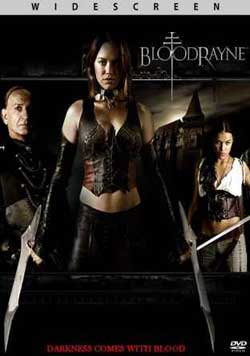 In the Eighteenth Century, Rayne is the half-human half-vampire Dhampir and the lead attraction in a carnival’s freak-show in Romania. When she escapes, she meets a fortuneteller that tells that her mother was raped by the king of the vampires Kagan and she decides to destroy her father. In her journey for revenge, she meets Vladimir and Sebastian, the leaders of the fortress of vampire hunters Brimstone, and she joins their society. She seeks for powerful talismans to defeat Kagan, while the skilled warriors Vladimir and Sebastian train her to face the forces of Kagan and her human side falls in love with Sebastian.

I often try and imagine the creative process of director Uwe Boll. I picture him sitting at home, snacks and drinks on the table in front of him, playing video games, when it hits him: “This game is so good, I wish it could be shortened into a movie!” Unlike you or I, Boll has the means (and the funds and the backing) to make his dreams come true, and so we end up with movies like House of the Dead, and Alone In the Dark, and the Bloodrayne series. Hey, at least he’s playing horror video games, right? It could have been way worse; can you imagine how bad a Super Mario Bros movie would be? What do you mean, they already made that movie? 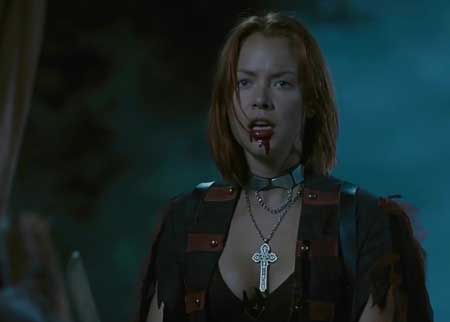 Bloodrayne is an Eighteenth Century vampire movie packed full of action, bloodshed, and stars of yester-year. We follow our protagonist Rayne (Kristanna Loken, known better as Rebecca Lang on tv’s Burn Notice or T-X in Terminator 3: Rise of the Machines), a dhampir (which is apparently a half-human, half-vampire mix,) who goes after Kagan (Ben Kingsley), the king of the vampires and murderer of her mother. Along the way, she meets up with a group of vampire hunters from the Brimstone Society who are on a similar mission. Together, they hope to save an ancient talisman from falling into evil hands and stop Kagan and his army of warriors. What this translates into is a bunch of random encounters and battles with Buffy-style vampires, all sprinkled throughout the ninety-five minute running time 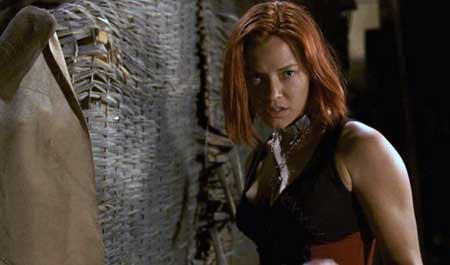 Sometimes a weak plot can be saved by star power. Bloodrayne helps to show us that sometimes it cannot. Our vampire hunters are played by Michael Madsen (a one-time Reservoir Dog who seems statuesque in this one), Matthew Davis (who sports a mullet here, but later took his vampire experience to The Vampire Diaries), and Michelle Rodriguez (of Machete and Lost fame, but here seems to always be sent to do something else while the “men” take on danger). We’ve also got Udo Kier (from every German film ever) as a monk, Streets of Fire’s Michael Pare, and Meat Loaf as Leonid, a sloppy rich guy who lays amongst a cluster of naked women (see also Meat Loaf’s early ‘80’s rock and roll success). You’ll also find a Billy Zane (Demon Knight and Titanic) appearance as well as a bit of Boll-regular Will Sanderson as Domastir, Kagan’s right hand man. 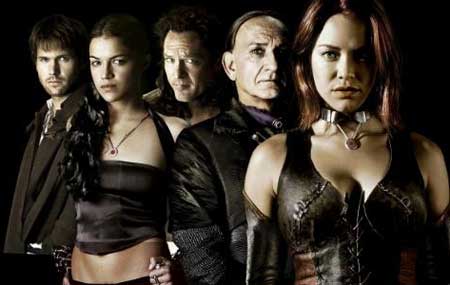 I know I opened with a bit of a jab at the director, but Uwe Boll does a decent enough job with the first of the three Bloodrayne movies, as long as you accept it for what it is. Sure, it is fairly obvious that it is based on a videogame, at least in hindsight. And sure, it is a fairly predictable action movie, complete with the typical expected tropes. But when you go in expecting the worst, it’s easier to be pleasantly surprised. 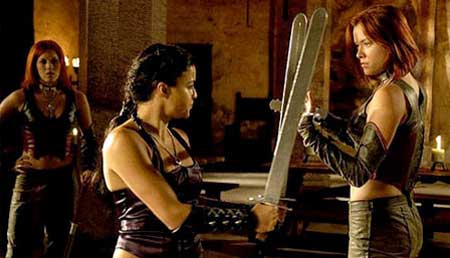 There are a handful of big, action packed fight scenes that are decent, with lots of blood for the horror fans among us. We are presented with a whole bunch of characters right from the start, which gets a bit confusing, but then the ones that stick around ‘til the end aren’t quite developed enough to evoke any emotion from us. But don’t blame the effort of Guinevere Turner, writer of The Notorious Bettie Page and screenwriter of American Psycho. According to Turner, Boll took over her story and re-wrote a bunch, then let some of the actors do the same, so the finished product is only a shell of what she originally wrote. What we get is a plot that is convoluted, at best, and of course the typical misplaced sex for the sake of showing skin which we would expect from a B-grade action film. 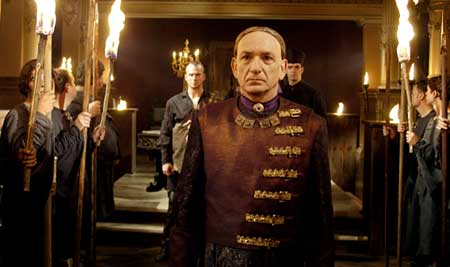 All of that said, time didn’t seem to stand still as I watched Bloodrayne. Despite the actors’ worst efforts and the plot’s twistless turns, this was still an enjoyable enough movie. There are movies that I go into expecting a lot from, and there are movies that if they have even the slightest of redeeming qualities will turn out a success. This falls into the latter category. I couldn’t explain the reasons that things happen along the story because they don’t really make sense. I can’t tell you why, after the story finishes, but before the final credits, we get a replay-montage of a lot of the previous killings. I don’t know why there are two more Bloodrayne movies after this one. But I can tell you that I didn’t mind this film one bit. Just don’t ask me why.