All of you who have been living and breathing this years season of AMERICAN HORROR STORY were excited towards the end of the fall session when news broke that Stevie Nicks was going to be making a special visit to the show. Ms. Nicks music has played a really important part in the goings on this year and although her appearance on the show is only going to be a one off, it’s still gonna rock.

The show runners just released an nice new promo shot of Stevie with the equally as lovely Lily Rabe and I thought you all might want to see it so, here ya go: 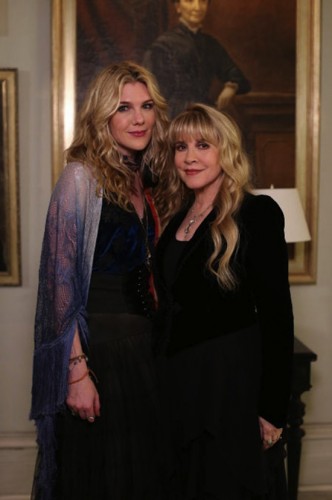 Stevie will be on episode 3:10 which airs next week on Jan 8th. which is titled The Magical Delights Of Stevie Nicks. Here’s what it’s about:

Fiona attempts to out the new Supreme with a visit from Stevie Nicks. Cordelia learns the truth about Hank and the Witch Hunters. Madison tries to eliminate her competition for the Supremacy.