One of the most successful short films of 2016 found audiences from around the world and selected to such film festivals as Fantasia, Fantastic Fest & the Morbido Film Festival to name just a few. Powerful, genre re-inventing and so well crafted with multiple story arcs feeding into the final moments before a pulse is unleashed in London. It takes many to create any sort of film project but in this case takes one to lead them. The man and the mind behind this multi-layered, short form storytelling is Rob Savage. Rob took sometime to continue to talk with Jay Kay of the HorrorNews.net in second of a two part conversation about powerful moments, ADR, sound, makeup, space and the future of the story with Dawn of the Deaf…

Speaking of that segment, that long shot in the tunnel as the deaf couple embraces and the pulse hits is so powerful! Can you talk about that particular shot and how the score especially played such a huge catalyst in it?

RS: That shot was one of the first moments that I came up with when developing the idea. We managed to secure a location in the middle of London, and I roped in all of my Facebook friends to come and be zombies. It took all day to get the shot, as there were so many elements that had to be timed to perfection – its a testament to our amazing team of Assistant Directors that the shot came together so well. Patrick Jonsson composed the film’s score, and did an incredible job. We wanted the music to bleed into the sound design and take us through the scene in a visceral way – the shot is probably two minutes long, and could have easily become boring to watch. Pat’s music develops and grows in such a way that the scene never feels repetitive. 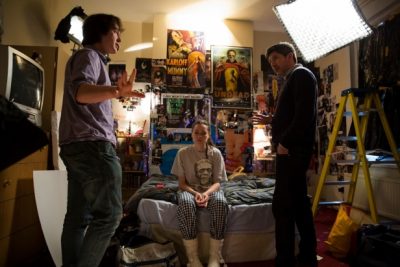 What was the sound design like overall and the challenges that came with it? Talk about recording ADR on such a sound heavy project? What segment does it truly affect the storytelling?

RS: The sound mix of the film took a lot of consideration and is one of the elements I am most proud of — and is entirely down to our fantastic sound designer/mixer Callum Sample. We spent many months experimenting with just how far we wanted to push the sound design, making sure not to over-stylize and risk disrupting the flow of the film. Obviously, we knew that at some point the sound would have to drop out — though never to complete silence — and we’d enter the headspace of one the Deaf characters, a moment we wanted to have huge impact. However, if we relied too heavily on stylizing the sound design, we would risk alienating a Deaf audience and so we decided that the first half of the film was about normalizing the Deaf characters in the eyes of the hearing audience, where we adopted a more conventional approach to the sound design, and that towards the end of the film we would allow the sound to become more stylized, bringing in a lot of bass so that the impact is still felt by Deaf viewers in a cinema environment.

Talk about directing so many extras as part of the various crowds that will be affected by the pulse? Was it more difficult before the pulse or after?

RS: We wanted the film to feel large in its scale and we managed to wrangle almost 500 extras to be our zombie hoard – we even hired an incredible ‘Zombie Trainer’ who put our extras through a day of zombie school, teaching them how to walk, sound and eat like a zombie! This was crucial, as we didn’t have very much time to shoot those scenes and it was key that while I was overseeing the big picture, our Zombie Trainers were focusing in on the individual performances. 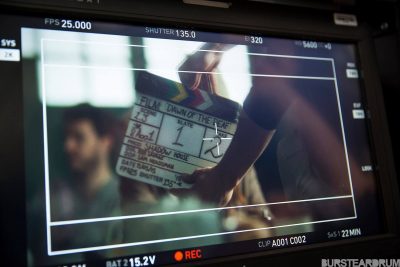 Looking at all the emptiness and the destruction after the pulse, it reminds me of 28 Days Later. Talk about getting the approval for so many locations and having them empty so you can show the results of the pulse?

RS: This was the element of the film that probably took the longest. Since we had no budget to close off the streets, we had to shoot very early in the morning when there was nobody around. We put on yellow high vis jackets, so that we looked like workmen, and nobody bothered us! After we had shot the initial setups, using around 20 extras, our fantastic VFX supervisor Steve Bray added dozens more empty bodies into the shots, as well as animating certain elements to give each shot a sense of character – for instance the pigeons, or the blaring car alarm.

In the final minutes of “Dawn of the Deaf” we see some very effective practical FX and makeup. You hold off until the very end with somewhat of a gut punch. Was that something decided in the initial pre-production to be a part of the short where did that come later on? I know from the film “Lovely Molly”, the intimacy and true horror of the mouth it’s something that connects so deep like teeth and nails. Can you talk about the practical makeup and wanting that to be the focal point of the turning point in the short?

RS: You’re exactly right – we didn’t have the budget to pull off a full disembowelling, and so instead we wanted to make sure that the violence was squeamish and made a huge impact. There are certain points of the body that always make me cringe in horror movies – teeth, nails, ankles, wrists – and so we decided that the lip would be a great way of making the audience recoil without having to spend thousands of pounds on large scale FX. In fact, our budget was so low that we only had ONE shot at getting the lip right. There was no backup. Fortunately, we had a great FX genius, Robbie Drake, working on the film and the effect came together perfectly. 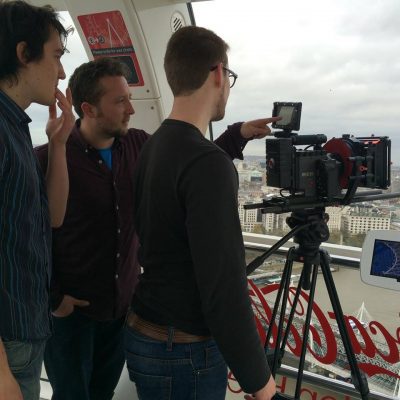 In the final act of “Dawn of the Deaf”, we see each story arc reach its apex. We also see the physical distance of each lead shrink after these surreal moments. Can you talk about range of proximity when it comes to each story and why you decided the order you did?

RS: I designed the film to feel like a reverse bottle-neck – we start very close and personal, and then the film opens out into a much grander narrative. Me and the cinematographer Sam Heasman tried to reflect this in the visuals, by starting out on very tight lenses and keeping very close to the characters, and then using wider lenses and shots in the closing moments of the film. The Deaf community make up around 5% of the population, and so we wanted to give a sense that they were surrounded, dwarfed by the rabid 95%.

Out your eight films projects overall, seven being shorts films, what as a filmmaker do you feel you gain from the short film format? Could have you made “Dawn of the Deaf” as compelling and powerful earlier in your filmmaking career?

RS: Shorts are great ways of building a sense of yourself as a filmmaker: what do I like, what don’t I like? What works, what sucks? They also help build confidence, both in yourself and your ideas, and also in the team around you. Over the past five years I’ve built up an incredible team of collaborators and knowing how talented they are has helped me have the confidence to push my ideas further and further. I would never have attempted the one-shot tunnel scene a few years ago, or tried to work with crowds of extras on no money, but have become more ambitious and inspired as I’ve worked with so many great collaborators.

What is next for Dawn of the Deaf? Will we see more from this fresh take of horror storytelling? Where can we find out more? What’s next for you?

RS: We’re developing a feature length version of Dawn of the Deaf, which I hope will be moving forward very soon. I’m also developing my second feature film Seaholme with Creative England and the BFI – it’s a monster movie about a bunch of outcast kids who find a strange, possibly alien creature washed up on the shore of their small island community. It’s essentially a f**ked-up reinvention of the classic Amblin movies that I used to love as a kid (and still do!)

check out the trailer for Dawn of the Deaf www.youtube.com/watch?v=lgZqq2noLUg&feature=youtu.be & more at the IMDB www.imdb.com/title/tt5644824/releaseinfo?ref_=tt_dt_dt