Home | Articles | Exclusive Articles | The History of Scifi in Horror

Growing up in the 80’s for the most part, I found myself a Horror fan as much as the next kid. My best friend Wally and I joined a local movie-rental club; we would ride our bikes down to the movie place and rent every horror film the guy had. Being 13-14 it was great because he would let us rent the -R- movies with the gratuitous nudity in them.

Looking back, I am still not sure if we rented them for the gore or the girls. But I think it was for the girls with the “cover” of the gore to fool our parents! Let’s not confuse gore with Al Gore who to me is honestly as scary.

Like most of the SciFi Horror fans, I stumbled across their complexity merely by accident. Attracted towards the cheesy ‘Firday The 13th’ (1980’s) films with almost zero plot and all gore, except for the fore mentioned gratuitous nudity. It wasn’t until our “Rental God” suggested ‘Alien 1979’ to us that we really thought we found something.

It represented horror but in a whole different back ground with spaceships, people being blown out into the vastness of space and one crazy looking puppet that came screaming out of a guys belly!

Now up until that time, I was never so scared until I saw that scene. Sure the cool hack ‘em up gore stuff was plenty scary, but this stuff made it hard for me to walk home at night! Crazy, I thought an ‘Alien’ was going to jump down from a tree and eat me, obviously far more less likely than a homicidal maniac jumping from behind the tree with a chain saw right??

SciFi horror stimulates our intellectual thought patterns, we know the technological back-drop does not exist, but it could in the future. It applies to our natural instinct to build something better, something fantastic. The sense of the horror behind that somehow makes it more developmentally credible.
Mary Shelley’s literary master piece ‘Frankenstein 1818’ is probably the oldest most widely known Scifi Horror that exists. It was way ahead of its time even for today, but somehow the crude science behind bringing Frankenstein’s monster to life is so credible. Even today we know it is impossible to re-animate dead flesh no matter how much ‘Re-Animator 1985’ tries to convince us! ‘Re-Animator’ believe it or not was a very loose, VERY LOOSE adaptation of HP Lovecraft’s story “Herbert West: Re-Animator” which is a good read if you like Lovecraft but who doesn’t? 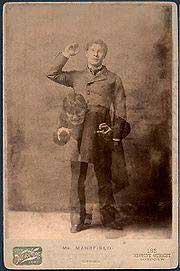 Robert Louis Stevenson who wrote ‘Treasure Island’ also wrote a SciFi classic novella ‘Strange Case of Dr Jekyll and Mr Hyde’ published in 1886. This has been done and re-done as well as the main character(s) have been seen through-out cinema and literature. This is one classic that even today we use its abridged title in everyday life “He/she went all Jekyll and Hyde on me” or any variant of the phrase. I am sure we all know someone with this case of occasional psychosis.

The 1930’s saw the breakthrough of various forms of technological in filmography, make-up and special effects. Making the 1931 film ‘Frankenstein’ by James Whale come to life. Even seeing this film in the 80’s would give you nightmares. Progression moved a bit slower after that led to other releases but no significant breakthroughs until ‘The Day the Earth Stood Still 1951’ not the remake done with Keanu Reeves which I thought was entertaining, but nothing compared to the 1951 classic which must have been immensely impressive on the early silver screen. With the towering robot standing, shooting out its light ray laser. Not impressive by today’s standards, but still a good SciFi classic that will bring a grin to your face.

Almost standing light years ahead of its time was the 1953 Radio remake ‘War of the Worlds’ done in film. I have heard the radio cast which was originally done on October 30, 1938, so scary was the original SciFi horror on the radio, it had people calling their local police frantic of an actual alien invasion! Can you imagine! This HG Wells adaptation of his novel is a quick show how horror and SciFi are a match made in literature and cinema heaven. 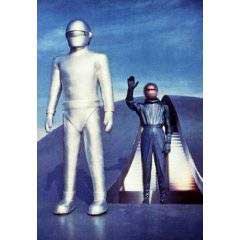 Cinema moved quickly with literary hits, ‘Invasion of the Body Snatchers 1956’ with 3 following remakes, 1978 and a closely related ‘Pupper Masters 2002’ and ‘Invasion 2007’all based on the novel by Jack Finney in 1955. ‘The Thing 1951, 1982’ based on a short story by John W. Campbell published in Astounding Science Fiction Magazine, August 1938 issue (good luck finding it, I have been looking for years!) the 1982 film version is a personal favorite of mine and may actually be my favorite SciFi Horror next to ‘Aliens’.

Two movies that seem to always be on the top of most of the top lists for cinema SciFi Horror are ‘The Fly 1986’ and of course ‘Alien’ though I prefer ‘Aliens’ for the darker dreary feel. ‘The Fly’ also a remake from the 1958 with the immortal Vincent Price, this which has a more interesting twist to it… 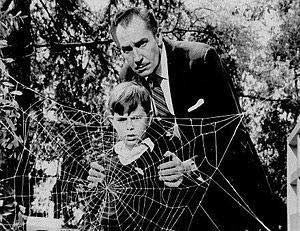 “Help me!” With the release of ‘Avatar’ with its life like digital 3D it is to be seen what other literary SciFi Horror will see its remake or new release with spectacular computer generated SciFi effects that will make the space creatures jump right into our lap as with all our intellect and reasoning we will have no doubt that could actually happen.