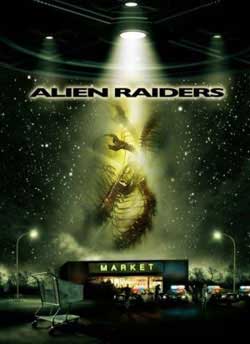 With guns blazing, furious assailants besiege a small-town supermarket, killing several employees and shoppers and taking others hostage. But the real horror begins when the survivors realize that something even more sinister lurks in the aisles. As police barricade the perimeter, an anxious standoff reveals the shocking truth. Carlos Bernard, Mathew St. Patrick and Rockmond Dunbar star in this sci-fi horror film directed by Ben Rock.

A much anticipated talked about film to come from under the wire is our new release of “Alien Raiders” from the mind of Ben Rock and writers David Simkins and Julia Fair . Ben Rock who I’ve never heard of up till this film comes to the table with a natural talent from directing. His previous films include mostly TV episodes and a handful of films that seems to have gotten lost in the mix of releases. Though none the less “Alien Raiders is a stand up production.

Our story which is completely based around a supermarket much like a few films I’ve seen the past ( Intruders, The Mist ) is full of bait and switch type plot lead ins. As a small town local mart prepares for closing they are immediately taken over by a gun toting team of vigilantes who give no reason or negotiation as to what they want and why they are there. Instantly guns are firing, bodies fall and with the exception of a weird face holding individual they call “spooky” not much adds up. The team who are lead under the direction of Aaron Ritter (Carlos Bernard) are all former employee of the JPL. (Jet Propulsion laboratory). Those who past the “spooky” test test get to live, while those who don’t get a bullet to the head. With this kind of attack especially on a small town supermarket you know there’s a purpose waiting to be revealed here. Hence the movie title, that part’s not too hard to figure out. A few more shots are exchanged, bodies fall and the teams main “spotter” (as he is called) gets shot in a crossfire.

Determined to get what they came for, the team takes all the occupants into hostage for a round up of testing. Now most of the film goes by without talks of aliens, infections, hosts or creatures that pop out of chests. Though this is a smart play by the director to build the tension and not give us the main course all in one sitting. We are given background information as the drama plays out and the time grows shorter to locate the main alien the call the “King” who is a part of aliens know as the “Sentinels”. The king is key to reproduction with alien female hosts. In case you didnt get that bit in viewing, now your equipped with the terminology.

The JPL seemed to have uncovered or been the source to these original beings. Not alot is known past that bit of info. Though “spotters” as they are called hold the ability to determine other aliens per holding their head and doing a mind-melding kind of thing. “Spotters” originated from hosts that were infected but didn’t take.

With a hostage situation at hand, of course local police want to charge in and finish the situation. Though Kane (Rockmond Dunbar), the main negotiator is more inclined to hear them out to prevent any more fatalities. The team with no spotter on hand has to resort to more cruder testings by making the hostages drink milk and then have there pinky cut off to determine the results. The reason for this is revealed later. The film moves with a sense of great pacing and dynamics which I give credit to the directing talent on board. Everything else receive high points for a professional production.

The scares are very limited but left to impact moments rather than full out attack modes as seen in “AVP” The lighting is balanced to fit the mood providing only glimpses of these alien creatures leaving much of there general makeup to the imagination. Attacks are quick, vicious and calculated, all the workings of a great sci-fi meets horror kind of film. The writing is solid and covers all the holes, except for the ones they intended not to be covered. Can this film spawn a sequel? Well once you get to the film ending, you be the judge. Very slick, action-filled with great sacrifice overtones………….. I highly recommend you check this winner out. 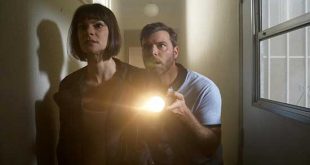