There’s a headline I never thought I’d write. You knew the success of SHARKNDO was going to lead to this, and it has. Allow me to introduce you to VOLCANO ZOMBIES. Yeah, it’s exactly what you think it is. Here’s what the press release reveals:

Danny Trejo (MACHETE, MACHETE KILLS) is co-starring in VOLCANO ZOMBIES, a new feature directed by Rene Perez (THE DEAD AND THE DAMNED) and written and produced by Jeff Miller and Jason Ancona (co-writers and producers of AXE GIANT: THE WRATH OF PAUL BUNYAN). The first artwork and stills have been released.
VOLCANO ZOMBIES is about a sheriff and an estranged family who must escape not only the impending eruption of what was thought to be a dormant volcano but also a horde of zombies brought to life by the cursed mountain.
Other cast includes Tom Downey (AXE GIANT, THE BEAST OF BRAY ROAD), Moniqua Plante (“Femme Fatales”), Robert F. Lyons (DARK NIGHT OF THE SCARECROW, 10 TO MIDNIGHT), Nicole Cummins (LOGAN), Kevin Norman (“Melissa & Joey”), Kyle T. Heffner (“Bizarro George” from “Seinfeld”), Julia Lehman (CHEERLEADER MASSACRE 2), Tom Nagel (HILLSIDE CANNIBALS), Jenny Lin (PIRANHACONDA), and Morgan Lester (JOHN CARTER).
Trejo plays a Native American warrior who knows perhaps too much about the cursed mountain range.
Post-production is underway. VOLCANO ZOMBIES has filmed in several locations, including around active volcanoes in Lassen Volcanic National Park.
Miller and Ancona are producing, along with casting director and co-producer Mark Sikes.

What’s up with Danny Trejo, that dude never ages. Kind of creeps me out, not gonna lie.

Here’s some artwork and stills for your viewing enjoyment. 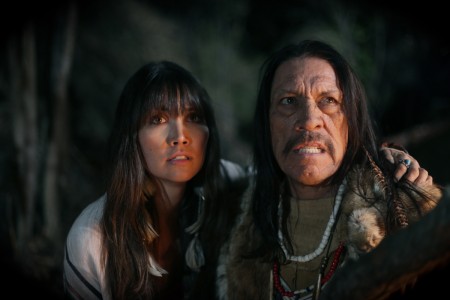 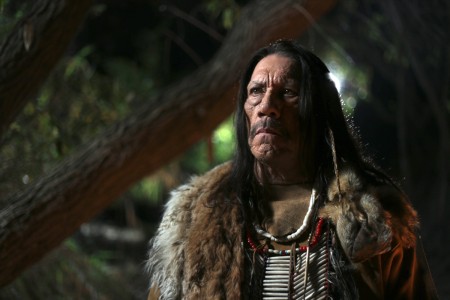