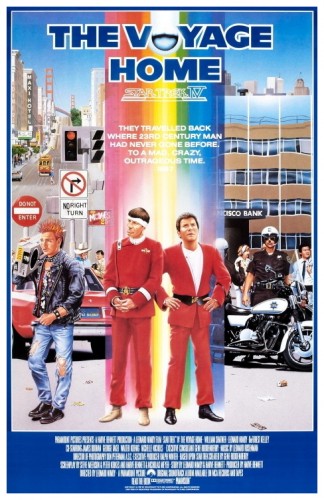 SYNOPSIS:
“James Kirk who after rescuing Spock and bringing him to Vulcan where he is fully restored, is now the most hated man in the universe, because he disobeyed his superiors and killed a Klingon crew and took their ship. After three months on Vulcan, Kirk decides to return to Earth to face the consequences of his actions along with his crew who aided him. Also accompanying them is Spock, who is still trying to understand his human side. What they don’t know is that an alien probe approaches Earth and is emitting a signal that nullifies all power systems. And it is now vaporising the planet’s oceans covering the planet in a cloud that covers the earth cutting them off from the sun – the planet’s main source of energy. The President of the Federation sends a transmission telling everyone about what is happening and to stay away from earth. Kirk upon hearing it, checks out the probe’s transmission and Spock postulates that the alien is not hostile merely unaware that it’s transmissions are disruptive. Spock thinks it’s trying to communicate with another species other than man. And upon analysing it Spock learns that the probe is sending the songs of whales, specifically Humpback whales. Only problem is that the species has been extinct for centuries. With little choice, Kirk decides to get some humpback whales from the only place they can from Earth in the past so that they can communicate with the probe. So they travel through time and arrive in the late 20th century. And they discover a pair of humpback whales in San Francisco. So Kirk and Spock set out to find them. While Scotty, McCoy and Sulu try to find the materials they need to make a whale tank. And also the ship’s dilithium crystals are failing. So Uhura and Chekov try to find a nuclear reactor so that they can drain some radiation which they hope can restore the ship’s power. And they have to contend with the ways of the 20th century.” (courtesy IMDB)

REVIEW:
Before Star Trek III The Search For Spock (1984) was released, its director Leonard Nimoy was asked to return to direct the next film in the franchise. Whereas Nimoy had been under certain restraints making the previous picture, Paramount Pictures gave the director greater freedom for the sequel. In contrast to the melodramatic operatic events of previous Star Trek movies, Nimoy and producer Harve Bennett wanted a lighter movie without a villain. Paramount was dissatisfied with the resulting script, so they asked Nicholas Meyer – writer-director of Star Trek II The Wrath Of Khan (1982) to rewrite it. Meyer refused to read the first draft script, pointless since it had absolutely no appeal to the studio. Bennett wrote the beginning and end, while Meyer wrote the middle part which takes place on Earth during the 20th century. Meyer gave the script humour, social comment, and a gadfly attitude. There’s no dying, no fighting, no shooting, no photon torpedoes, no phaser blasts, no stereotypical bad guy. 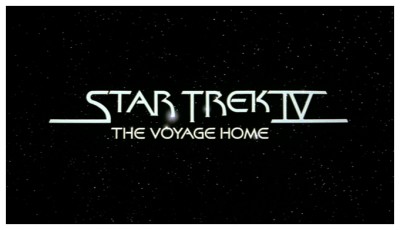 Indeed, Star Trek IV The Voyage Home (1986) is the most lighthearted film of the entire Star Trek movie franchise, which began with Star Trek The Motion Picture (1979). The Voyage Home sends 23rd-century Admiral Kirk (William Shatner) and his crew to San Francisco in 1986. This narrative device both allows the film to discuss a relevant 20th century issue (species extinction) and provides a setting in which Kirk and his comrades can be humorously out-of-touch. The crux of the film’s plot proceeds from the necessity for Kirk and his crew to locate two humpback whales, whose song is the only thing that will keep an alien probe from destroying 23rd-century Earth. The trouble is, humpback whales have long since been hunted to extinction, and our heroes must literally travel back in time to find, catch and transport two live whales back to their own era.

Successfully sling-shotting their ship around the sun, the crew do indeed find themselves in a time and place where the humpback whale still exists – late 20th-century San Francisco. After parking their cloaked ship in Golden Gate Park, the crew divides up into three teams: Kirk and Spock (Leonard Nimoy) venture off to find the whales; Scotty (James Doohan), McCoy (DeForest Kelley) and Sulu (George Takei) work to arrange the safe transportation of the whales; and Chekov (Walter Koenig) and Uhura (Nichelle Nichols) embark upon a quest to find the necessary resources to repair their ship which was damaged as a result of the time travel. Much of the humour of the film results from the difficulties faced in meeting these objectives: Chekov scares terrorist-wary citizens by asking where to find a nuclear ‘wessel’; Scotty futilely shouts commands at a desktop computer; Spock tries to fit in by peppering his already formal speech (“To hunt a species to extinction is not logical”) with clumsy profanity.

Most of the film’s serious moments, however, are appropriately related to Kirk and Spock’s attempt to obtain whales for safe transport back to the future. They discover two whales at the Cetacean Institute that are about to be released back into the open sea, where they will become targets for prowling whaling ships. Fun, funny and socially conscious, The Voyage Home was certainly a change of pace for the franchise, embraced by many fans and newcomers alike, and Oscar-nominated for Best Cinematography, Best Visual Effects, Best Sound Effects, Best Editing, and Best Original Score. But, despite all this high praise from film-goers and critics, it definitely feels like there’s something missing here. Maybe it’s because the movie is only half Star Trek. I have great respect for Nicholas Meyer as a writer, who demonstrated his brilliance in Time After Time (1979), using time travel to make wry observations about contemporary culture. However, Meyer himself has admitted that he included some material in The Voyage Home simply because he couldn’t fit it into his own film. Thus we are given many scenes which, though effective as entertainment, make little sense in the Star Trek context.

Consider for example Spock’s neck-pinch to that mohawked punk rocker on the bus. Meyer, who dismisses punk music as noise pollution, achieved vicarious wish-fulfilment through Spock in this scene. But why do the people on the bus react by smiling and applauding? They really have no idea what Spock has just done – how do they know they aren’t witnesses to a murder? After this incident, Kirk proceeds to denigrate the novels of Jacqueline Sussan and Harold Robbins. This is a wonderful put-down, but Kirk is simply not the person to have said it. I don’t care how well-read Kirk is, I refuse to believe that the work of those ‘creative typists’ (as Harlan Ellison calls them) will endure into the 23rd century. Logically, Kirk should have no knowledge of these authors. Furthermore, if those glitzy potboilers are all that will be remembered three hundred years from now, then all you present-day writers attempting to create decent serious literature may as well give up right now.

One of the film’s most glaring errors is its depiction of Kirk and Spock’s naiveté about money. This is totally absurd. Numerous episodes have referred to the use of credits as payment and, in the previous film just two years before, Doctor McCoy was heard to say, “Price you name, money I’ve got!” So why does Kirk flat-out lie, telling Gillian Taylor (Catherine Hicks) that nobody uses money in the 23rd century? And why is Spock, who is mentally keen enough to program their trajectory from memory, unable to figure out what ‘exact change’ means? In many ways the middle section of the film seems just plain careless. There are inconsistencies with the transporter: sometimes crew members request to be beamed up while at other times they dematerialise spontaneously, depending on the whims of the script. Also, there seems to be a cavalier attitude about altering history. Back in the days of the original television series, causing even a slight change in the timeline was a serious transgression, but The Voyage Home displays a nonchalance as if to say, “What does it matter, as long as we tell a good story?” Believability, that’s why it matters.

Only a portion of the movie is set in the Star Trek universe. When I fork out good money to watch a Star Trek film, I expect to explore strange new worlds, not to see cars cruising smog-filled Californian streets. Yet I have no problem accepting a similar time-travel story in the original series episode Tomorrow Is Yesterday, probably because it contains all the familiar trappings, much of the action is set aboard the Enterprise and, most importantly, it remained faithful to the original concept of Star Trek. I attend a Star Trek film with certain expectations. I want to see a bright and promising future, not our ignoble present. The most tantalising scenes in The Voyage Home are those that take place at Federation headquarters. Starfleet, which in Search For Spock was peopled by bureaucrats and buffoons, has suddenly become respectable again. For the first time, we are shown the highest echelons of Federation government. The president, whose name we are never told, seems an immensely wise and fair individual with a Merlinesque quality about him. Who is this person? How did he get to be president? We’ll never know. 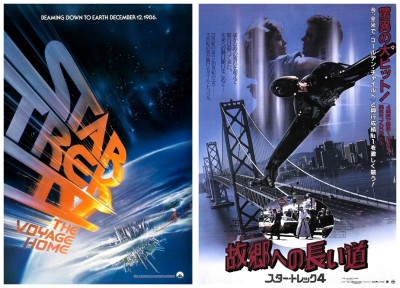 There’s one other scene that bothers me that just doesn’t feel right. After the whales are freed, everyone – including Spock – is laughing and horseplaying, tossing each other into the water. No longer do they look like our characters – they look like actors celebrating the wrap-up of shooting at a cast party. It’s almost as if the DVD has skipped from the movie to the blooper reel. Search For Spock was widely held to embody the essence of Star Trek but, as a major Hollywood movie, it is severely flawed. The Voyage Home achieved critical and box-office success, but only by dispensing with time-honoured Star Trek traditions. Will we ever get a film that is both good cinema and good Star Trek? Is it possible that the two are mutually exclusive? It’s with these questions in mind I’ll quickly ask you to please join me again next week when I shall discuss another dubious classic for Horror News. Until then, good night and remember, as my old friend Bela Lugosi would say, “Bevare! Bevare of the big green dragon that sits on your doorstep – and the gifts it leaves on your lawn.” Toodles!