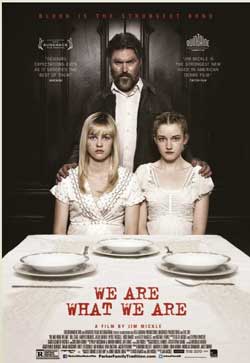 The Parkers, a reclusive family who follow ancient customs, find their secret existence threatened as a torrential downpour moves into their area, forcing daughters Iris and Rose to assume responsibilities beyond those of a typical family

Jim Mickle impresses more with each cinematic endeavor.  His first feature as a writer/director, “Mulberry Street,” made its debut in the 2007 After Dark Horrorfest lineup.  A tense and character-driven take on the standard zombie plague template, it was the very best of the series that particular year.  His 2010 release “Stake Land” remains one of the stronger vampire efforts of the past five years, and further cemented him as a filmmaker on the rise.  This progression continues ambitiously with his latest, “We Are What We Are.” 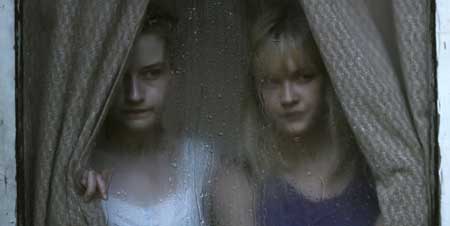 Based upon a 2010 Mexican production of the same name that I confess I haven’t seen, “What We Are” (I refuse to shorten the title to “W.A.W.W.A.” because it sounds ridiculous) strikes a somber chord straight out of the gate with its depiction of a rural New York village in the midst of a thunderstorm that threatens to flood the town.  The depressing weather will provide so much more than mere soggy atmosphere, itself playing a pivotal role in the central family unit’s dissolution.  Their downfall begins with the sudden death of matriarch Emma Parker (Kassi DePaiva), who suffers a stroke whilst buying supplies after an awkward exchange with a cashier establishes her as a harmless nut in the eyes of the locals.  We are fully introduced to father Frank (Bill Sage, “Precious,” “Boardwalk Empire”), teen daughters Iris and Rose (Ambyr Childers, Julia Garner) and young son Rory (Jack Gore) as they are informed of the tragedy.  Not exactly a whimsical fashion in which to start a picture, but it immediately elicits sympathy for the Parkers, an emotion just as paramount to the film’s success as the constant rain that dampens every frame. 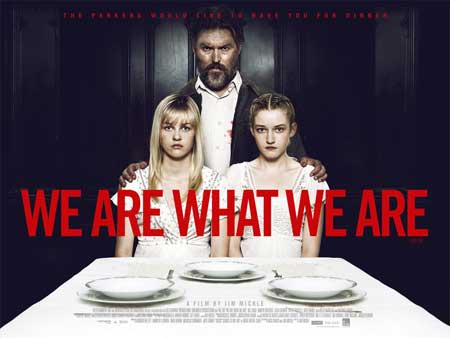 Frank, so shattered by his wife’s passing he can’t bring himself to identify her body, sends Iris and Rose in his place.  This will be the first of many steps into adulthood Iris is forced to endeavor, as she is informed it’s now her duty to prepare the annual Lamb’s Day Feast for the family, an ancient tradition whose roots are shown in cogent yet unnecessary flashbacks.  What the hell is Lamb’s Day, you may ask?  “What We Are” unfolds this barely-veiled mystery through the Parker daughters’ eyes, allowing the family’s crumbling dynamic to guide the first half.  Mickle wisely affords his actors wide berth to explore the characters, peeling away their own layers until the ugly core is revealed.  Sage, a dependable supporting performer, is outstanding in his portrayal, bringing a religious fervor to the role of Frank that shies from approaching histrionics.  He rules like a dictator, but the veteran actor never loses sight of the man’s angst over his deceased love.  The film belongs to Iris and Rose, however, and Childers and Garner are nothing short of incredible in their depictions of the girls.  Both wish to buck the family’s rituals and live like normal people, though neither has an initial clue how to accomplish that goal.  I was reminded of antagonist Ada’s plight to break from her backwoods cult community in the recent “Jug Face,” another impeccably presented mood piece. 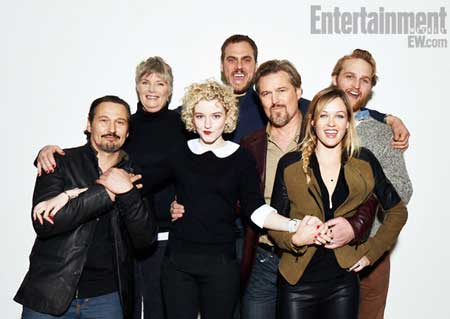 As the deluge continues to swell the murky river running through the surrounding forest, clues are unearthed both literally and figuratively.  Local practitioner Doc Barrow (the brilliant Michael Parks of “Red State”) finds a human bone washed upon the bank while walking his dog.  This leads him to further investigate Emma’s death, discovering that her passing may have been the result of a rare form of encephalopathy known as Kuru.  Look it up if you’re a fan of spoilers.  His daughter had disappeared years prior in an unsolved case, and the physician’s amateur detective routine propels much of the latter half into the finale.  At the unhappy homestead, Rory becomes obsessed with the “monster” living behind a locked door in the basement, which bears an auditory resemblance to a crying, terrified female.  Frank begins showing the same symptoms his wife displayed earlier, and his sanity quickly fades as the disease ravages his body.

Once Barrow takes matters into his own hands after his accusations fall upon the deaf ears of Sheriff Meeks (co-writer and star of Mickle’s two previous efforts Nick Damici) is where “What We Are” loses its footing a bit.  Realizing exposure is imminent, Frank poisons the celebratory meal to protect his brood from the persecution they had spent generations evading.  This harrowing moment, driven by the girls’ knowledge of his intentions, is interrupted when the doctor enters waving a gun, tearful and demanding answers.

This leads to a violent confrontation that needlessly relies on the “he’s down, but not out” shock scare and brings the entire enterprise back to center, the family again at the table and the question of what will happen still unaddressed.  The tension is diminished somewhat, the scene feeling like a repeat of what we’d just witnessed five minutes prior.  How it resolves the second time around more than atones for the thematic hiccup, serving up (that pun is hilarious when you watch it) a shocking and mind-blowing conclusion that should satisfy both film snobs and gore hounds alike.  These words are not often uttered by yours truly, but I did not see that coming. 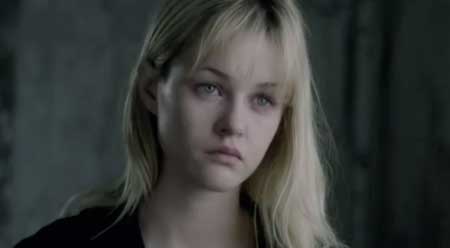 Mickle continues to mature as an artist, creating a somber blanket of dread that damn near suffocates.  Charles Dickens himself would walk away from this tweeting “Jesus, what a dreary piece.”  (Yes, since in this hypothetical Mr. Dickens is alive to watch a motion picture, he also has a Twitter account.  Make something of it.)  There’s no denying the power of “We Are What We Are,” nor the strength of its central performances.  Whether or not you’ll actually enjoy the experience, friends, depends primarily on your ability to stomach crushing melancholy.  Despite the slow start and deliberate pacing, I was enthralled from start to finish, and look forward to hunting down Jorge Michel Grau’s original film.  As soon as they take me off suicide watch.  Just kidding.