There is an interesting article by Alison Nastasi over at Flavorwire.com about fifteen obscure horror film titles.  I always love reading these lists that other writers come up with because invariably there are some titles on them that I have not only not seen yet but have never even heard of before.  This list is no exception, and it’s unfortunate that a film like Let’s Scare Jessica to Death (1971), released by Paramount Pictures, has fallen into obscurity despite being available on DVD.

The titles on Ms. Nastasi’s list that I need to catch up with include:

The Call of Cthulhu, Andrew Leman’s 2005 film that somehow snuck by me

At Midnight I’ll Take Your Soul, a 1963 Brazilian effort that features John Saxon

Don’t Deliver Us from Evil, a 1971 French outing that finds a pair of salacious teenage girls out to serve Satan

Tony, Gerard Johnson’s 2009 film about a serial killer in a suburban London town

I got to thinking of my own list of obscure films.  They would include these ten right off the bat (I have included one television outing that makes it eleven):

1- The House That Screamed (1969)
the 1969 Narciso Ibáñez Serrador film that most closely influenced Dario Argento’s Suspiria (1977) and desperately needs a Blu-ray release.  Available on DVD-R through various outlets.  Also known as La Residencia and The Finishing School.  Would love to see this one on Blu-ray, completely restored.

2- The House in the Fog (1972)
a stylish and creepy 1972 Spanish film about a group of strangers who all end up, you guessed it, at a house in the fog!  This film also desperately needs a Blu-ray release.  Available on DVD-R through various outlets.  Also known as Murder Mansion and Maniac Mansion.  Would love to see this one on Blu-ray, completely restored.

3- The Other (1972)
Robert Mulligan’s 1972 film adaptation of Thomas Tryon’s novel of the same name contains a brilliant and heartbreaking central performance by the late Chris Udvarnoky as a boy whose twin brother makes his life a living hell.  Now available on Blu-ray (with an isolated score by Jerry Goldsmith!) from Twilight Time at Screen Archives Entertainment. 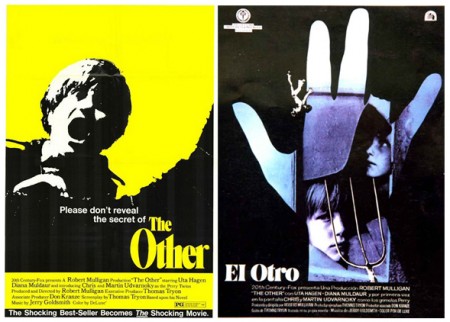 4- Alice, Sweet Alice (1976)
Alfred Sole’s 1976-lensed thriller and one of the most under-rated and best made slasher films of all-time.  Rumor has it that the original camera negative is being scanned by the Warner Archive for future release.  Originally titled Communion and later reissued in 1981 as Holy Terror.  Contains a brilliant and memorable score by Stephen Lawrence.  Highly under-rated; needs a Blu-ray pronto. 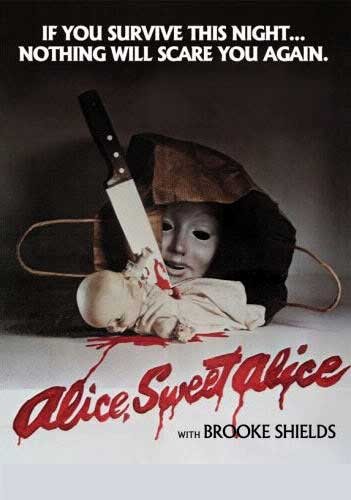 5- Tourist Trap (1979)
is the most frightening movie ever made about mannequins.  Director David Schmoeller took his thesis project, The Spider Will Kill You, and turned it into this bizarre concoction about a lonely museum owner who tries to help a group of young people after they encounter car trouble.  Although available on Blu-ray, it is cut by five minutes.  Excellent soundtrack, though incomplete, is on CD.

6- Possession (1981)
A 1981 film that is unlike any that you will ever see, directed by the brilliant Polish director Andrzej Żuławski (ahn-jay zhoo-WAV-ski). Dario Argento clearly saw this one right before shooting Tenebre (1982).  Available in a deluxe Blu-ray from www.mondo-vision.com. 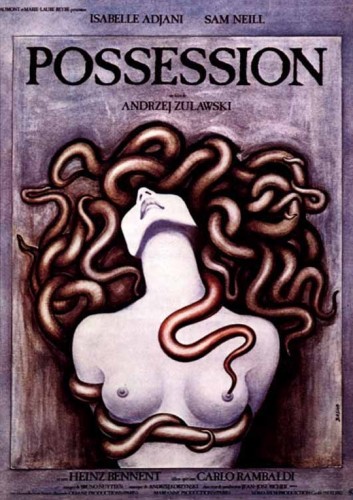 7- Ghostkeeper (1980)
A moody Canadian creepfest shot in December 1980 in Alberta, Canada.  It is by no means a great horror film, and some viewers have labeled it downright boring, but it boasts snow-blanketed Canada and a winning, unreleased score by composer Paul Zaza.  This one is slow, but moody.  Available in a hard-to-find DVD from Code Red. 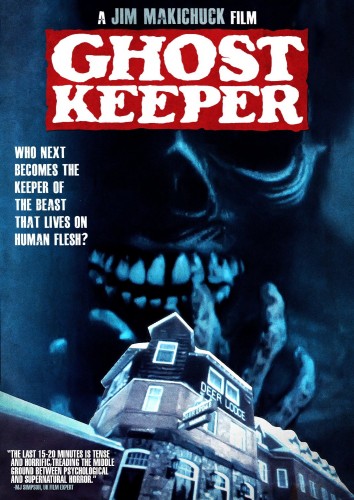 8- Curtains (1983)
One of my favorites from 1980, or 1981, or 1982, or 1983, depending on when it was filmed or finally released, is also the bearer of my nom de plume. This Canadian film that takes place in the snow boasts a terrific cast, some of the most quotable dialogue of any horror film, moody cinematography, and an excellent and creepy score by composer Paul Zaza (Kritzerland, are you listening?).  Finally available on Blu-ray, from Synapse Films. 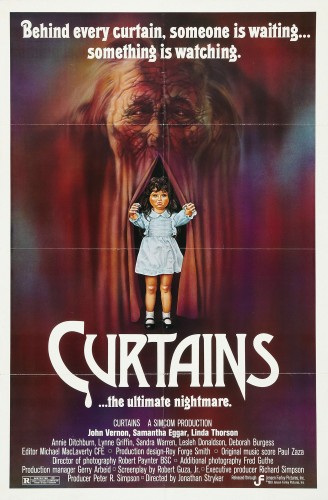 9- One Dark Night (1982)
is an initiation film that was shot in late 1981 and released about a year and-a-half later.  It stars retired actress Meg Tilly as Julie, the Nice Girl who wants to be part of a group and needs to prove that she can take what the Sisters dish out when she agrees to spend a night in a mausoleum.  E.G. Daily is the initially on-board Sister whose eventual reluctance causes her to fall out of favor with the ringleader played by Robin Evans.  Another minor classic that needs a serious Blu-ray upgrade.  Great little score by Bob Summers that needs a soundtrack release!  Would love to see this one on Blu-ray, completely restored (available in a hard-to-find 2-disc DVD). 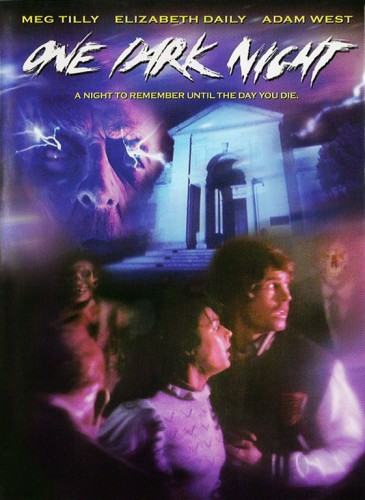 10 – Scene of the Crime (1984)
Okay, this isn’t a horror film but rather a very short-lived vignette-inspired television series hosted by Orson Welles.  One episode in particular that I saw left a deep impression on me.  It was called The Babysitter and it featured Angela Lansbury, Anne Lockhart, Robert Pierce, Priscilla Weems, and Isabelle Walker.  I haven’t seen it since 1984 or 1985 (it aired before my family even owned a VCR), so this is my recollection of it: it begins when a young girl named Karen (Isabelle Walker) gets a music box from her parents (Anne Lockhart and Robert Pierce) for her birthday.  On top of the music box is a figurine of a magician. This box will grant her one wish.  Karen has a babysitter (Priscilla Weems) who comes to her house just before her parents go out.  When the parents leave, the babysitter taunts Karen, turns the lights out to scare her, and shouts her name through the vents.  Karen runs to her room and holds the music box, making a wish that the babysitter will go away. The babysitter looks through the house to find Karen, knowing that she is hiding from her. The babysitter opens the closet and…well, I don’t want to spoil it, but it’s a great ending…MCA Home Video released a 90-minute compilation of this series on VHS in 1986, but this particular episode was not on it.  ????!!!!!   Somebody out there has to have this episode on VHS! 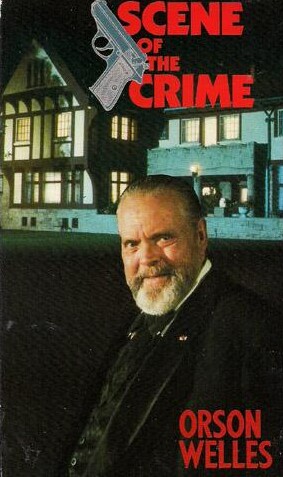 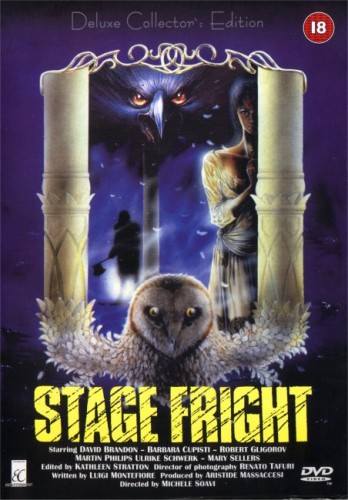