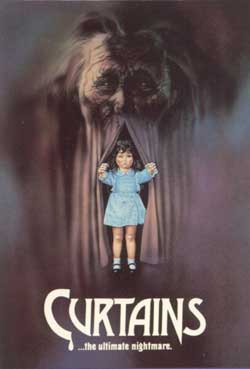 A group of actresses up for a highly-coveted movie role go to the director of the film’s mansion (which is in the middle of nowhere) to audition for the part. It isn’t all fun and games though, as the tensions arise within the group so does the body count. You see, a masked killer has targeted the group and is killing them off one-by-one. Is the killer a complete stranger or is it one of the actresses who is willing to go to any lengths to win the role?

One cold February day when I was a kid school was called off because of sudden snow storm. I was thrilled to death that I didn’t have to go to school so I spent most of the day watching television. I remember seeing the trailer for “Curtains (which featured a creepy-looking doll standing in the rain and grabbing a woman’s arm)” at some point that afternoon and it scared the hell out of me. I knew then and there that I had to see the movie (I was a demented kid) and was lucky enough to see it in theaters just a few weeks later. I absolutely loved it then and am happy to report that after watching it recently it really holds up nicely and I still love it. It is a very well-done slasher/mystery flick and in addition to having a great cast, and some pretty good death scenes, it is fun trying to figure out who the killer is behind the cool and spooky mask (which is one of the best-looking masks in any horror film, by the way).

“Curtains” is probably one of the most underrated slasher flicks of the 80’s. I am always surprised by how many so-called hardcore horror fans that I have talked to who haven’t seen it or even heard of it. I totally dig it myself and consider it to be one of the best horror films to come out of the 80’s (which is saying something considering all the kick-ass horror flicks to come out of that decade). There is a lot to really like about it and I think that it is a shame that it isn’t as well-known as some of the other horror flicks out there that aren’t nearly as good. Why do I like this movie so much? Read on, my friend.

First off, I just really like the basic premise of the movie. I am all for a bunch of people being stuck somewhere and being knocked off one-by-one by a masked killer. I also like my slasher flicks to have a bit of mystery about them as to where you have to figure out who the killer is, and “Curtains” covers that area as well. In addition, the cast is top-notch and every one (especially the wonderful John Vernon who plays the part of sleazy film director “ Jonathan Stryker” perfectly) does an excellent job. There characters are a little more fleshed out in this film than they usually are in most 80’s slasher flicks, and as a result they come off as a little more realistic and believable. The tone of the movie is a little more serious than most slasher flicks of this time period, and it works.

There are several cool death scenes, but one in particular really stands out that I feel that I have to discuss because it is awesome (spoiler alert ahead, folks). There is a bit where one of the actresses is out ice skating on a frozen pond by herself and is attacked by the killer. The scene sounds pretty simple and like nothing special on paper, but you have to see it for yourself. The entire scene takes place in the morning so it is shot in broad daylight, which really adds to it. As I mentioned before the killer’s mask is super creepy-looking and disturbing (it is an evil-looking old woman with long hair), and seeing the killer wearing it while ice skating toward the victim while holding a huge weapon is the highlight of the movie in my opinion. There is just something very cool about this scene that I always liked, and I think that a lot of other viewers will as well.

I think that “Curtains” is an unsung classic and I think that many people will agree with me after watching it. There are a lot of things to really like about it and I think that it will appeal to many horror fans out there. In a way I am glad that it is not so well-known as it means that it is less likely to be remade by some moron like Michael Bay, who would no doubt totally and completely ruin it. It has a little something for everyone, such as a compelling story, death scenes galore, and a nice little mystery to figure out (the identity of the killer is quite cool and I for one never saw it coming). Do yourself a huge favor and go find a copy of this movie. Just don’t be surprised if it ends up becoming one of your new all-time favorites by the time you are done watching it. You want to disagree with me you’re just being a douche for no reason and go kill yourself.