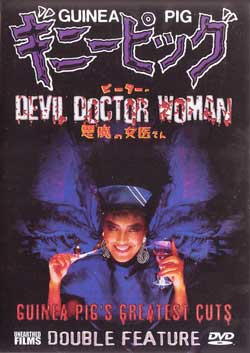 A nameless underground doctor who is given the moniker of ‘Devil Doctor Woman’ by her patients introduces nine of her most unusual cases in the form of a video diary. These ‘case studies’ include a family whose heads explode when they are subjected to insults, a man with a tumour with a human face, an internal organ-cum-stalker, a zombified man and a man who sweats blood. Unfortunately her cures are often more deadly than the ailments, and the title of Devil Doctor turns out to well-deserved.

Devil Doctor Woman/ Pītā no Akuma no Joi-san is not the worst film in the Guinea Pig series – that dubious honour goes to Android of Notre Dame/ Nōtorudamu no Andoroido (which although the last film in the series – if we discount the best of or worst of, depending on your opinion, feature Slaughter High/Ginī Piggu 7: Zansatsu Supessharu – was released before Devil Doctor Woman for a reasons unbeknown) – but is certainly not the one of the best either. By the time of Devil Doctor Woman, possibly as a result of the furore surrounding the first two films, the torture-p*rn aesthetics of the early films had been eschewed for all out slapstick gore albeit imbued with what could be seen as a subversive edge of socio-political critique. An implicit critique of the rigidity of the hierarchical structures of Japanese society at the time can be seen in, for example, the need of the family who make up the first case to maintain ‘face’ despite repeated insults, while the organ who stalks a beautiful young woman can be seen as representative of a problematic trend towards stalking and domestic violence in the 1980s. In both cases, Japan’s economic depression can be considered to be causational. 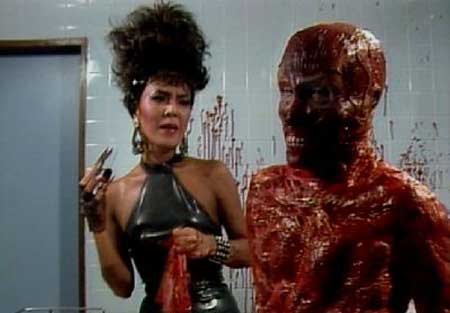 There is without doubt more than a touch of the carnivalesque to Devil Doctor Woman perhaps best exemplified by a cannibalistic buffet which occurs mid-way through the film. Here we have a wide variety of human organs prepared for human delectation including a cancerous liver, picked testicles and engorged labia: a feast certainly not for the faint hearted. In addition, a variation on Monty Python’s famous ‘Four Yorkshiremen Sketch’ consists of four men talking about their medical conditions. which degenerates into very broad scatological humour. 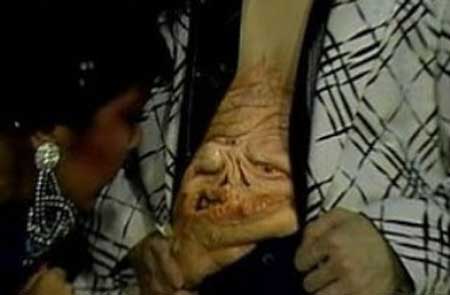 Without doubt two of the best ‘case studies’ are those of a zombified man, whose wife, despite his decaying state, insists on them going out on romantic dates. The pathos of this situation, which arguably provides the prototype for the contemporary zom-rom comedy, is counteracted by both visual and verbal humour. In one scene, when he is shopping with his wife for suitable attire for a date out, his wife tells him not to be ‘stiff’ to which he retorts ‘How I cannot be stiff, rigor mortis has set in’, while in a later scene while he is dining at an outdoor restaurant with the ‘Doctor’ (who is in the guise of her cleaner [it is too complicated to go into within this review]), he is sprayed with deodorant, and insect repellent along with having the indignity of having an air freshener stuck to his jacket. It is impossible not to find some humour in the visual and verbal humour that pervades this scene. 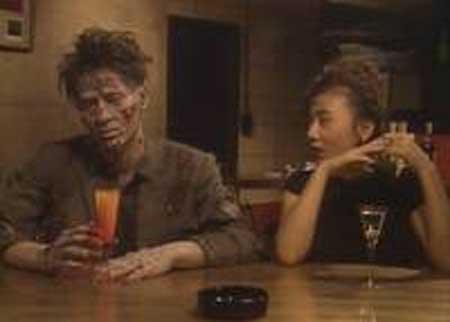 One of the main drawbacks with Devil Doctor Woman is the special effects, which when compared to the ‘realism’ of the bloody butchery of the earlier films, are pretty dire. It is easy to see that the exploding heads are false and that the bodies they are attached to are plastic. In this sense, it turns its back on what was the defining feature of the Guinea Pig films and the reason for their popularity. Once the films had transformed into slapstick, arguably there was nowhere left for the series to go.

And unlike the first few films, Devil Doctor Woman has a named director and performers. However Hajime Tabe’s directorial debut would also be his swansong, his only other credit is as a writer on Star Virgin (Ichiro Ômomo: 1988), another straight to video film (v-cinema). Playing the Devil Doctor herself is Peter, a well-known Japanese transvestite actor, who had previously appeared in Kurosawa’s Ran (1985), and whose camp performance is effective enough. Most of the actors are relatively well known; including the Japanese adult film star ‘Eve’ who also appears in He Never Dies. Unfortunately the presence of known actors does not prevent Devil Doctor Woman from being a bit of mishmash of a film, and one of the weaker entries in the Guinea Pig series. 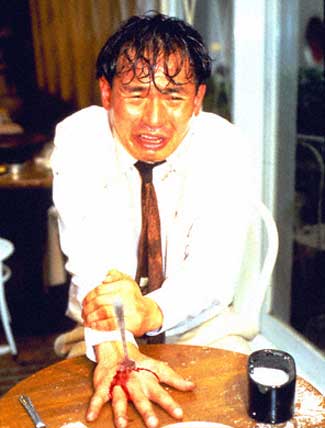 Would I recommend Devil Doctor Woman? Well it is better than Android of Notre Dame/ Nōtorudamu no Andoroido (1988), but that is not saying much. Certainly if you are a completist, than it is well worth checking out, but it is certainly not the film to see if you are wondering about the furore generated by the Guinea Pig series – the films to see are the first two: The Devil’s Experiment/ Kuma no Jikken and Flower of Flesh and Blood/Chiniku no Hana, both 1985. Despite the varied qualities of the films in the Guinea Pig series, I am a big fan. They are inventive and innovative and have played a pivotal role in the development of splatter and torture cinema. It is a shame that they are relegated to a footnote in horror cinema/television history. 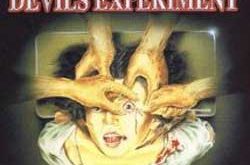 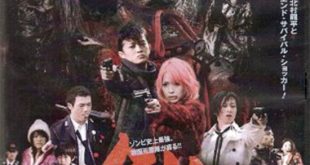 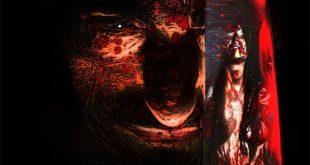