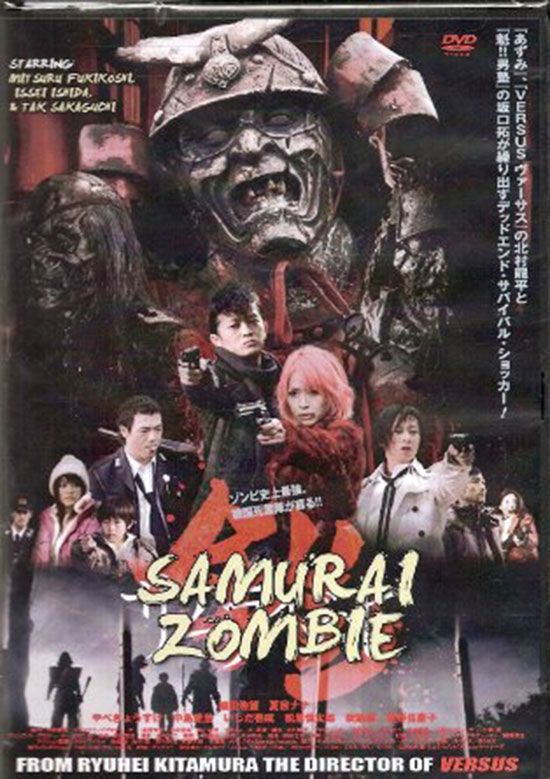 Yoroi Samurai Zombie AKA Samurai Zombie is a 2008 Japanese comic horror film directed by Tak Sakaguchi and written by Ryuhei Kitamura, who had previously collaborated on Versus

It’s safe to say that the most effective horror movies are the ones that wreak havoc on a happy family. It’s an old cliché that the genre is rotten with silly teenagers that are just begging to get hacked to pieces and therefore don’t deserve sympathy. Yet films like The Exorcist, Poltergeist, and The Hills Have Eyes strike a deeper emotional frequency because there are few among us that can’t relate to the characters. That makes any horror that befalls them, however impossible and fantastical, all the more harrowing.

Samurai Zombie begins with just such a lovely family on a road trip to nowhere in particular, enjoying the scenery and each another’s company. Father Shigeo is regaling the kids with how he met their mother and fate bringing them together, when suddenly a bloodied man staggers into the road and straight into their path. Despite his injuries, the man is back on his feet in an instant and points a gun at the car, only to himself be shot down by a pair of equally grungy punks. They promptly hop into the backseat and order Shigeo to drive. 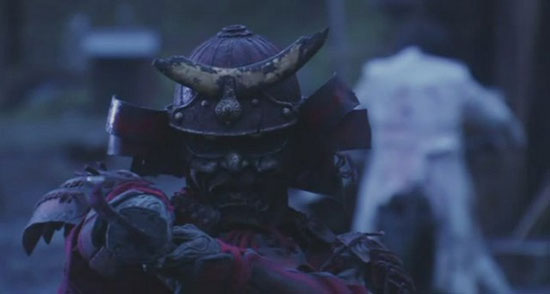 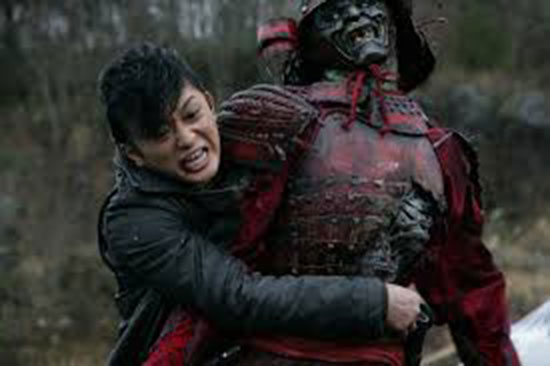 It isn’t long before the car travels into an area that causes the GPS to crash and the atmosphere to shift into noticeable weirdness, complete with a haggard old crone warning them of the danger that lies ahead. They realize too late that they have stumbled onto an unholy site known as Eight Spears Village, containing a long legacy of tragedies. Local legend tells of a maniac that beheaded eight people and was never caught. But another story lies further back in time, in the days of the samurai, and their need to avenge their own wrongful deaths.

The family dragged into the center of madness carries the heart of the film, despite their tagalong terrorists taking up more screentime. Jiro and Lisa are all gaudy attitude and little substance, clad in leather and lingerie that teeters between badass and ridiculous. They have the appearance of a Bonnie and Clyde pairing, but their actual relationship is foggy—while Lisa is clearly in love with her partner in crime, Jiro barely seems to like her. 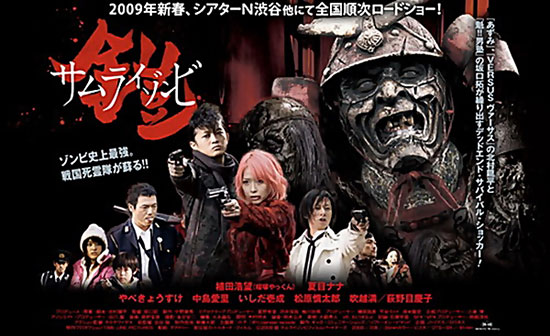 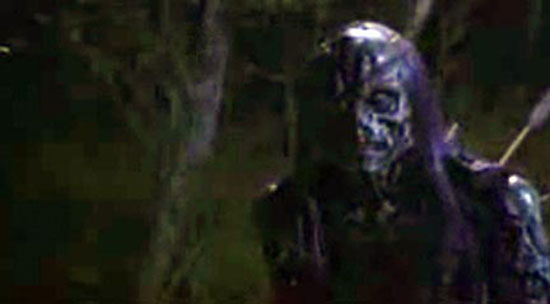 He wavers between leering at Shigeo’s teenage daughter and pledging his loyalty to Lisa, in between bouts of calling her an crazy bitch. Meanwhile, the victim of their hit and run—an old friend of Lisa’s–is hot on their trail all along the way, long past “should be dead” and practically a zombie himself (for no apparent reason).

Despite the silly teenagers that dominate the screen for most of the movie, Shigeo’s family keeps the story moving as they go careening into the land of the dead. The spilling of fresh blood summons the samurai from their graves, and the first sacrifice is Shigeo himself, possessed into cutting off his own head and letting his blood run into the soil of their burial mound. The ragtag group is then hunted and picked off by the samurai zombie, who uses their blood to wake his fellow slain warriors.

Samurai Zombie does hold all the wacky promises of its title, with samurai warriors rising from the dead, plenty of heads on spikes, and constant showers of hot-n-fresh blood. But what you never see coming with a silly zombie movie is a gutpunch of genuine emotion, let alone by way of a reincarnation twist at the climax. The end of the film is rather detached from the campiness up to that point, and instead ends on a surprisingly heartbreaking note. 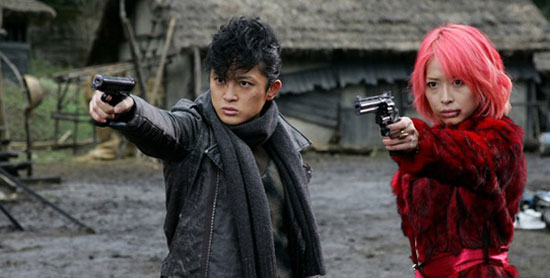 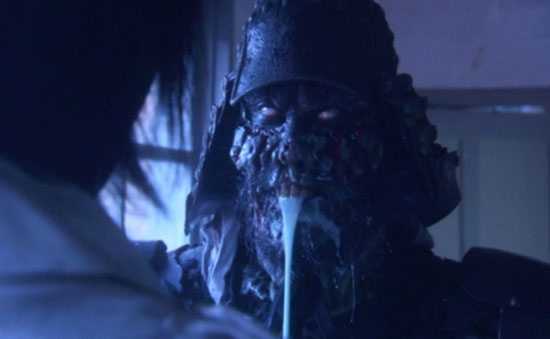 Aside from some lopsidedness in favor of inferior characters, Samurai Zombie is a mostly fun ride that leaves a little bit of sadness to go out on. The sweet family that gets dragged into hell is so effective on the screen because it is a fear many of us can relate to, whether we are the parent or the child. The idea of a monster tearing into our happy stable reality and destroying everything in an instant is a true nightmare, whether by carjackers, zombies, or ancient curses.