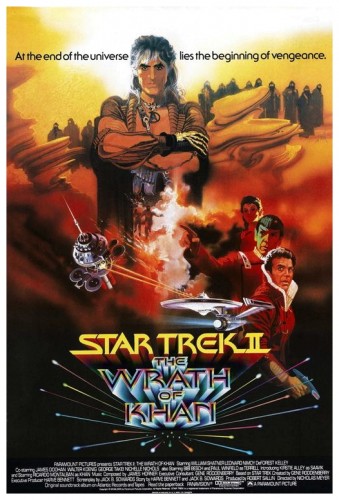 “In the second Star Trek film, Admiral Kirk is now a Starfleet Academy instructor, while Captain Spock serves as a cadet training officer, while being in command of the USS Enterprise. Meanwhile, scientists aboard Space Station Regula One are conducting the Project Genesis experiment, and the USS Reliant is assigned to the Genesis project. While surveying a lifeless planet in the Ceti Alpha star system, Commander Chekov and Captain Clark Terrell beam down to the sixth planet, and find a shocking discovery, in which cargo containers are located. Unknown to the Reliant crew was that the cargo containers housed refugees from the Eugenics Wars of 1997 Earth, with Khan Noonien Singh in charge. Khan later revealed that Ceti Alpha VI exploded, and shifted the orbit of the fifth planet as a Mars-like haven. Khan manages to hijack the Reliant, and manages to steal the Genesis Device. Admiral Kirk takes the Enterprise on a training mission, and is involved in a surprise attack, in which Khan vows to avenge his exile. Unfortunately, Captain Spock sacrifices himself to save the Enterprise from the premeditated arming of the Genesis torpedo, and after his death, his casket – a converted torpedo tube – was fired from the starship.” (courtesy IMDB)

The double-barrel success of both Star Wars IV A New Hope (1977) and Close Encounters Of The Third Kind (1977) proved to be a real game-changer for Hollywood and the film industry in general. These films immediately inspired many cheaply-made independent productions such as Message From Space (1978), Starcrash (1978) and Battle Beyond The Stars (1979) followed by more expensive Hollywood fare like Superman The Movie (1979), Alien (1979), Star Trek The Motion Picture (1979) and Star Wars V The Empire Strikes Back (1980). Soon every studio in the world had a science fiction project in production, and genre cinema reached a peak never seen before or since with the release of Blade Runner (1982), Conan The Barbarian (1982), The Dark Crystal (1982), E.T. The Extra-Terrestrial (1982), Firefox (1982), Mad Max II The Road Warrior (1982), Poltergeist (1982), The Thing (1982), Tron (1982) and at least a dozen other lower-budgeted (but equally important) films, all released in that golden year. The sixth highest-grossing movie that year was Star Trek II The Wrath Of Khan (1982). 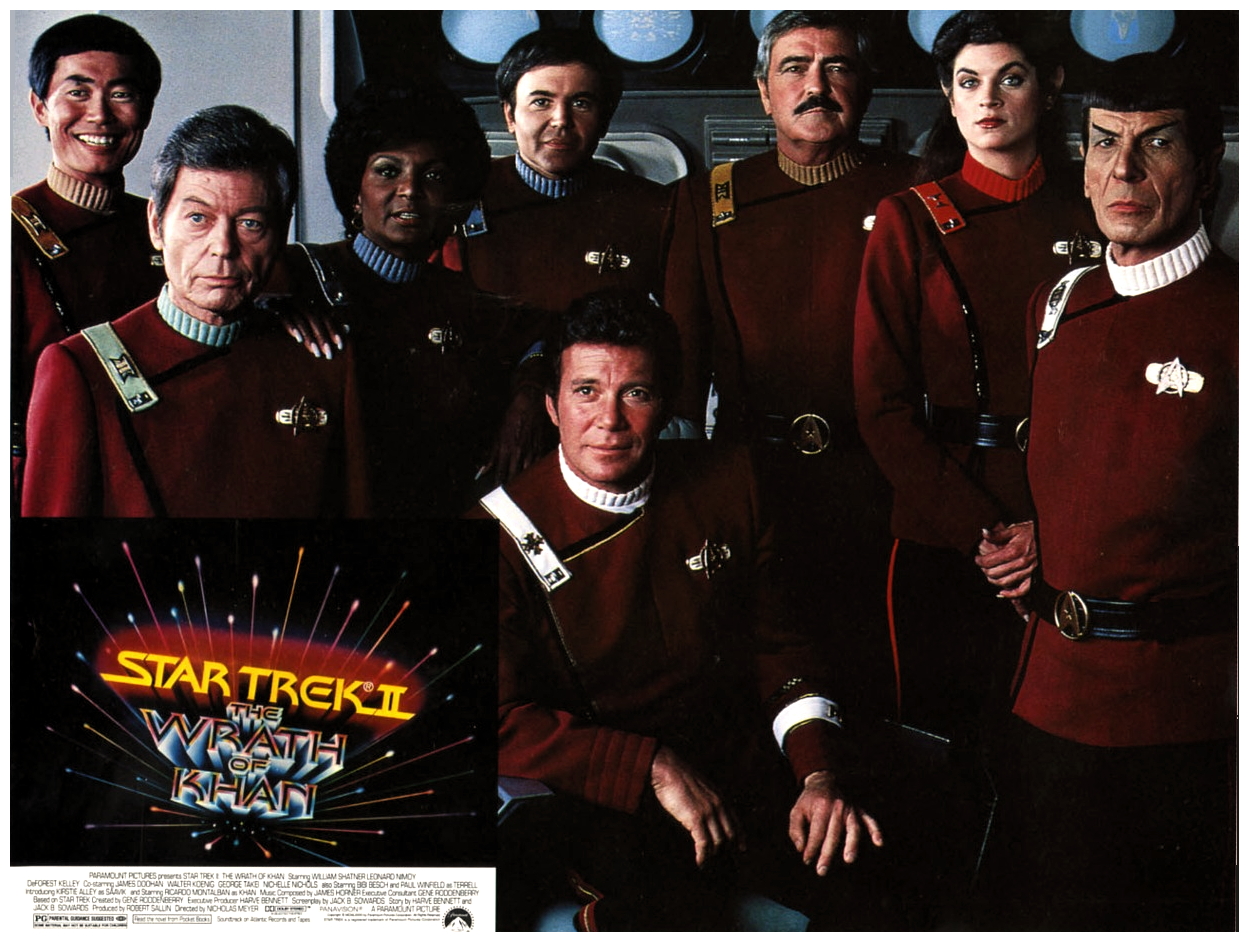 There was always going to be problems in transferring the slightly tatty ethos of television’s Star Trek to the big screen. The original stories had minimal special effects, concentrated on a jolly-but-stereotyped view of character, and every week gave a neat lesson about ethical behaviour thinly disguised in allegorical science fiction terms. It was all precisely engineered to the strengths and weaknesses of the small screen and, no matter how carefully the big-screen script was constructed, it would either be untrue to the flavour of the original (and upset the show’s many fans) or else the magnification would reveal its many flaws. Robert Wise directed Star Trek The Motion Picture (1979) in a way that gave maximum value to the technical romance of the film – long contemplative shots of various forms of mysterious space hardware – but he had problems with the story, which was essentially based on two of the original television episodes: The Doomsday Machine, about an implacable alien force heading for Earth, and The Changeling, about an old Earth space probe that has developed a form of autonomous life. There are many things wrong with the film, but one has to admire Wise’s nerve in telling a tale which effectively climaxes in a coruscating act of sexual intercourse between man and machine. I will not attempt to recount the events that lead to this touching apotheosis. 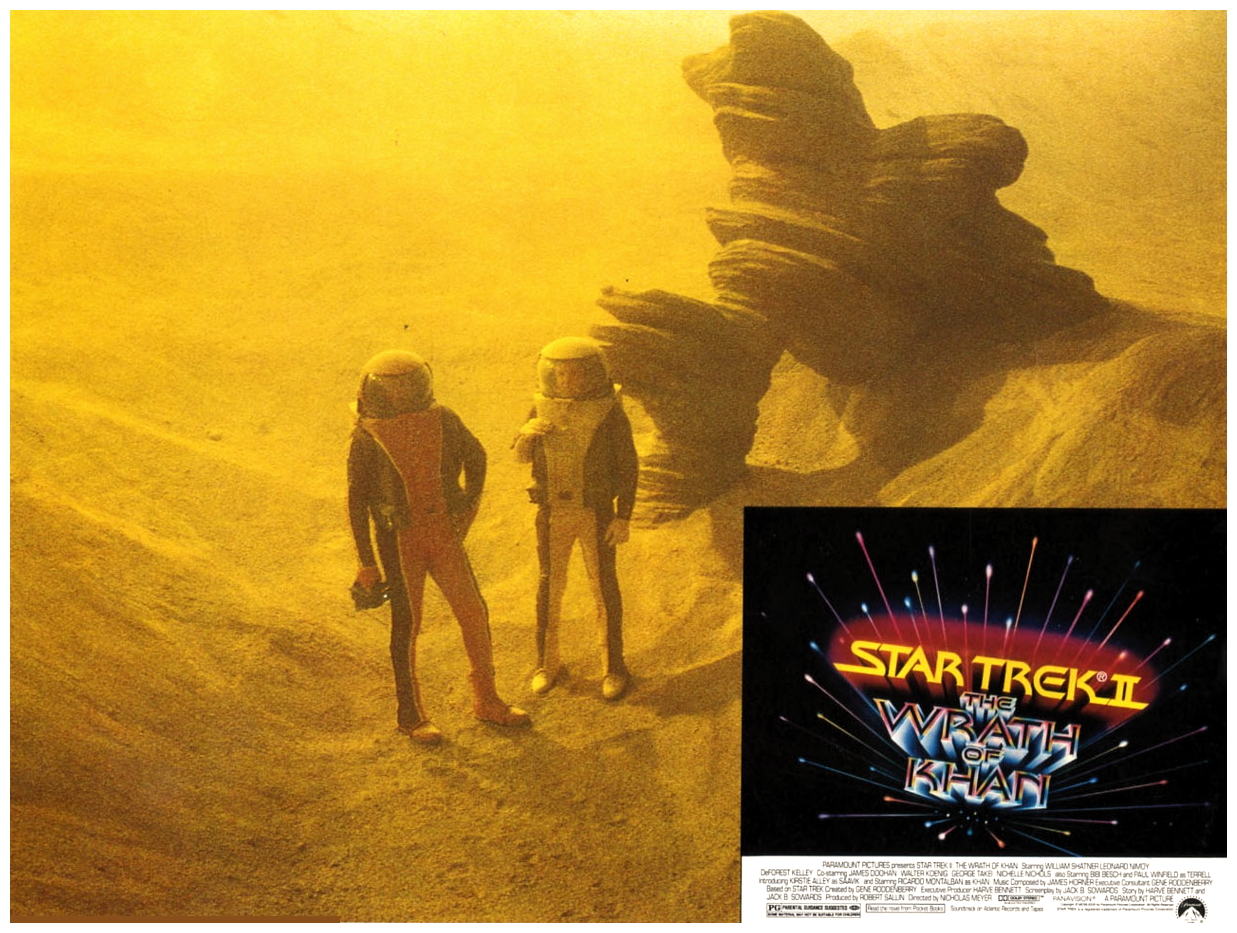 Many fans believe that the sequel, Star Trek II The Wrath Of Khan (1982) is the better film – it was certainly cheaper. Wise’s effort had cost Paramount an amazing US$46 million, although the cost was eventually recouped. Television producer Harve Bennett was called to a meeting that included Jeffrey Katzenberg and Michael Eisner, and was asked if he could make a better Star Trek film than The Motion Picture. More importantly, “Can you make it for less than forty-five-f*cking-million-dollars?” to which Bennett replied, “Where I come from, I can make five movies for that!” The sequel, which was filmed by Paramount’s television unit rather than a conventional film crew, came in at a mere US$11 million. The subsequent film did exactly what it was intended to do – it perfectly captures the flavour of the popular television series, even serving as a sequel to an original episode entitled Space Seed, in which Captain James T. Kirk (William Shatner) banishes the evil Khan Noonien Singh (Ricardo Montalban) and his family of genetic supermen to a deserted planet called Ceti Alpha V. 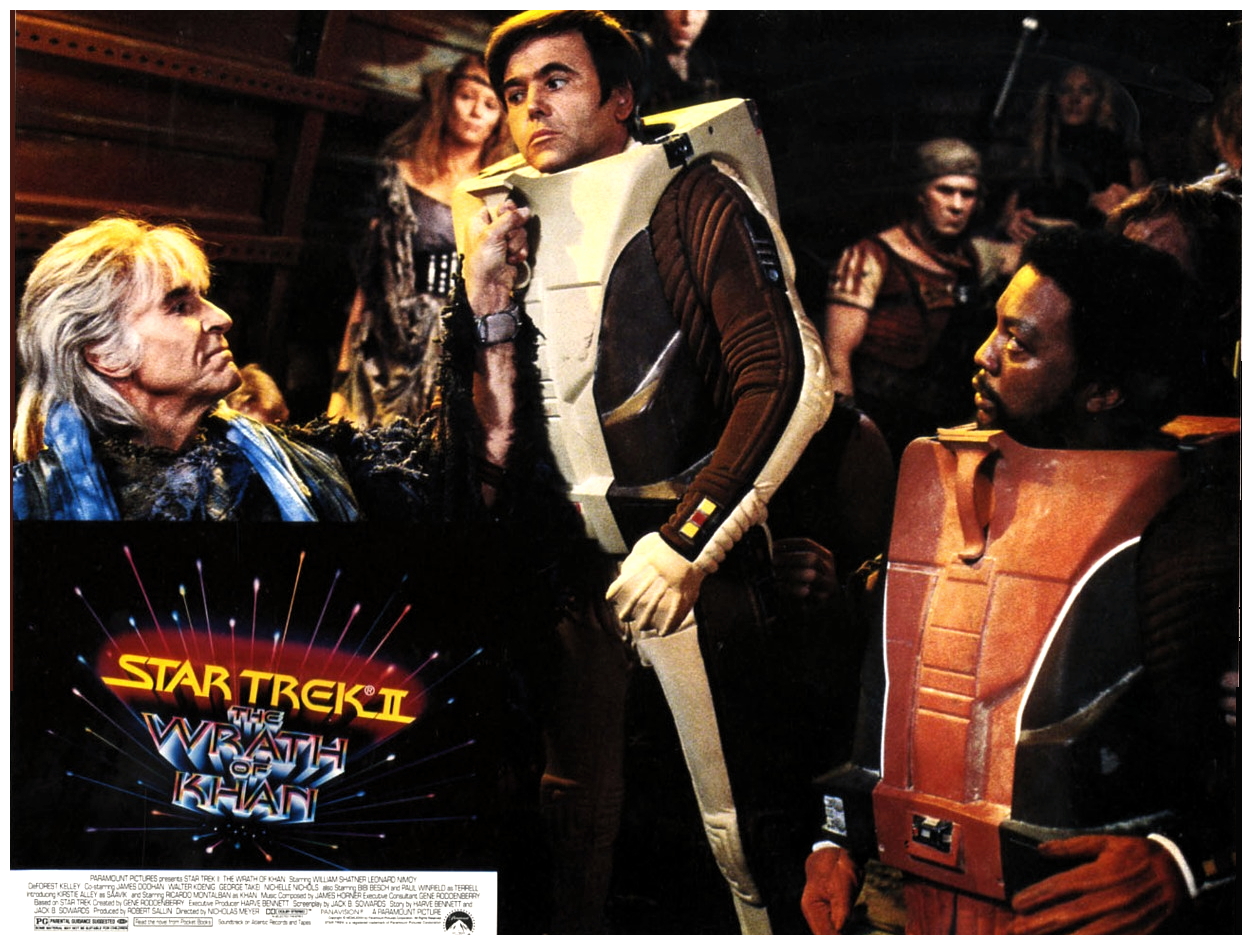 In the film, Khan escapes and vows revenge on Admiral Kirk for the death of his wife, a revenge made possible by the appearance of Kirk’s ‘family’: his former lover Doctor Carol Marcus (Bibi Besch) and their son David (Merritt Buttrick). The film uses birth and death motifs throughout and centres on the Genesis Device (which Khan steals) that has the power to convert barren planets into green Edens or to destroy fertile planets (like Earth). For others to live, some are willing to sacrifice their own lives, like Captain Spock (Leonard Nimoy). The film has an interesting premise, it has more humour than the original series (much of it self-depreciating), impressive special effects from the still-young Industrial Light & Magic, and a strong mad performance by Montalban. It also lets Kirk open up more than he has in the past, as he does while in conversation with his estranged son. 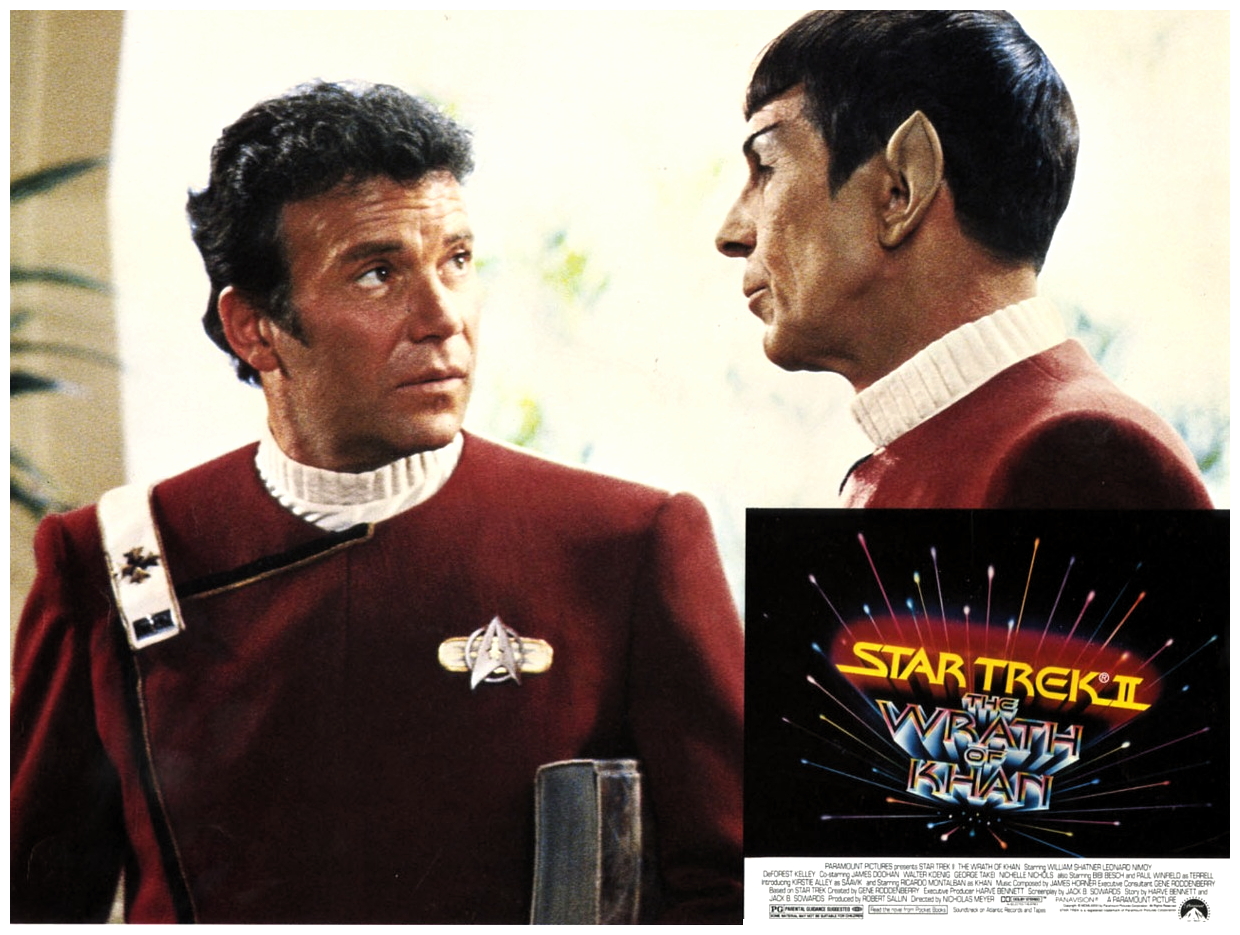 The film is smartly directed by Nicholas Meyer – whose previous credits include the critically acclaimed The Seven-Percent Solution (1976) and Time After Time (1979) – who had learned from the first film that Treksters are well aware that bigger is not necessarily better. At one point, the effects company Industrial Light & Magic required a completed script within twelve days. Meyer quickly wrote the screenplay uncredited without pay before the deadline and rapidly produced subsequent rewrites as they became necessary: “The chief contribution I brought to Star Trek II was a healthy disrespect. Star Trek was human allegory in a space format. That was both its strength and, ultimately, its weakness. I tried through irreverence to make them more human and a little less wooden. I didn’t insist that Captain Kirk go to the bathroom, but did Star Trek have to be so sanctified?” Perhaps his brightest decision was upping the comic-strip action content – The Wrath Of Khan is the fastest-paced and most violent of the franchise (including J.J. Abrams‘ recent efforts) and Montalban makes a suitably nasty adversary for Admiral Kirk.

Another smart move occurred when Leonard Nimoy was hesitant to return as Spock, arguably the series’ most popular character. Producer Harve Bennett coaxed Nimoy back into the fold by promising to kill off Spock, believing no actor could resist performing a dramatic death scene. When word of Spock’s death was strategically leaked to the fans, it spawned a huge amount of publicity that greatly benefited the film’s initial box-office take. The Wrath Of Khan is one of a rare breed in modern moviemaking – a holiday blockbuster that simultaneously thrills, enlightens and touches its audience. Clothing his actors in thick Napoleonic uniforms and bathing the sets in red mood lighting, Meyer creates a tense action picture anchored by its two charismatic stars. Montalban, whose magnetic vigour makes Khan a worthy adversary, and Shatner, whose true age imbues his swaggering hero with surprising depth and vulnerability. Adding piquancy to Shatner’s performance is his superlative work in the final reel, in which he and Nimoy perform one of cinema’s most powerful goodbyes. 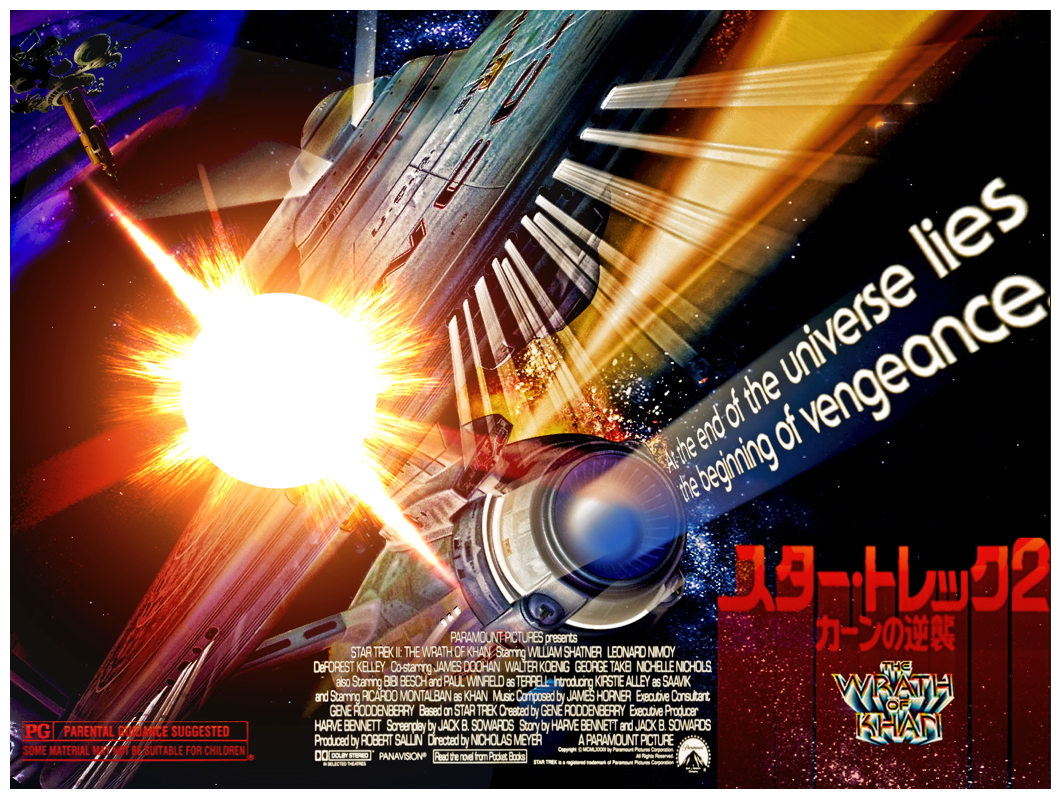 The rest of the bridge crew (DeForest Kelley, Nichele Nichols, George Takei, James Doohan, etc.) are ably supported by a fascinating cast of excellent character actors, including Kirstie Alley as Saavik (Spock’s potential replacement), Judson Scott as Khan’s supportive but level-headed son, and Paul Winfield as the mind-controlled Captain Terrell, who cut his acting teeth getting killed in lots of sixties television shows and went on to get killed in Damnation Alley (1977), The Terminator (1984) and Mars Attacks! (1996). One of the most important elements of any movie, as any good filmmaker will attest to, is the soundtrack, and future double-Oscar-winner James Horner is at his very best here establishing the musical cliches he would become famous for, but he got the job in a very roundabout way. He began his career by working for my old friend Roger Corman on Battle Beyond The Stars (1980): Roger insisted on a score that sounded like Jerry Goldsmith‘s soundtrack for Star Trek The Motion Picture (1979) and Horner delivered in buckets. Paramount executives were so impressed by what was essentially a rip-off, they hired him to score The Wrath Of Khan, eventually leading to Horner becoming one of Hollywood’s most famous composers ever.

The film did enormously well for Paramount, garnering not one but two direct sequels – Star Trek III The Search For Spock (1984) and Star Trek IV The Voyage Home (1986) – and a sort-of remake in 2013 but, in retrospect, its popularity and reputation may not be entirely deserved. Because it was shot by their television unit, the movie is filmed in a rather flat television style with muddy colours, and little weight is given to the symbolic possibilities of the melodramatic plot which are many: Kirk is reunited with his abandoned son David; Spock dies disappointingly though decorously after sacrificing himself for the crew; a space pirate named Khan believes himself to be Captain Ahab; the Genesis Device turns wastelands into paradise but can also be used as a weapon; loyal Pavel Chekov (Walter Koenig) has a mind-controlling alien earwig implanted in his brain; and Kirk quotes Charles Dickens (“It is a far, far better thing I do, than I have ever done. It is a far, far better rest that I go to than I have ever known.”). 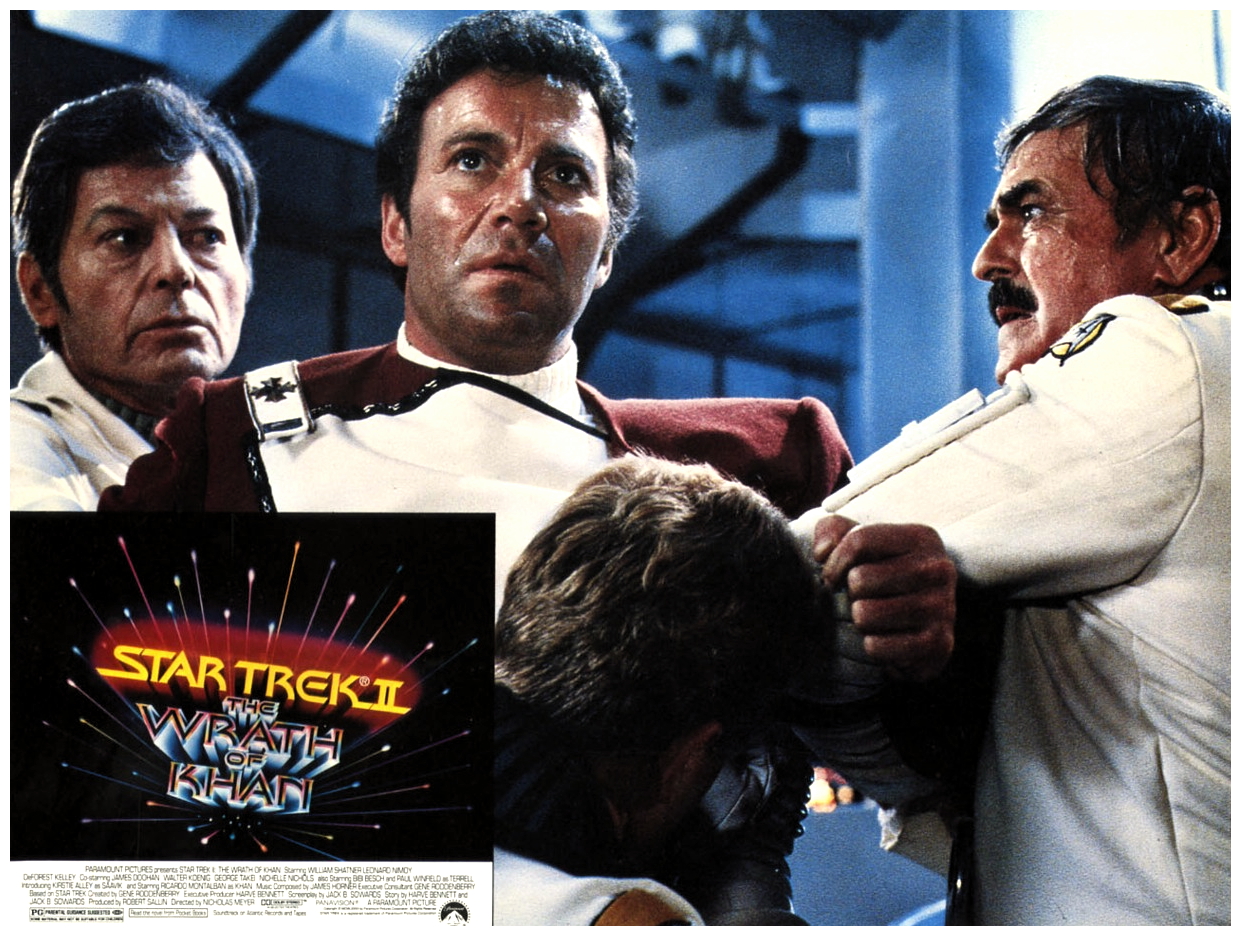 Fans will tell you that the film is good because the story is treated with more importance but, the trouble is, the story’s implications are given short shrift by the hurried episodic style which has none of the first film’s visual flair. The much-touted humanistic values of Star Trek here amount to little more than Kirk’s soft-faced gloom whenever he is placed in a moral dilemma, and a lot of sentimental stuff about self-sacrifice that could have come straight out of a sermon. Surely there is more to humanism than marshmallowy endorsements of such woolly uncontroversial precepts? Hold that thought right now – it’s terribly important that you bookmark Horror News now and come back next week because my horoscope said that unless you read all my reviews from now on, the Earth would be destroyed by a disaster of biblical proportions, real vengeance-of-God type stuff: Fire and brimstone coming down from the skies, rivers and seas boiling, forty years of darkness, earthquakes, volcanoes, human sacrifice, dead rising from the grave…you get the picture. Normally I’m highly skeptical of such claims, but I read it on the internet, so it must be true. So sleep well, enjoy your week and remember, the survival of the entire world depends on you visiting Horror News every week! Toodles!