A new scare fest coming at us from producer James Wan has just been kind of hanging around with no name. At one point it was rumored to be going under the title HOUSE OF HORROR but that didn’t seem to be going anywhere, well this morning STYD has confirmed a report that the movie will be called DEMONIC.

Starring Maria Bello and directed by Will Canon here’s what the film is about:

The story centers on the aftermath of a horrific massacre: five college students, brutally murdered inside a decrepit, abandoned home. Fresh on the scene, detective Mark Lewis and the police department’s psychologist, Dr. Elizabeth Klein (Maria Bello), question one of the few survivors who explains they were amateur ghost-hunters, seeking out paranormal phenomenon at the abandoned house, believed to be haunted. But what started out as a harmless activity turned into something truly terrifying, and the suspect claims the responsibility doesn’t lie with any of the inhabitants, but with the house itself.

Don’t have any release info for you yet but maybe now that the film has a name they can start marketing it. Keep it here and I’ll make sure you get any updates.

Here’s some artwork from almost 2 years ago, we’ll see what they come up with after the name change. 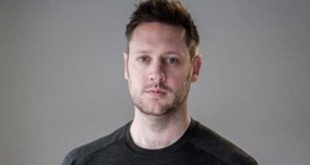