RIFFTRAX LIVE Giving NIGHT OF THE LIVING DEAD The Treatment

I’ve reported on RIFFTRAX events in the past but this one is gonna be special. If you’re not familiar with RIFFTRAX you should know that this is from those crazy bastards that brought us MYSTERY SCIENCE THEATER 3000 and what they do is pick a film and then add their own audio track that is always funny and often hilarious. Yeah, just like MST3K.

The last few years they have done a handful of theatrical events which are done live and are viewable at your local cineplex. Now the thing that makes this one special is this time around they are messing around with George Romero’s classic NIGHT OF THE LIVING DEAD.

The stars of Mystery Science Theater 3000® are back in select cinemas nationwide on Thursday, October 24th for only one night in a hilarious never-before-seen take on the zombie movie that started it all: Night of the Living Dead.

Join Michael J. Nelson, Kevin Murphy and Bill Corbett of RiffTrax.com on Thursday, October 24th LIVE at 8:00pm ET / 7:00pm CT and taped-delayed to 7:00pm MT/ 8:00pm PT for a hilarious riff on this masterpiece of flesh-eating mayhem! This one-night event will be your only chance to see the guys fire their wisecracking commentary at Night of the Living Dead on the big screen.

If you want to see if this event is playing in your area CLICK HERE for a complete listing. It’s pretty much everywhere so a pretty good chance you’ll find a spot close to you. Sounds like a great way to celebrate the Halloween season! 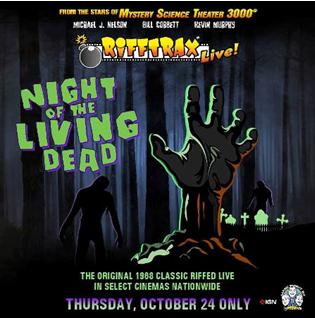