SYNOPSIS:
“The ultimate weapon which was meant to be safe for the mankind produces global side effects including time slides and disappearances. The scientist behind the project and his car are zapped from the year 2031 to 1817 Switzerland where he finds Doctor Victor Frankenstein and his contemporaries.” (courtesy IMDB)

REVIEW:
If there’s one person for whom ‘Living Legend’ is applicable in the department of genre films, it must be my old friend Roger Corman. A one-man movie industry, Roger has, since the sixties, directed at least fifty feature films, produced more than two hundred and distributed many more. Instead of working for a major studio, Roger has primarily produced his own films, many for American International Pictures in the fifties and sixties, then for his own company – New World – during the seventies. The fact that most of Roger films are referred to and dismissed as ‘exploitation’ by critics doesn’t do justice to the man’s accomplishments. Not only has Roger been responsible for many of the most enjoyable genre films of the fifties and sixties, he has also brought into the industry many of today’s most important filmmakers, including such luminaries as Allan Arkush, Paul Bartel, James Cameron, Francis Ford Coppola, Jonathan Demme, Joe Dante, Ron Howard and Martin Scorsese – and those are just the directors! 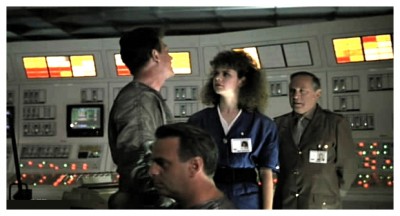 By the nineties Roger showed little sign of slowing down. Soon after publishing his autobiography How I Made A Hundred Movies In Hollywood And Never Lost A Dime he returned to work behind the cameras as director, his first project in this capacity in two decades: Frankenstein Unbound (1990). “A few years ago Universal Pictures had done some market research. As part of that research they tested various title ideas, and they tested the title Roger Corman’s Frankenstein, and it tested very well. So they called me and asked if I would like to do the picture and, as a matter of fact, I said I wasn’t particularly interested in doing it. But then Thom Mount, who had been head of production there, left to form his own company, and he called me. I had been thinking about it, and I said that if I could come up with something new – the reason I didn’t want to do it is that there had been so many Frankensteins, I didn’t want to be the hundredth version of Frankenstein.” 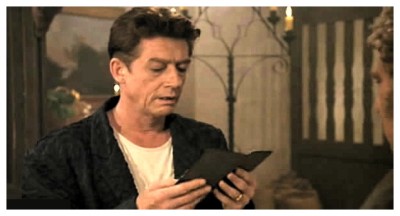 “I remembered a little bit later the book that Brian Aldiss had written in the early seventies called Frankenstein Unbound. I thought it was a good basic idea, and I had a couple of ideas of my own that I thought I could lend with Brian’s ideas and come up with something that would be quite original and, as a result, the final title is Roger Corman’s Frankenstein Unbound – so I made the film.” In the year 2031, Doctor Joe Buchanan (John Hurt) and his team are busy developing the ultimate weapon, an energy beam that will completely disintegrate whatever it’s aimed at. Buchanan hopes to create a weapon so powerful that it will end all wars and with the added benefit of having no environmental impact. Unfortunately, the prototype has unpredictable side effects, creating erratic weather patterns and rifts in space-time that have caused some people to vanish. As he drives home from the testing facility, Buchanan himself is caught in one such rift. 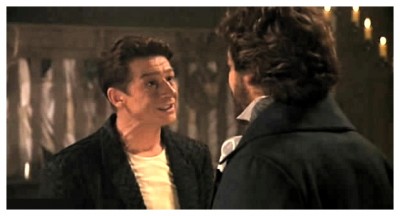 Buchanan and his car reappear in Switzerland in 1817. In a village, he meets Victor Frankenstein (Raul Julia). The men discuss science over dinner and it is revealed that Victor’s younger brother has been killed. A trial is to determine the guilt or innocence of the boy’s nanny Justine (Catherine Corman) who is suspected in the murder. Several villagers claim to have seen a monster in the woods and suggest this is the killer. Buchanan observes the trial and becomes interested in a young woman taking notes, who turns out to be Mary Shelley (Bridget Fonda), future author of the novel Frankenstein. Shelley gives credence to the talk of monsters, but the judge does not, and Justine is found guilty and sentenced to die at the gallows. Buchanan knows the Monster (Nick Brimble) killed the child and implores Victor to come forward and reveal the truth, but he refuses. Buchanan then asks Shelley for help, telling her that he’s from the future. They are attracted to each other, but Mary is afraid of knowing her own destiny, and chooses not to become involved. Buchanan is on his own.

He drives his car to Victor’s workshop and finds the doctor in discussion with the Monster, who has killed Victor’s fiance Elizabeth (Catherine Rabett), saying that if a mate was not made for him then he would deprive Frankenstein of his. Victor asks Buchanan to use his knowledge of electricity to assist in resurrecting the dead woman. Buchanan instructs the Monster to run cables to a weather vane on the roof. While the Monster is distracted, Buchanan re-routes some of the electrical cables to begin powering up the prototype laser in his car. As the lightning strikes the tower again and again, the battery on the laser begins to charge and the corpse on the table begins to move. At the same moment, the woman is restored to life and Buchanan’s energy beam is fully charged. He fires and the castle is destroyed, but the laser opens another space-time rift, sending Buchanan, Frankenstein and the two monsters far into the future. 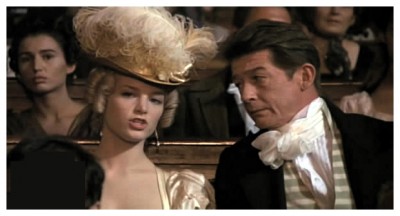 “I had never really planned to stop directing at all,” Roger told critic Stanley Wiater at the time, “I just felt in 1970 when I finished Von Richtofen And Brown (1971), that I had directed so many pictures I wanted to take a little time off. I would just take a year off. What happened was, I started New World Pictures during that time, and the company became successful faster than I thought it would, and I just stayed with the company. Every couple of years I’d say ‘Well, maybe I’ll direct a film now’ and I just never got around to it until finally, nineteen years later, I did it. I never intended to write the final screenplay. What I did was write the first draft of the script, and then F.X. Feeney and Ed Neumeier came in and did drafts after mine, based upon my version. What I was writing was primarily structure – I was interested most in putting into place the ideas that I wanted. F.X. and Ed then came in to polish the dialogue.” 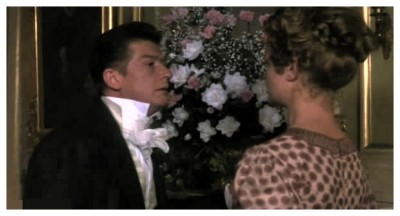 Speaking of dialogue, Frankenstein Unbound can get a little talky and philosophical but, then again, so was Shelley’s novel, and the film follows in that spirit. The links to Mary Shelley‘s book are limited, although the story essentially creates an alternate timeline which can excuse any alterations. Perhaps most interesting is the change made to Victor Frankenstein himself – no longer the wimpish helpless character that Shelley devised, here he becomes cold-hearted and scheming, repeatedly trying to kill his creation and eventually conspiring with it. This is most noticable in regards to the fate of the nanny Justine – Victor is well aware that the Monster killed his younger brother, and is keeping quiet to save himself. The Monster itself is also well written, at one point standing completely still as Victor loads a gun to shoot him, innocently unaware of what Victor is going to do. 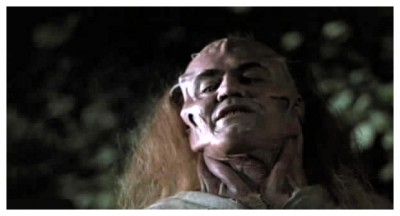 As the Monster, Nick Brimble portrays his part cleverly, innocence combined with rage and ignorance. This creature believes all people on the earth are creations of Doctor Frankenstein, so what difference does it make if he kills them or not? John Hurt gives a stunning performance as Joe Buchanan, especially during the climax when he and the Monster are blasted far into the future of a desolate world. We soon learn that this destruction is a result of his laser disintegrator, and when Buchanan realises his ‘monster’ has destroyed the entire world, he looks at the Monster and says, “I am….Frankenstein!” Although Raul Julia is given little to do aside from looking demented and acting insane, he does a damn good job of it. 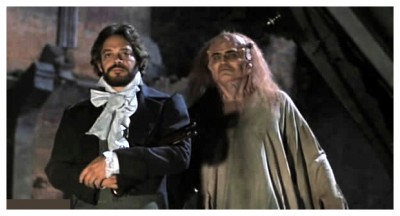 Bridget Fonda (whose father Peter Fonda got his start in Roger’s biker movies) and Jason Patric also do well as Mary Shelley and Lord Byron, who act as Buchanan’s debating conscience. The ending is depressingly disturbing, and will probably leave you thinking – you might even have to re-watch the final chapter to fully grasp the events that take place. Roger’s direction is decent and tells the story well – production values are very good (Roger always knew how to make the most of a low budget, and had a lot more than usual to play with here) with well-realised Nineteenth Century settings, some realistic looking gore and very nice futuristic sets, particularly towards the film’s climax. There’s also Buchanan’s futuristic super-car with its own artificial intelligence, and composer Carl Davis (best known for The World At War on television and his many silent movie scores) provides another good orchestral soundtrack. 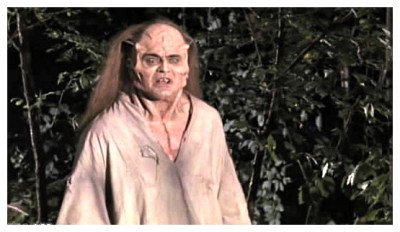 Mary Shelley would probably be shocked, and Brian Aldiss fans are unlikely to be satisfied by this rather liberal adaptation. Some good ideas are present, but shoehorned into a brief running time, much of which is wasted. All in all, Roger directs with the crispness that he lacked in his earlier low-budget films – perhaps he was a nineties director who was born a generation too early? At any rate he does a fine job here and, if you’re looking for a nice little horror film that will challenge as well as frighten, you could do worse than choosing Frankenstein Unbound. And on that rather upbeat note I’ll make my farewells and inform you that I’ll be back next week, whether you like it or not, with another bargain-basement B-grader to thrill you, chill you and fill you with swill for…Horror News! Toodles! 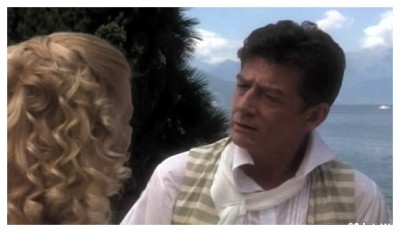