Home | A New Trailer Shows Up For ARGENTO’S DRACULA

A New Trailer Shows Up For ARGENTO’S DRACULA

Coming at us from IFC MIDNIGHT is iconic director Dario Argento’s take on the DRACULA mythos and in 3D none the less. The new trailer came along with a nice press release so read that first and then sink your teeth into the new video.

One night in the woods adjacent to Passo Borgo, at the foot of the Carpazi mountains, a couple of young lovers, Tania and Milos, secretly meet. On her way home, Tania is chased and overcome by a “dark shadow” that kills her. In those days Jonathan Harker, a young librarian, arrives at the village hired by Count Dracula, a nobleman from the area. Tania’s body mysteriously disappears from the cemetery. In the meantime Harker, before going to Count Dracula’s castle, takes the opportunity to visit Lucy Kisslinger, his wife Mina’s best friend as well as the daughter of the local mayor.

Upon arriving at the castle, Harker is greeted by Tania, brought back to life from the dead and made vampire, who tries from the very beginning to seduce him; however, they are interrupted by Dracula’s entrance welcoming Harker. The following night Tania tries again to bite Harker; she is close to his neck when she is stopped by the count, who gets the upper hand, and it is he himself who bites Harker’s neck, however allowing him to live. The following day, weakened but still conscious, Harker attempts to escape, but as soon as he is outside the castle, a large wolf with a white lock assaults and savagely kills him.

Meanwhile, Mina, Harker’s wife, arrives in the village and is guest for a few days at the home of her dearest friend Lucy Kisslinger, who will also be bitten and vampirized. The day after, Mina, worried about her husband, goes to Count Dracula’s castle.

Their encounter makes her forget the reason for her presence there. She is completely under the count’s influence; the count had orchestrated the events leading up to their encounter; in fact Mina looks exactly like his beloved Dolinger, who died some centuries ago. Upon her return to the Kisslinger house, Mina learns of the death of her dear friend Lucy.

The sequence of such strange and dramatic events summons the aid of Van Helsing, vampire expert of the techniques used to eliminate them. Van Helsing, aware of the circumstances, decides to act swiftly and prepares the tools needed to combat vampires. He directs himself to the center of evil, Count Dracula’s castle.

Meanwhile Dracula, in the village, kills the inhabitants who rescinded their pact, while Van Helsing, inside the castle, is able to definitively eliminate Tania. Dracula, intent on his desire to reunite with his beloved wife, leads Mina, completely hypnotized, to the castle where Van Helsing is waiting. He has decided to engage in a deadly fight with his evil foe. During the struggle Van Helsing loses his gun with the silver bullet, and Mina, still under Dracula’s spell, gathers it and tries to aid Dracula, but she misses the target and involuntarily kills him. The special silver bullet transforms Dracula into ashes; but his spirit lifts the ashes into the air and uniting, they shape into a large bat with a mocking grin. 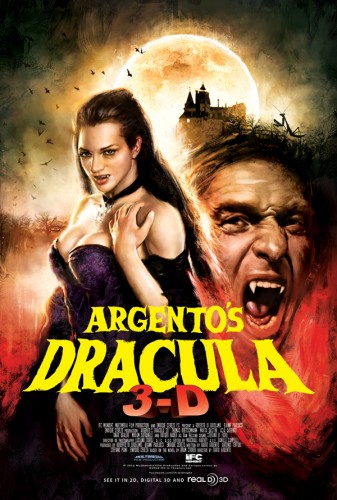