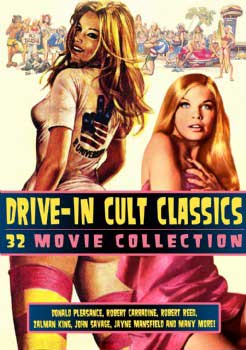 Wow~ what a calamity! 32 Drive in Grind-housy films . What a great way to have so much and yet keep the space on your DVD shelf minimized. Yes there are a few classic titles here that really make this a steal…if you havent spotted them, then you should check out…” The Creeping Terror”, “The Devil’s Hand” ,”the Hearse”…..with such fun titles as “The Pom Pom Girls”,  “The Pink Angels” and “They Saved Hitler’s Brain”. Mill Creek does it again by providing so much for so little…and no they didnt pay me to say that. Biker chcicks, killers on the loose, bad cinema, goo d cinema and cinema so bad its good that usally can only be found in higher priced collections that maybe feature 3-5 titles at best. If your like me, you’ll want to get caught up on your grindhouse legacies right now!