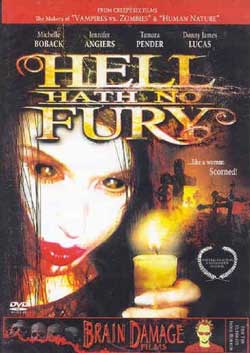 Two men tell (sometimes nasty or over the top) stories to each other about wronged women who went for revenge. The stories are about a man whose latest one night stand may be his last, a girl who may or may not have murdered her brother, a strange suicide investigation, a man who goes back in time to warn himself not to cheat on his girlfriend, and a nurse who takes gruesome revenge on her attacker

In the vein of horror anthology films like Creepshow and Tales From the Darkside, Hell Hath No Fury is a collection of shorts put together by the Canadian horror film company Creepy Six Films (other titles of theirs include The Hard Cut and Catholic Cheerleaders for Satan!). But whereas the predecessors give us wraparound tales featuring Blondie preparing to cannibalize a Lawrence kid, or a boy ordering a voodoo doll to torture his mean father, Hell Hath No Fury gives us an awkward and forced conversation in a coffee shop between a guy waiting for his mean girlfriend and a cowboy. If this sounds like a bad start, it is, and it doesn’t get a whole lot better.

All together, the movie fits seven short stories by four different directors into its one hundred thirteen minute running time. The first couple are very short and are introduced amidst other foretelling shots before the wraparound story officially begins. In the first, “One Night Stand,” gives us a quick story of a couple on a date that leads to the bedroom. Worried that it might become a one night stand, Christa ties Alan to the bed, and when he wakes up she discovers his dirty little secret. Even shorter is “Kim the Psycho Girlfriend.” Kim (played by the writer of the story, Linda Stang) is, as the title tells us, a psycho girlfriend who confronts her beau Bradley about love notes she found in the laundry. Her reaction is not favorable. Both of these sections are directed by Vince D’Amato, co-founder of Creepy Six Films, and both of them could have been left out honestly. The first one has a kind of cool idea but then ends very abruptly, the second is just pointless and filling time. Seeing as how the movie is already almost two hours long, we don’t need time fillers here.

Then we start getting into the thick of things. “Night Shift at the Coffee Shop” is the title of the wraparound story, featuring a couple guys telling each other stories. Also done by D’Amato, it is fairly unnecessary, as it would have made just as much sense to just show the short films with simply a title page (which is absent, and we don’t get the titles until the closing credits). There is more content to the wraparound than just the storytelling, but again, it is short and not very interesting. To make matters worse, the two guys talking (a guy meeting his angry girlfriend and a black cowboy) aren’t very good and the conversation is so forced as to make it near ridiculous. We hear cliché after cliché amidst bad, unconvincing dialogue, and the wraparound ends up just more wasted run time. 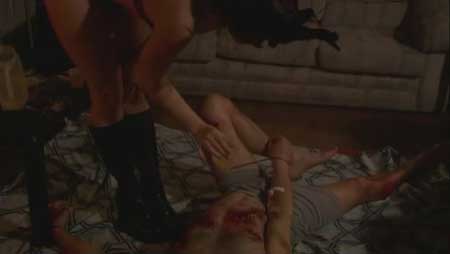 “Anna Lynn” is the first of the longer stories. Directed by Rob Carpenter (his first directing role after years of acting), we follow Kristen and Amy (Ariella Stroeber and Kieran Sequoia) as they ditch school. They run into a girl from the neighborhood named Anna Lynn standing outside her old house. Anna Lynn is the subject of many rumors. How did her brother die? What happened to her face? When they follow her inside the house, we find out what really happened to her and her brother, and forces beyond our understanding begin to work through Kristen to exact revenge. All of the actors do a fairly bad job, and so a story with potential ends gives us a couple decent moments before ultimately falling flat.

“Prey,” also directed by Vince D’Amato, opens with a guy getting a package in the mail. Then it cuts to scenes of him being taken away in a body bag. A woman lies dead, sliced up with scissors on a bed. Detective Angel gets attacked by Ken, the man who received the package, then she shoots him. Everything becomes black and white and something different happens. We learn that Angel is a hypnotist, and that the entire story is so convoluted so as not to make any sense. There are boobs covered in blood, a strange suicide, and possibly retribution, but this story makes no sense.

“Three Degrees Kelvin” is possibly the worst of the group. It is a story directed by Peter Speers about a guy who maybe goes back in time to stop himself from cheating on his girlfriend. I think. It is basically a dialogue driven story between Kelvin and a couple of himselves, but the dialogue is bad and the story never goes anywhere. It doesn’t follow the “theme,” which apparently was women’s revenge, nor does it have any shining moments. It’s just a guy bickering with other versions of himself about the movie he rented and philosophy. Easily skipped.

The final story is “Torched,” by Ryan Nicholson (Live Feed, Gutterballs, Hanger, etc…). This one is the stand out of the group. A nurse has moved into a new apartment building. One of her first nights there, she is raped. The very next night, someone breaks in and attacks her, but she fends him off and holds him as a prisoner. The story then goes back and forth between her at work testing DNA samples of the two attackers and her torturing the man in her apartment. As the story progresses, so does her anger. She puts urine in his IV, burns him with a blowtorch (in some very tender male areas), stabs his penis with syringes, and then makes his life even worse when she attempts to recreate the pain he caused her. But is he the right guy? Some reviews compare Hell Hath No Fury to rape revenge movies like I Spit On Your Grave and Thriller: A Cruel Picture, but “Torched” is the only part of the anthology that lives up to the hype, and in the typical Ryan Nicholson kind of way.

This movie feels every bit of the nearly two hours it runs, and overall, it is a bit of a disappointment. The acting is pretty bad, but it’s not like the actors were given much to work with. Most of the stories fall very short, sometimes making the viewer question how they fit the theme. There are some stories that have potential (“Anna Lynn” specifically), but they just don’t follow through. If you’re looking for blood, gore, and revenge, and your only option is Hell Hath No Fury, go ahead and skip ahead to the “Torched” section near the end. The rest, unfortunately, falls into the “filler” section of this one.