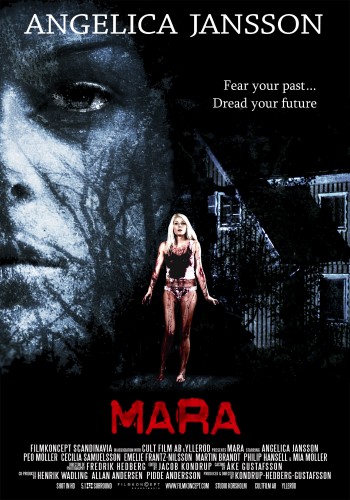 In the dark woods of Sweden, five young people are all alone in an old isolated summer cottage. What should have been a nice relaxing weekend soon becomes a living nightmare, as the party is haunted by something evil from the past.

Mara is a little Swedish film that can really play on your psychosis, trying to make you decipher what’s real or what’s just in the main character’s nightmares. At the end of the movie they give a definition for the word Mara; according to Nordic mythology, a supernatural, female creature who haunts you at night and is the cause of your bad dreams.

This could have lead the way to a great supernatural thriller, and also the movie isn’t dubbed into English, so be ready for some reading. At the start of the movie we get to see some random shots of trees in the woods as the main character does a voice over about her nightmares and how she can’t distinguish the different between reality and dreams anymore. This leads into a snow covered cemetery where we finally get to see the main character, Jenny (Swedish super model Angelica Jansson), she stops briefly at a grave maker and looks around, as if someone is following her. It turns out that there is a cloaked figure standing in the distance, we come to found out that this is her mother who is supposedly locked up in an insane asylum, or is she?

Then we get tossed into a black room with Jenny and the police inspector (P.O. Moller), where it is revealed that Jenny is covered in blood that she claims is not her own. So now we get the rest of the movie as a flashback, with Jenny and the inspector, breaking in to give us little clues as to how the story is going to end. The movie really begins as we see a house in the middle of the woods, where a “party” is already in progress, it’s more of a small gathering as it is only five people in the house. We get to meet the other four members; Cissi (Cecilia Samuelsson), Stina (Emelie Nilsson), Jakob (Martin Brandt), and finally Philip (Philip Hansell) who is only in about three scenes. They are all sitting around the table talking about sex; at this point we notice that Jenny is already a little fidgety.

We figure out why as they switch back to Jenny and the inspector talking, she and Cissi are cousins, and her and her mother took over the house when Jenny’s mom kills her dad. We are privileged to see a little scene of her mom doing so. It is told later in the movie that he cheated on her once he couldn’t take her nervous condition anymore, and that she had stabbed him 54 times. They show some crime scenes photos later and that estimate seems a little high from the looks of the body in the pictures.

Now we get to that night after the party has wound down, this is when all the weird things start to happen, unexplained noises, mysterious shadows moving, and the disappearance of everyone. That’s right, we get to see a couple of people from the group walking around the house, trying to figure out where all the load thuds are coming from, and then when Jenny wakes up the next morning everybody is just gone. Besides the two boiling eggs on the stove and the van engine running outside, there would seem that she could have been there by herself all along. Jenny tries to call her cousin on a nice old rotary phone, and only gets her voice mail, so she does the only smart thing and goes wondering around in the woods. This effort is futile though, as she comes back out at the house.

She ends up spending the rest of the day in the house, and of course when it gets dark out the lights don’t work. Jenny ends up running around the house trying to find the source of the tormenting sounds echoing though out the house. She also gets a visit from her mother, of is it just a figment of her imagination?

The ending did surprise me; it’s not the two very obvious choices for who the killer might be. It’s not the most over the top blood and gore movie and the story isn’t the most original thing that I’ve seen but it was still a pretty entertaining movie. I do believe that they only had a small budget to work with, and I say small budget because there is only a total of nine actors in this movie, including extras. So if you don’t mind a movie that you have to read a little bit, this might be one to watch if you have an extra hour and a half to kill.