ZOMBIE HUNTER Tracks Into A Video Story Near You In October

Got the info on the upcoming release of ZOMBIE HUNTER for all you walker fans. Check out what the press release reveals:

ZOMBIE HUNTER — a straight shot of pure Tequila, V8 muscle, Zombies from hell, sexy gals, ‘80’s synthesizer soundtrack and Danny Trejo — debuts on Digital, Blu-ray™ and DVD October 8th from Well Go USA Entertainment. In addition to Trejo (Machete, Grindhouse), the ‘80s B-movie-inspired horror/action epic stars Martin Copping (Victory Blvd) in the hard-drinking, muscle-car-driving title role, Claire Neiderpruem (The Crown and the Dragon), Jason K. Wixom (Chick Magnets) and newcomer Jade Regier, working with first-time director Kevin King. Set in a post-apocalyptic Zombie wasteland caused by the mysterious street drug “Natas,” the film follows the Hunter (Martin Copping), who has nothing left other than a beat up Camaro and a trunk full of guns and booze. He runs down Flesh Eaters, hunting for sport and redemption, while also running from his past. After crashing into a small group of survivors running low on resources, but led by an ass-kicking priest (Trejo), Hunter decides to lend a hand. But a surprise attack by the Flesh Eaters forces them on the run and puts Hunter’s skills to the test.

Synopsis:
When a street drug turns junkies into an army of giant, mutant flesh-eaters, no hope is left – but one man remains. Hunter’s (Martin Copping) got nothing left but a beat-up Camaro, a trunk full of guns and booze, and a vendetta. He crashes into a small group of survivors, led by an ax-wielding priest named Jesus (Danny Trejo). They’re searching for the Promised Land – but does it even exist? They better pray for a miracle, because the zombies are hot on their heels. And the psychotic clown with a chainsaw? You don’t even wanna know … 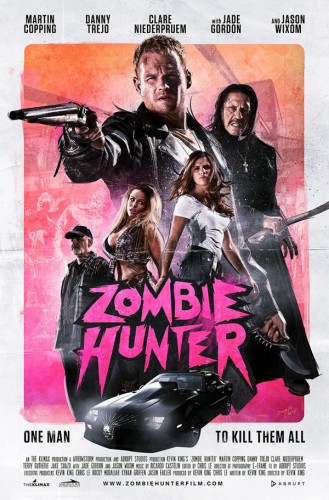