We talked about COOTIES a month or so back, remember? It’s the new one coming at us from Leigh Whannell and picked up Elijah Wood very early in the game. Tonight comes news of a rounded out cast, and it’s a good one.

Alison Pill, Rainn Wilson, Jack McBrayer and Jorge Garcia have all signed on the dotted line and will be along for the ride on COOTIES which tells the tale of a band of teachers who must defend themselves against a horde of mindless infected kids who have contracted some kind of disease from a bad chicken nugget.

Sounds like an interesting premise and I must admit, I love how Wood is sticking with the genre and they’ve done a great job of filling out the cast so this one is officially moving onto the “must see” list.

When asked about the genesis of this project writer Whannell had this to say: “My friend Ian Brennan and I wanted to write a film about one of life’s most universal experiences – hatred for precocious, adorable children. And so we started work on Cooties, a film about a virus that turns school children into monsters and therefore makes it okay to beat them up with hockey sticks,”

Keep it here, we are going to be all over this one! 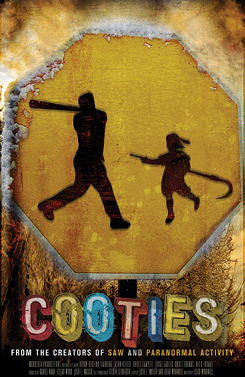