“A cyborg is sent from the future on a deadly mission. He has to kill Sarah Connor, a young woman whose life will have a great significance in years to come. Sarah has only one protector – Kyle Reese – also sent from the future. The Terminator uses his exceptional intelligence and strength to find Sarah, but is there any way to stop the seemingly indestructible cyborg?” (courtesy IMDB)

After seeing Star Wars IV: A New Hope (1977), a young man by the name of James Cameron quit his job as a truck driver and decided to enter the film industry. He wrote a ten-minute science fiction script entitled Xenogenesis (1978) and raised enough money to rent a camera, lenses, 35mm film stock and studio time. To understand how to operate the camera, he dismantled it and spent the first day trying to figure out how to get it working again. On the strength of his work as director, writer, producer and designer on Xenogenesis, he was given his first official industry job as production assistant on Rock And Roll High School (1979) directed by Joe Dante and Allan Arkush, and produced by my old friend Roger Corman. While continuing to educate himself in filmmaking techniques, Cameron started building miniatures at Roger’s studio, teaching him to work efficiently and effectively making rapidly-produced low-budget films.

He soon found employment as art director/effects designer on John Sayles‘ Battle Beyond The Stars (1980), John Carpenter‘s Escape From New York (1981), Bruce Clark‘s Galaxy Of Terror (1981) and Don Keith Opper‘s Android (1982). Cameron was hired as the effects director on Piranha II: Flying Killers (1981) but the original director (Miller Drake) left the project due to creative differences with producer Ovidio Assonitis, who then promoted Cameron to director. Shot on location in Jamaica, there were many delays due to numerous problems, not least the adverse weather, and Assonitis had to take over editing duties after Cameron was struck down with food poisoning. During his illness, he had a nightmare about an invincible robot hitman sent from the future to kill him, giving him an idea that would change his career forever.

After his inauspicious gun-for-hire debut on Piranha II, The Terminator (1984) is the first real Cameron movie, a blast of action, horror and science fiction that will mark all of his best films, from Aliens (1986) and The Abyss (1989) to Terminator II Judgment Day (1991) and Avatar (2009). This modestly-budgeted science fiction thriller deservedly became a box-office smash, cult favourite and a ’cause célèbre’ of critics who compared it to such films as Mad Max II: The Road Warrior (1981) because of its bone-crushing violence, non-stop action, unrelenting suspense, black humour, vision of a bleak post-apocalyptic future, and obvious marriage between the filmmaker’s gadgetry and the gadgetry/machinery that dominates the screen. 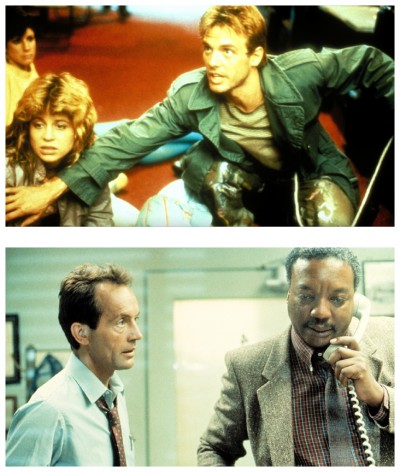 Cameron’s screenplay, co-written by producer Gale Anne Hurd, begins in 2029 when the world is in rubble due to a nuclear holocaust initiated by the machines and the lengthy continuous war between Man and Machine. When the machines determine they’ve lost to the human rebels led by John Connor, they send a sophisticated ‘Terminator’ cyborg (Arnold Schwarzenegger) back in time to present-day Los Angeles to kill Sarah Connor (Linda Hamilton) before she can give birth to the person who would cause their defeat forty-five years later. John Connor sends back a young warrior named Kyle Reese (Michael Biehn) to protect Sarah and explain to her the important role she’ll play – not only giving birth to John but also teaching him how to be a warrior and a leader. Since Reese hasn’t got the weapons to destroy a Terminator, he and Sarah are constantly on the run with the seemingly unstoppable cyborg always hot on their trail.

“That Terminator is out there. It can’t be bargained with, it can’t be reasoned with, it doesn’t feel pity or remorse or fear, and it absolutely will not stop – ever – until you are dead.” As played by Arnold Schwarzenegger in a career-defining performance, the Terminator is an unstoppable merciless killing machine, a Jason Vorhees with high-calbre firearms. Like an angel of death, it kills everyone in its path, and its relentless dedication to the mission makes it a terrifying figure indeed. This brings The Terminator very close to being a horror movie, especially in its prolonged slasher-like culmination in which, even when reduced to a bare metallic endoskeleton, the damned thing keeps coming back, running and crawling after Sarah Connor, portrayed with a perfect blend of frailty and perseverance by Linda Hamilton. 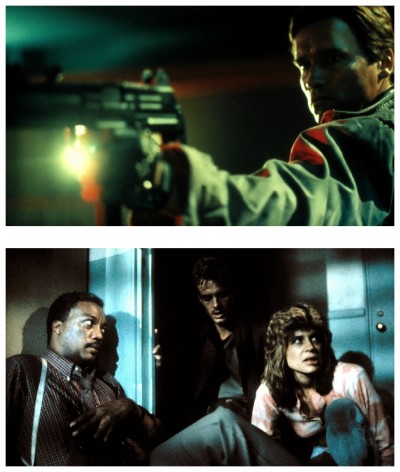 Cameron keeps the tension high by cleverly complimenting his exciting visuals with jarring sounds: tyres screeching, glass shattering, guns blasting, cars crashing, trucks exploding, sirens blaring, engines revving, objects crushed, people screaming. Most terrifying of all is the Terminator itself, without fear or feelings, it kills in broad daylight, in plain view – instead of getting frustrated when its quarry escapes, it just immediately resumes the chase. With his peerless physique, foreign accent and completely unsympathetic demeanor, Schwarzenegger (who was first offered the role of Kyle Reese but refused) makes the Terminator into one of the great cinema villains, one for our nightmares. Interestingly, Michael Biehn has a comparatively slight build, an indication that Cameron deliberately chose not to go along with the macho-hero trend that was prevalent in the eighties.

Thematically, the film has a rather liberal point of view, its heroes are revolutionaries – as played by Hamilton, Sarah is a strong woman who has to deal with becoming a single mother. It also has an anti-nuclear bias, evident in its anti-technology stance. While the Terminator is the ultimate machine of the future, constructed during a time when machines and weapons are the same thing, Cameron bombards the viewer with images of other machines to show our growing dependency on technology: cars, trucks, tractors, motorcycles, guns, elevators, telephones, answering machines, televisions, video recorders, hydraulic drives, etc. Despite its anti-war stance, the film also appeals to the soldier-of-fortune crowd and those guys who crush beer cans on their heads. They probably consider the Terminator their (fascist) hero, enjoy the spectacular gunplay and are aware that the film is punctuated with pain. Unlike the Terminator, the human characters feel the effects of being shot, stabbed and injured repeatedly. After a while the viewer may actually sense the pain they feel, so obvious is their agony.

Like most graduates of Roger Corman‘s school of filmmaking, Cameron learned to keep the audience eye entertained by utilising interesting character actors. Playing the police detectives in charge of the case we have Lance Henriksen – a veteran of almost two hundred genre films and television shows from Close Encounters Of The Third Kind (1977) to Alien Versus Predator (2004) – and Paul Winfield, who cut his acting teeth on sixties television and went on to get killed in Damnation Alley (1977), Star Trek II: The Wrath Of Khan (1982) and Mars Attacks! (1996). There’s also Dick Miller as gun salesman Walter Paisley, a reference to Roger Corman’s film A Bucket Of Blood (1959) which starred Miller as Paisley. A favourite amongst Corman’s stable of actors, Miller can be found in every Joe Dante film from Hollywood Boulevard (1976) to Looney Tunes Back In Action (2003). Finally, you should keep an eye out (ow!) for Bill Paxton as the Terminator’s first unfortunate encounter with Los Angeles nightlife. Over the last four decades Paxton has worked his way up from being a set-dresser and experimental filmmaker with Billy Mumy in the seventies, through to becoming a full-blown director of frightening feature films like Frailty (2001). 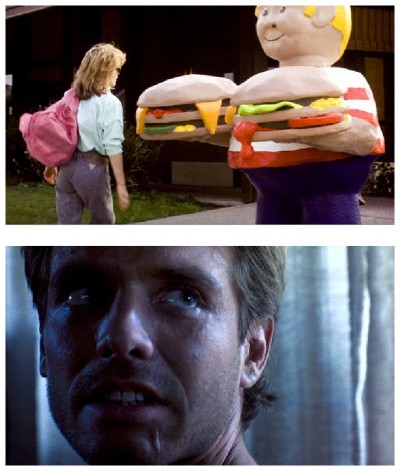 The history of the story is a convoluted one involving Cameron’s dream of the Terminator and author Harlan Ellison‘s short story Soldier, adapted as an episode of The Outer Limits television series. Ellison threatened to sue the distributor Orion Pictures for plagiarism and, against Cameron’s wishes, settled the matter out-of-court for a substantial amount of money and a screen credit stating “The producers wish to acknowledge the works of Harlan Ellison.” A very good science fiction story indeed, but you’ll find little similarity between Soldier and Cameron’s movie. In my humble yet always accurate opinion, to find the real source of The Terminator you must seek out a film entitled Cyborg 2087 (1966) starring Michael Rennie as Garth, a cyborg from the future who travels back in time to 1966 to prevent a scientist from revealing his new discovery which will make mind control possible and create tyranny in Garth’s time. Garth is also being pursued by two cyborgs known as Tracers out to stop him, but that’s another story for another time. Right now I’ll ask you to please join me next week when I have another opportunity to force-feed you more unthinkable realities and unbelievable factoids of the darkest days of cinema, exposing the most daring shriek-and-shudder shock sensations to ever be found in the steaming cesspit known as…Horror News! Toodles! 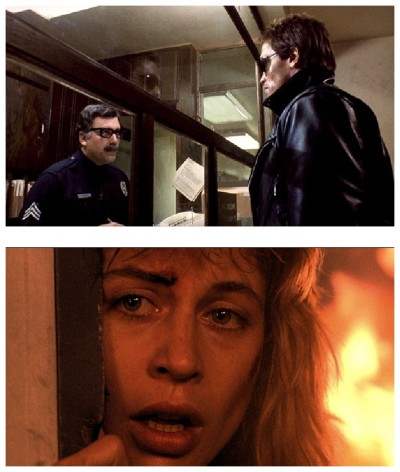