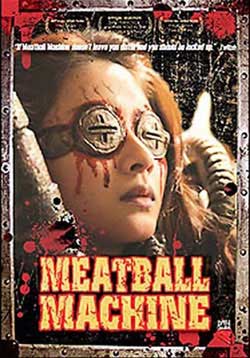 A new romance between factory workers Yôji (Issei Takahashi) and Sachiko (Aoba Kawai) is going well — that is, until aliens invade Earth and implant themselves into tumor-like growths on human shoulders. When Sachiko is attacked and transformed into a slave cyborg, it’s up to the half-infected Yôji to rescue his lover. Co-directors Jun’ichi Yamamoto and Yudai Yamaguchi surround their tender love story with a rollickingly gross splatter-fest.

If the title itself doesn’t grab you then you shouldn’t be playing with the big boys, Almost instantly without further investigation you know your gonna be on a hyper cyber-punk asian ride with this one. To set the mood, it starts with a hanging and then a Battlebots chop fest as 2 cyber warriors dressed in all kinds of trash-can paraphernalia go at it ending with a nice pear slice move to the the skull. Let the gushing begin….and that it does.

This GWAR-style super hyper mix of cosmic war machines is a fun and gory film that is almost harder to explain than to describe. We begin with these parasite beings that travel around in Spider-tank vehicles to find fresh hosts. Upon contact, they attach themselves in front like a alien Hugger while there spaghetti tentacles take over there victims. The process is a weird worm parasitic attack on the human body that transforms it into a living machine of organic fury. Two Arms pop out, gouge out the epees and replace them with metal cylinder disks. The rest is controlled from inside the host as the parasite produces weaponry and all sorts of weird appendages. How’s that sound for a quickie?

Now the story, if there really is any focuses on Yôji, a engineer who brings one (spider tank) home to study. As he invites over a girl (Sachiko) he has been admiring, the dormant parasite vehicle attacks her and turns her into one of these walking GWAR creatures. With her newly deformed industrial outfit, she goes on a rampage taking out victims left and right. Yôji trying to come to a solution to save his former love interest, comes upon a man who has been breeding these things to feed his daughter who was afflicted at one time. The parasites take over Yôji but only half way as he storms out in his new cyber body. As we follow these newly designed organic machines, a confrontation is inevitable between the two. Somewhere in this madness a perverted love story also ensues as the 2 fight o hold on to there humanity even in the worst of conditions. Sachiko begs to be killed as her alien host tries its best to overcome her and introduce new weapons. One of them being a saw wielding arm and a fire shooting, bone dart throwing gun. Yôji in his emotional state manages to grow new weapons of mass destruction including a giant chest cannon that kicks ass into next week. Now if that isn’t fun times for ya, I don’t what is.

Ok, there ya go with the ninja-scifi-creature explanation. Let’s just say this film pulls all the stops as a gorefest that has fun doing it. Weird is almost a tame classification. It’s cyber-madness at its best! In other ways it reminds me of a f*cked up Godzilla film turned on 10…its really all those things and more. Our story does come full circle with a reveal of the aliens plot to overtake the human race in these “necroborgs” as they are called. Though after testing the vessels on earth a decision is made to progress to the next level code named “Meatball Machine”. I will say the FX work in this is amazing, using more traditional costumed based models than any CGI tricks. It really is a tribute to old school even though its presented as a modern mix-up.

The work and camera positioning are truly a trait found in the Asian history of monster making, that is presented in a upgraded blood spewing way. The camera work is inventive though it also gets repetitive at times using similar angles throughout. This is partly due to composing the shots in a way that plays to the camera without revealing the process.

The DVD extras show the filming and Fx work which is fun to watch as they go about bringing this madness into cinema. I for one loved it, though too much of these styles can wear a bit heavy as well. 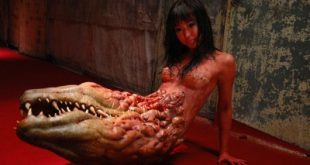