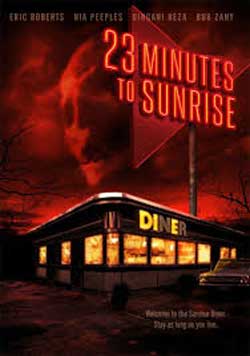 They say the darkest hour is just before dawn, and at the Sunrise diner it’s very late indeed. Four couples find themselves at an out-of-the-way 24-hour diner, but they are not all that they seem.

I have to point this out right off the bat: a horror movie this is not. If you look hard you could argue there is a horror element or two in there, but overall what we have here is a character study. Actually, characters study. Plural. A slow build drama that reaches its boiling point just before sunrise. It may not be for everyone, but in the end I would have to say I enjoyed this movie, despite an ending that is somewhat frustrating. 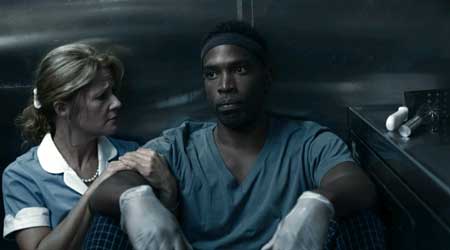 Maybe that’s the point, odd as it sounds. 23 Minutes To Sunrise basically takes eight people with various issues and throws them into a twenty-four hour diner. Each one has a problem but only one of them has the ultimate solution. Is it worth it?

Clocking in at just over an hour, 23 Minutes To Sunrise is in no rush to reach the end. With one main set, it makes sense that you end up with a dialogue driven movie. Which isn’t an issue if the characters are interesting. Thankfully they are. 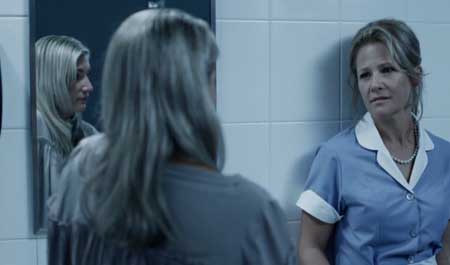 Eddie is our main focus as an honorably discharged veteran who searches for some meaning in his life. He’s the cook at the all night diner, working the graveyard shift every night with Sheila, the waitress who’s in an abusive relationship yet clings to the belief that there’s a better world for her out there.

Next up is the middle-aged married couple who are on the verge of divorce. Then there is the young punk kid who loves holding up stores, buying lottery scratchers and hatching a plan to live a life of ease once he and his girlfriend make it to Vegas.

And last, but definitely not least, are the mysterious pair of Daniel (played by Eric Roberts) and his much younger female companion. Just what in the world is up with these two? For the moment, all we know is that the girl wants out. Wants a normal life. Daniel will grant her wish, but she has to find someone to take her place. And she only has twenty-three minutes to do it. 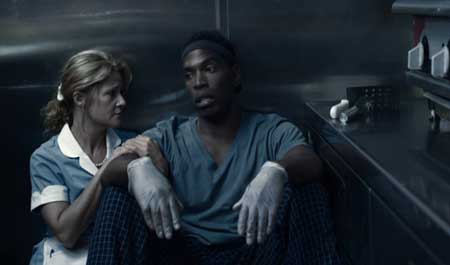 If you don’t mind slow pace, dialogue heavy movies, I think 23 Minutes To Sunrise is worth checking out. It’s not without some faults but in the end I was left satisfied. Having said that, I felt the ending could’ve wrapped up things a little tidier. Heck, I’m not even sure what happened to two of the characters. But it didn’t ruin the whole movie for me. Some viewers will absolutely hate the movie for the way it ends.

I will say there are some great lines in here. But for me the funniest part of the movie has to be three bumper stickers on the young punk’s car. I won’t give away all three but one of them simply says “Recycle Your Pets,” with a drawing of a cute cat in the corner. Along with the other two, I can’t think of a better way to sum up an entire character before we even meet him. Good stuff.

Director Jay Kanzler does a good job directing and he also chipped in on screenwriting duties. The acting is pretty good, with Eric Roberts leading the way as the fascinating and mysterious Daniel. Part of what made the film interesting was waiting to see not only who he really was, but what he might do. 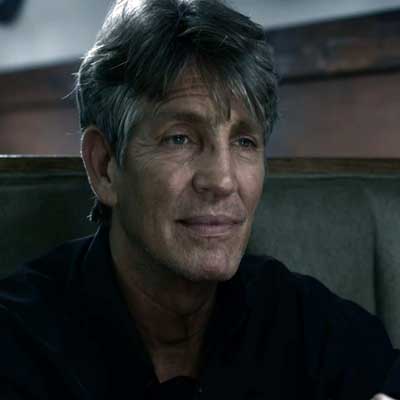 Despite some of its flaws, I would say rent this if you can get it cheaply. It won’t be for everyone and as mentioned, please be warned of the end. But as the film moves slowly towards the climax, and the interactions of the characters becomes more intense, you’ll find yourself being drawn in and if nothing else, damn curious to find out how it will explode in the last ten minutes. Who will live, who will die, who will sacrifice, who will get what they want? Maybe none of them? Maybe some of them? Whatever the answers, sometimes it’s the questions that can be more fun.