This past May 10th, 2013, Doc Rotten sat down with Naomi Grossman, who plays Pepper in American Horror Story: Asylum, at the Blood at the Beach 3 convention in Virginia Beach, Virginia. The character, Pepper, was introduced in the first episode as Journalist Lana Winters (Sarah Paulson) entered Briarcliff Mental Institution for the first time. Her introduction set the tone for the series and astonished fans as they learned that the micro-cephalic character was actually a talented actress and comedian in make-up. As the host of Shock Treatment: The American Horror Story Fan Podcast, HorrorNews.Net regular, Doc Rotten, was delighted to have the opportunity to interview this remarkable, beautiful and funny star of American Horror Story: Asylum.

Doc: You exploded onto the scene recently playing Pepper on American Horror Story: Asylum. It was a unique role to say the least and it was quite surprising I believe when people found out that Pepper was actually this beautiful young lady all made up. [It was] incredible! Tell us how the role of Pepper came about.

Naomi: Well, it was an audition, just like any other. You know, get a call from your agent. You’ve got to be somewhere at sometime. It was kind of a complicated audition. In Hollywood, there is sort of a hierarchy:  co-star, guest-star, series regular. Generally with a co-star, which would be the level I was at at the time, we’re generally limited to “Scapula, Doctor” and “Can I take your order?” — that type of role. They’re not going to entrust some big, meaty part to a relatively unknown actor. So this role was a little bit special, because… it is a big part, and yet it wasn’t. For a while. For the first eight episodes, I think I said 6 words…or something like that. 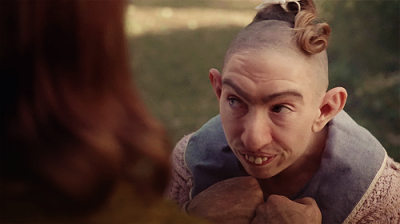 Doc: Well, you start off [the series] with the best words coming in when they introduced the asylum. “Play with me, play with me!” And that made the impression.

Naomi: That’s true. Thank you.  But see, even in the audition, they didn’t say, “Oh, you’re micro-cephalic, you’re this, you’re that…” They didn’t let on to any of that. They actually gave me a ball, and said, “We want you to improvise as if you were a child and try to get us to play with you.”  And in a sense, that’s Pepper, without giving it away. You’ve got to figure they are seeing a lot of actresses to do this. They don’t want them all running their mouths as to what Asylum is going to be about. Then, for the second part of the audition, I had to do an actual monologue of Jessica Lange’s — which is also not customary. But, now I know in retrospect, they really just wanted to see that we had range. That I could go from “Play with me” to the later, smart, evolved Pepper.

Doc: So, where were you in the years or months before this? What were you doing at that time?

Naomi: That’s the thing. A lot of people may think, “Oh, she just came out of nowhere.” Actually, I’ve been here all this time! But, it is true, this is definitely the highest profile thing I have done. Let’s see, the years leading up to this…I was doing my one woman show. I was climbing uphill both ways with a duffle full of dildos in Edinburgh, Scotland, doing a one-woman show every night. Which was awesome. It was great preparation, I’ve got to say. When I was climbing the stairs with one eye-ball, walking and talking with Jessica Lange, with massive, expensive cameras following us, there was no sense in getting nervous; I had just done way harder stuff. Not to say that playing Pepper didn’t have its own challenges. But carrying your very own show, every single night, in the middle of the night, in a foreign country, in the pouring rain…that’s hard work. 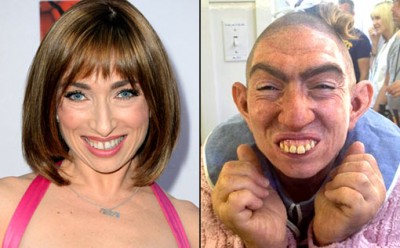 Doc: Probably one of the more challenging things with Pepper was the make-up.

Naomi: Not really. People say that, but all you do is sit there. I tend to be very expressive. So I felt like the make-up was a service to me – I could act through it. I didn’t seem big, even if my acting was; besides, the character is big. So, it was kind of a blessing for me.

Doc: You said that when you auditioned for the part, that they had you act like a child. Once you found out Pepper was going to be how she was, did you do any research? Or did you keep going with “the child” thing?

Naomi: I did a lot of research. I’d never heard of microcephalia, or this Schlitzie-person.  Early on, before I was even cast, they took photos of me, which they manipulated to see what I would look like in the role, which ultimately helped them to cast the part.  They showed me the photos, and said, “You’re going to look like this, so you’re probably going to want to sound and act like that.” And that’s when they told me about Schlitzie.  I basically rented “Freaks” for the summer, and just watched it on a loop. 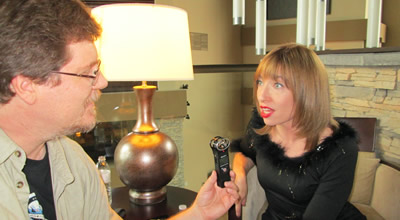 Doc: Were you intimidated by the role? Or excited?

Naomi: Excited. Excited. I mean, I suppose now in retrospect, I should have been more intimidated. There are real people with this condition and I wouldn’t want to look or sound like I was making fun. And, of course, it is a huge show with an all-star cast. But I didn’t know all that. I’d never even seen the show before I was cast.  So I think maybe ignorance is bliss. It seemed like a perfect fit for me, really. I’ve done a lot of comedy, a lot of big, big characters, so I thought, “Of course I’m going to get this, it’s perfect. This is what I do.”

The interview continues in full in a future episode of the Official HorrorNews.Net Podcast where Naomi goes further into the complexities and insanity that surrounded making American Horror Story: Asylum, including the outrageous Name Game episode. She also talks about her one woman show and hints at her future films and appearances. If you are a fan of American Horror Story, Pepper or Naomi Grossman, you do not want to miss the full interview.