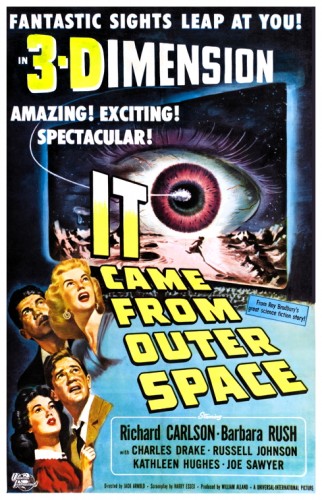 “John Putnam is a writer and an amateur stargazer with a new home out in the beautiful Arizona desert, which he enjoys with Ellen Fields, his girlfriend and a local schoolteacher. John is not trusted by the people of the small town near where he lives, certainly not by Sheriff Matt Warren, who feels protective of Ellen, and perhaps something more. One night, John and Ellen see a meteor crash in the desert. John drags his friend, Pete, out of bed to take him over to the crash site in his helicopter. Once there, John climbs down into the crater. Unfortunately, he does so alone, as Pete and Ellen wait for him. John is the only one who sees the spaceship before a landslide covers it. And John is the only one who catches a glimpse of the hideous thing inside. At first John’s story seems mad, until some of the townsfolk begin acting strange – as if they aren’t really who they seem to be.” (courtesy IMDB)

During the years 1951 to 1953, the Earth was busier than Grand Central Station, with dozens of extraterrestrials visiting us, invading us, or just passing through. The Thing From Another World (1951), The Day The Earth Stood Still (1951), Invaders From Mars (1953), The War Of The Worlds (1953) to name just a few. The alien invaders in It Came From Outer Space (1953) operated on a much smaller scale, nor were they really invaders in the strict sense of the word. Based on an original screen treatment by Ray Bradbury entitled The Meteor, the film concerned a group of aliens whose spherical spaceship crash-lands in an Arizona desert.

The story is simple. An astronomer sees what he takes to be a meteor land in the desert, but he finds that it’s actually a spacecraft. Nobody will believe him but, one-by-one, local townspeople are mysteriously changed – the aliens have removed people and are masquerading in their place until eventually his own girlfriend is taken over. To repair the vehicle they are forced to impersonate a number of people in a nearby town in order to obtain the necessary materials, and while they bear humanity no real malice, they are quite willing to destroy anyone who gets in their way. It is a haunting little film, sometimes weakly acted, sometimes implausibly melodramatic, but it has many memorable sequences and, perhaps most interestingly, the aliens are not hostile invaders, but simply frightened beings who want nothing more that to repair their craft and leave as soon as possible.

The main character remains one of the film’s major assets. Living at the edge of town, mocked by its inhabitants before the spaceship’s arrival, John Putnam (Richard Carlson) appears to be an outsider, and so he is quite logically chosen by the aliens to serve as a middleman. Whereas the town is said to be certain of its future, John’s childlike behaviour leaves him open to new possibilities. In each case, the visitors’ actions are revealing, they even turn the tame schoolteacher Ellen (Barbara Rush) into a kind of vamp. The aliens’ presence is made more palpable and frightening by an eerie musical score that uses a theremin, an electronic instrument that was already at this time associated with the genre.

With its eerie desert setting the film, directed by Jack Arnold, creates a vivid atmosphere and, in place of the barrage of special effects used in other films of the era, the nature of the aliens is suggested through visual ingenuity. Much of the action is seen from their viewpoint, the camera becoming the alien as it moves through the desert or closes in on some terrified human. The aliens themselves are briefly glimpsed at times, one of the most effective moments occurring when a man driving along a lonely desert road at night suddenly picks up in his headlights something moving into the middle of the road. We receive a quick shot of what appears to be a huge eye and little else, staring directly at us through the windshield.

According to Jack Arnold, who went on to direct a number of above-average science fiction/horror movies during the fifties for producer William Alland – Creature From The Black Lagoon (1954), Revenge Of The Creature (1955), Tarantula (1955), The Incredible Shrinking Man (1957), The Space Children (1958), Monster On The Campus (1958) and The Mouse That Roared (1959) – many of the visual gimmicks in It Came From Outer Space were put in to make use of the 3-D process: “The film started because Universal had bought a story from Ray Bradbury, and they thought it could be successfully adapted to make a 3-D picture. 3-D had just come out and Warner Brothers had released a picture called the House Of Wax (1953), which was hurriedly put together in order to throw objects at people in three dimensions.” 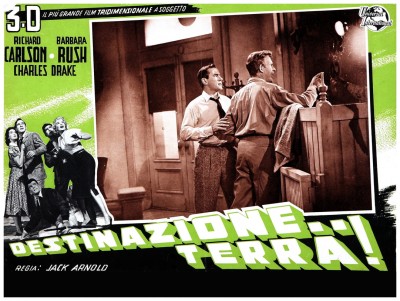 Even so, seen in merely two dimensions, it is still very effective and creates a genuine feeling of creepiness that lingers long after the film has ended. “I think the only way you can get an audience to accept the impossible is to get them involved in an atmosphere, a mood, a feeling of what you’re trying to do. That’s why I made a lot of use of actual physical locations – I make them work for my story. Most of It Came From Outer Space was shot out on the desert, only the interiors were shot in the studio, and also the scenes in the little town which was on the Universal backlot. Everything else was filmed out in the desert in an area about ten or fifteen miles to the north of Hollywood. The spaceship was, of course, a model. We built a full-scale section of it and a crew went out into the desert and dug a big crater for it. Then we matched shots of it with miniatures in the studio for scenes of the actual spaceship.” 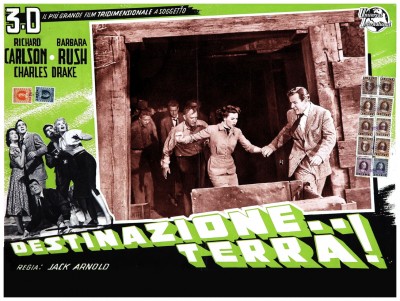 For many years it was believed that the Ray Bradbury treatment on which the film was based had been substantially changed by screenwriter Harry Essex, but research by Bill Warren published in his book Keep Watching The Skies! has shown that the final film adheres quite closely to the famous author’s own detailed script. It is a strongly atmospheric film, making good use of the desert setting to which Jack Arnold was to return again and again in later science fiction works. There is something otherworldly and mysterious about the American desert that renders believable almost any strange event that might occur there. The desert itself looks almost like a landscape from some other planet, and was often so used, as in Robinson Crusoe On Mars (1964), but that’s another story for another time. Right now I’ll politely invite you to return next week with a stout heart, an iron stomach and a titanium bladder for another head-melting romp through the garden of unearthly delights known as…Horror News! Toodles! 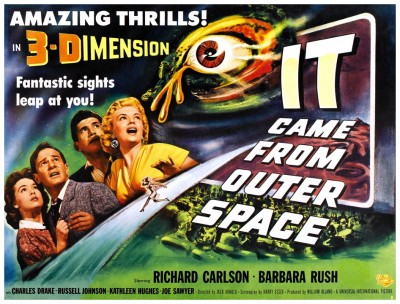