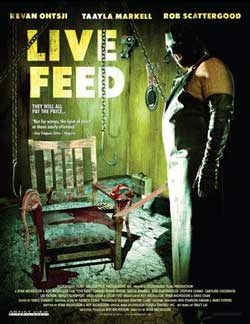 Holidaying in Japan, a group of ignorant youths decide to take a break from the constant drinking and partying to check out an underground P*rno theatre. When said cinema turns out to be a hangout and occasional hangout for a local gangsters’ mob, the youths find themselves in for the fight of their life. It’s all fun and games, until someone breaks out the S&M masks.

One of the slew of torture movies which followed 2005’s Hostel, Live Feed sticks to a very familiar template. Kids go to a foreign country, drink too much and act disrespectful towards the local. Then, after pissing the wrong locals off a little too much, the poor kids wind up bound and violently tortured in some grungy dungeon or other. In that respect, Live Feed doesn’t disappoint. 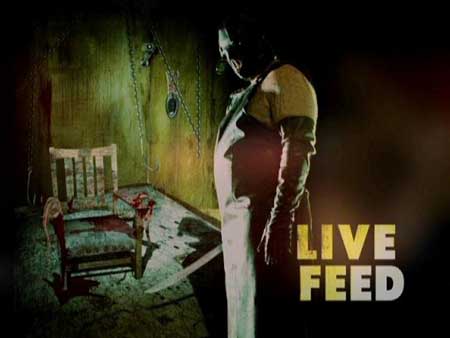 Ryan Nicholson’s horror debut has a lower budget than many of its peers (Hostel and Turistas for example) but makes up for that in sheer nastiness. It looks cheaper than most and possesses no real name talent, but it does have a massive psychopath wearing an S&M mask doing horrible things with a snake. There’s even a little bit of gangster politics and cannibalism thrown in there too. Whatever else it does or doesn’t do, Live Feed is memorable for these aspects alone. I’ve seen a lot of torture films before and since, but Live Feed’s snakeater scene (eat your heart out Metal Gear Solid) has somehow stuck with me. It’s not one to watch if you have a fear of snakes. 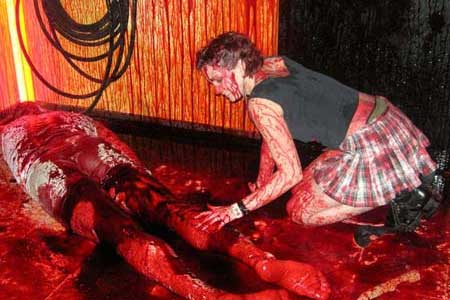 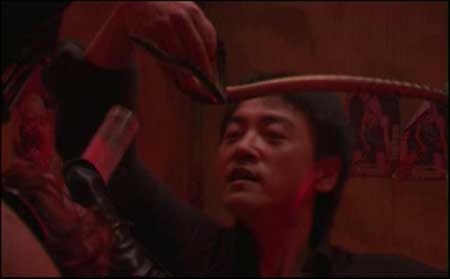 Rumour has it, for all of the ‘it’s a Hostel rip-off’ accusations, that father-and-son team Ryan and Roy Nicholson (now that’s what you call parent and child bonding) came up with the idea of Live Feed before Eli Roth and his Hostel. In this horror fan’s opinion, Live Feed is a much more effective movie than Hostel. While the latter is hampered by juvenile humour and Roth’s frat boy mentality, Live Feed is genuinely nasty, authentically exploitative and makes for much more uncomfortable viewing. It’s ugly, badly-written and unoriginal, but the lack of finesse only adds to the atmosphere. A ball gag or two wouldn’t have hurt though. This red tinged dungeon has to make do with a roll of duct tape, which is far less intimidating. Since the film feels inspired in part by the Gimp scene in Pulp Fiction anyway, a couple of ball gags would have been much more fitting. Still, the snake more than makes up for the lack of S&M gear elsewhere, as does our killer’s mask and rubber fetish. 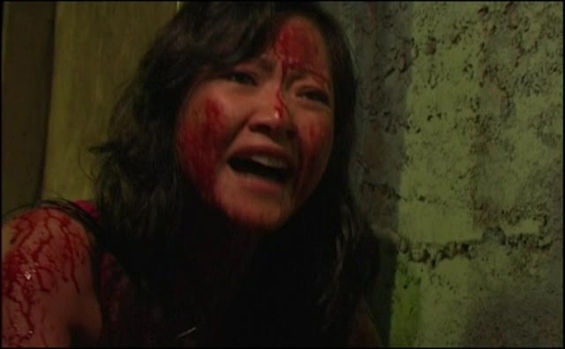 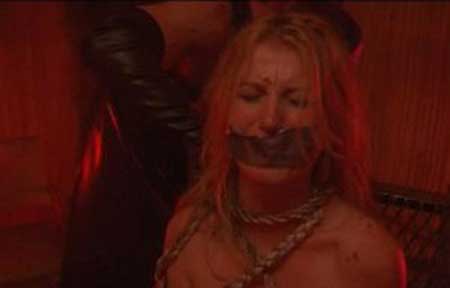 A variety of horrendously lit neon backdrops – from green to red and blue – add to the film’s uncomfortable, alien feel, as does the relentlessly electronic background music and Japanese setting. There may be a few too many stereotypes at play, but this is entirely in-keeping with the exploitation vibe the film has going for it. It’s never scary, but it does make for impressively unpleasant viewing. While Hostel always felt like a Hollywood flick imitating a Takashi Miike movie, Live Feed is a little closer to the real deal. It’s nowhere near as good as a Takashi Miike, but it’s still better than an Eli Roth. One would be intrigued to see what Nicholson and son can do with a real budget. They show no sign of selling out anytime soon though, with the garishly titled Three on a Meathook entering pre-production now. 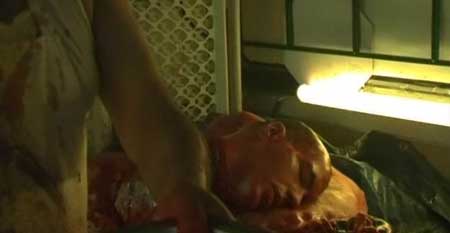 Horror fans who like a little more story from their extreme exploitation would be better off looking elsewhere. Likewise, those who like their gore to be believable and realistic will be put off by some of the dodgier special effects and cheap cinematography. Live Feed is not a great film, nor is it even a particularly good one. It is effective though, in its own cheap and nasty sort of way. At the very least, it’ll probably put you off take-away food for a while.