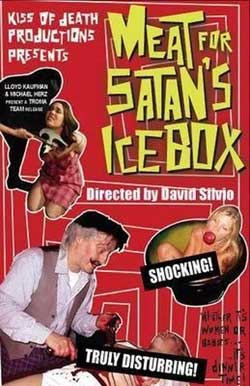 The obscure town of Satan Place harbors a dark and savage secret.  What becomes of runaways and mislead teenagers who have no direction in life?  When they have nowhere else to go, they find their way to Satan’s Slaughter House!   Pretty Cindy Cavateli’s life is in shambles after she witnesses her mother’s death at the hands of savage slaughterhouse fiends.  Cindy and another youth, Christian, try to flee the terrible town, but find themselves, like Hansel and Gretel, in the bowels of the slaughterhouse, where they experience sadistic torture and sexual perversions while they are helplessly held captive in the clutches of the cannibalistic workers.  The slaughterhouse of Satan Place is where those who can afford it comes to eat the flesh of the young, like a deli from Hell!

Faithful HorrorNews readers, let’s break down the fourth wall and conversate for a moment, shall we? If you’ve read any of my other reviews, you know that I always look for, and find, the positives in every movie I review (and if you haven’t, what’s going on? I’ve been here for months now). Even when I’m faced with a horrible movie that stands against everything that I hold close to my heart, I still look for the faintest glow of light in an otherwise dark and dreary disaster. So when I was assigned to review David Silvio’s Meat For Satan’s Icebox, I also saw that it appears on DVD as part of a two-pack special through Troma alongside Wiseguys Vs. Zombies. I was overwhelmed with a toxic glow, for Troma has never done me wrong. Sure, alongside classics like The Toxic Avenger and Terror Firmer there are some duds like Buttcrack, but even that featured Mojo Nixon and still made me laugh. So it is with great disappointment that I tell you now about the worst film Troma has yet released: Meat For Satan’s Icebox. 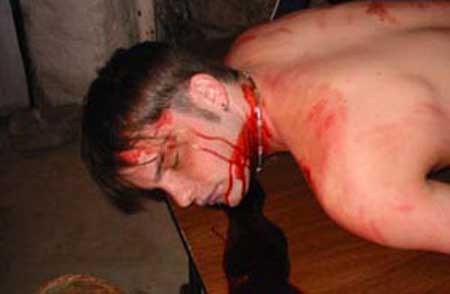 The general storyline goes something like this: in the town of Satan Place, the locals are cannibals and eat strangers and “bad” girls. What makes a girl a “bad” girl, you ask? Apparently the sole fact that she is female qualifies her. The old slaughterhouse is being run by Cassandra and Jack (coincidently played by the writers of the movie, David & Diana Silvio), who have a horde of thugs that enjoy chasing women into the woods and dragging them back in preparation for their sale to the local citizenry as meat. Cindy (played by Crystal Aura) is a troubled school girl whose mother was killed by the meat-sellers, and since then has turned to drugs and sleeping with her father. Christian (played by Dennis Kusluch II) is the new unpopular kid in town who lives with his abusive father and has a crush on Cindy. When Cindy kills the headmaster nun at her school and Christian is beaten and kicked out of his house by his father, the two try to run away together into the woods but are quickly captured and brought to the slaughterhouse where they are tortured, then escape, then are re-captured, only to be tortured again.

This movie tries very hard to be trashy and disgusting. Cindy’s father insists that they have a sexual relationship because he misses her mother. Christian’s father hires prostitutes and spanks them in front of his son while he calls him homophobic slurs. A decapitated head is used as an oral sex aid. A girl is tied down and branded while she vomits into a bowl. When Mr. Troma himself, Lloyd Kaufman, appears in a brief cameo as a gynecologist interested in buying some of the women from the slaughterhouse, he has each of them pee into a cup and then drinks it. There is even necrophilia and the obligatory pulling out and eating of the intestines. None of this makes Meat For Satan’s Icebox any better.

This movie is just not good. It is shot on video, which in and of itself isn’t a bad thing, but there are scenes that are too dark to see as well as numerous heads cut off by the top of the screen. Across the board, the acting is worse than a middle school class play, but then again the dialogue is so bad that even good acting wouldn’t have saved it. The effects are poorly done. I don’t think there is a single female character in this movie that isn’t, at one point or another, called a “f*#king whore.” This is just a sign of poor writing at best. Hell, give me a single good gore scene or one shocking moment and I’ll excuse all of this. But, alas, Meat For Satan’s Icebox provides nothing but fodder for Seanofthedead’s laughtrack. Instead, in a sequence that left me scratching my head, the movie seems to end, then suddenly backtracks and has a completely different ending to it. It already felt like this movie went on forever, but to tack on a whole other, Hostel II-like, longer ending just felt like torture. 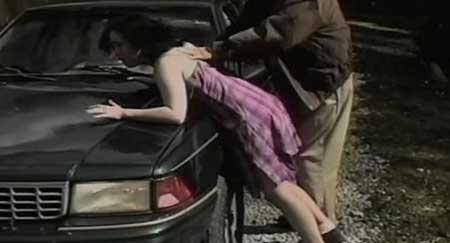 It doesn’t feel right to completely trash a movie, knowing that the cast and crew really did try, knowing that someone did sit down and write what they thought seemed like a good enough story to recreate on film. So I’ll offer this. After the credits, there is a brief couple minutes of fun with Lloyd Kaufman and Debbie Rochon (who is not in this movie at all, by the way) goofing around and providing a fake-voiceover synopsis of the two movies featured on the disc. I don’t know that it’s worth the one hundred plus minutes it takes to get there, but it is funny enough that I watched it twice. 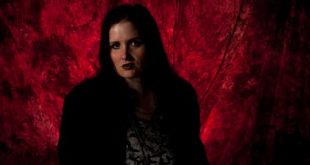