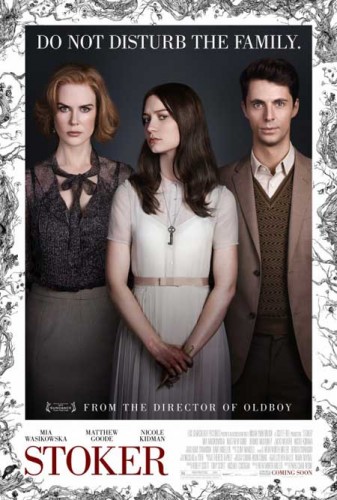 After the death of her father, a privileged and disturbed teen meets her Uncle Charlie who changes the direction of her life forever as she slowly unravels her family’s dark, hidden mysteries.

Stoker is a captivating and disturbing family portrait of horror and understated violence. Director Chan-wook Park (Oldboy, Sympathy for Mr. Vengeance, Thirst), along with cinematographer Chung-hoon Chung, makes his State-side film debut with Stoker providing a mesmerizing but drawn out view into the maturing of a young woman with murderous tendencies. It’s a delicious character piece where the evolution of the character’s fabric and being takes precedence over the visceral violence and bloodshed. It’s all about mood and motivation with each kill and violent act pulled back, but never hidden. Mia Wasikowska (Alice in Wonderland) is the focus of the film as India Stoker as she struggles to deal with the loss of her father and her place in the family, and in life and death. Her delivery of the role is extraordinary, as is her co-star’s, Matthew Goode (Watchmen) as Uncle Charlie. Goode provides a creepy, hypnotic, foreboding performance that gets under the skin and oozes menace and peril. Nicole Kidman (The Others) rounds out the main family unit as India’s distant, spoiled mother essaying another fragile, deranged role. Stoker is an achievement in style, character and direction but is slowly paced with little action and a predictable plot. 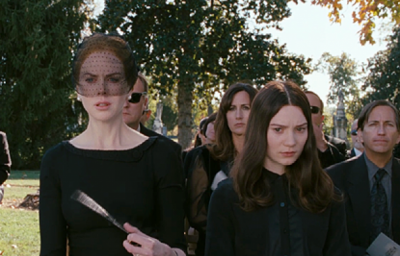 The story for Stoker begins and ends with its lead, India Stoker (Mia Wasikowska); she is the core focus of the film. A young, troubled teen, India struggles with the death of her father and, worse, being left behind to live with her unfeeling, distant mother, Evelyn Stoker (Nicole Kidman). But a new challenge awakens her life when Uncle Charlie arrives for the funeral, her father’s brother who neither she nor her mother knew about. A kind and charismatic man, Charlie Stoker (Matthew Goode) is invited to stay at the sprawling Stoker Mansion. While Evelyn begins to fall under Charlie’s spell, India begins to see past the mysterious Uncle’s facade seeing him for what he really is. As a result, she begins to fall for him as well. The film slowly peels back each layer of both India and Charlie’s psyche, exposing their hidden impulses, dangerous desires and dark tendencies. Despite the motivations for many characters being predictable (but no less horrifying) and the action uneventful (but no less haunting), the manipulation of character is the film’s art. What makes India tick? What is she thinking? What will she do? India’s every move, every thought, boils the tension in the film like a finger slowly, ever so slowly, pulling back on the trigger of a gun. 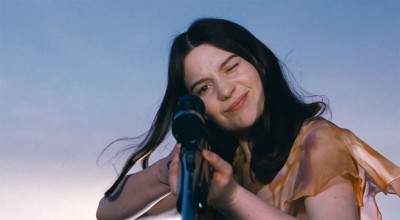 Mia Wasikowska as India, a role far removed from her turn as Alice in Tim Burton’s Alice in Wonderland, is extraordinary and bewitching. It’s a quiet yet intense role where her intentions scream while her voice is rarely ever raised. She is marvelous as India, both the antagonist and protagonist all rolled into one. It is a performance of subtle maturity and restraint. She gives India a mouse-y outward quality with an inner lion ready to pounce on its prey. When the mouse is in control, she is very much the victim of her life, of her surroundings, of her own emotions; however, when the lion roars, she is dangerous and deadly. Mia gives the character a depth and an unbalanced compass hidden just behind a quiet voice and expressionless face that cracks just enough to let the demon inside show through. Memorable and powerful, she is the film’s strength and muse. 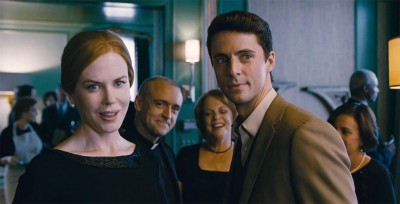 Matthew Goode is equally haunting and chilling as Uncle Charlie. Similarly quiet as Wasikowska’s India but far more imposing and shadowed. Uncle Charlie is not fully in tune with his surroundings as first evident by not wearing black at his brother’s high-profile and prestigious wake and later by his posture, expression and tone. He every glance appears to be looking for a big enough excuse to explode, to tear apart the world, and people, around him. Where India is a caged lion, Uncle Charlie is a ticking time bomb. Tick. Tick. Tick. Goode is unforgettable in Stoker, even more effective here as he was as Ozymandias in Zack Snyder’s Watchmen. 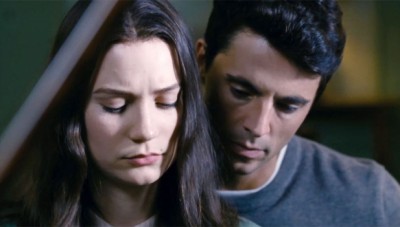 Chan-wook Park is an accomplished Korean director with modern classics in his library, Oldboy, Sympathy for Mr. Vengeance and Thirst. Stoker makes his first US Hollywood feature from a script by Wentworth Miller (Prison Break). He is a master of style and storytelling and Stoker is no exception. His camera movement is brilliant; his camera is nearly a character in the film in itself as it moves in and out of the frame and composition, toying effortlessly with perception, meaning and intensity. In a scene where India and Charlie connect while both play piano side-by-side is a swirling masterful shot, the camera circles the characters, their expressions, their movements, bouncing back and forth between what the characters are doing, to where they are doing it, to what they are thinking – all without a single line of dialog. It’s a visual treat. Other shots, such as India’s shower scene are told with mixed sequencing playing with time, revealing a totally different perspective to the emotion of the moment, providing the film with added impact and shock. His entire approach to the film is understated and purposeful in intent. Stoker is an exceptional example of Park’s talent and expertise. 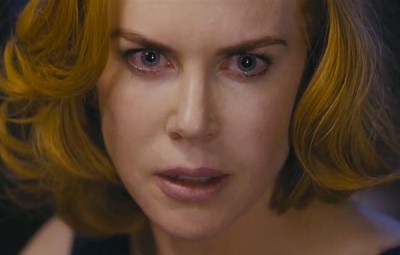 Brilliantly acted, masterfully directed, beautifully filmed, Stoker is a rare exercise in modern cinema; it’s a haunting character study that challenges and disturbs its audience. Where today’s films must flail action at the screen in accelerated, hyper-stylized manner, Stoker is conversely precise and carefully paced. It is an unraveling of the birth of character, a maturing of its lead and a reveal of the motivations of its antagonist and its protagonist. Multi-layered and full of depth, the film is only compromised by its predictability in the story itself: the reveals are foreshadowed, the motivations are telegraphed; and the outcome is deadly certain. However, getting there, witnessing the transformation is extraordinary and well worth the slow, intentional pace and lack of action. Chan-wook Park demands the audience’s attention and, with his stunning camera work, insists on their participation. A rare treat and a highly recommended film.