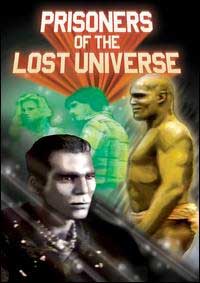 SYNOPSIS:
“Through a series of coincidences, Carrie, Dan and Doctor Hartmann all fall through a teleporter device Hartmann has invented. Transported to a what appears to be a prehistoric world in a parallel universe and unable to find the Doctor, Dan and Carrie must figure out a way to get back home. Before they can do that, however, they must deal with tribes of savage cavemen, as well as brutal warlord named Kleel who has taken a liking to Carrie and seems to be unusually well-supplied with Earth technology.” (courtesy IMDB)

REVIEW:
This week I have less of a film, and more of a debacle, really. The obscurity known as Prisoners Of The Lost Universe (1983), a film so good it was released directly to bargain basement bin Beta. Now remember, when you’re watching the opening credits, that ‘introducing’ means they’ve slept with the producer. Now, what can I say about this film and still remain uncensored? Hmmm, that’s tempting. Anyway, you may be thinking this is Sid and Marty Krofft’s aborted low-budget pilot for the Playboy channel, and you’d be wrong – a smart-arse, but wrong. It’s from the same people who brought you Hawk The Slayer (1980), and they should take it back immediately. The director and co-writer is Terry Marcel (never trust a man with two first names) and the co-writer, producer and composer is Harry Robertson. 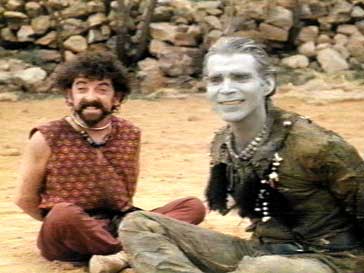 First to Mister Marcel. Apart from Hawk The Slayer, which we’ll unfortunately be returning to, he was also responsible for There Goes The Bride (1980), apparently the first film about pre-marital spontaneous combustion, and Jane And The Lost City (1987), so he has a penchant for losing geographical features. To misquote my old friend Oscar Wilde “To lose one universe may be regarded as misfortune, to lose another looks like carelessness.” And how did he develop the raw skill and talent to create these cinematic tumors? He was the assistant director on the last Peter Sellers Pink Panther movie (1978) and all the knock-offs that followed. He was the one that convinced Blake Edwards that the Pink Panther diamond was actually the star of the series. 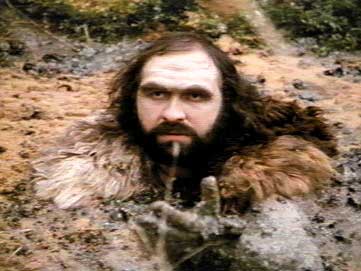 Harry Robertson, his partner in crime, was predominantly a composer, which is the only sign of quality in this film – well that, and the cartoonish sound effects. Robertson composed scores for such Hammer films as Twins Of Evil (1971), Lust For A Vampire (1971) and The Great Pony Raid (1968), and he worked under the obscure pseudonym that no-one would guess in a million years – Harry Robinson. But enough about them, let’s introduce the stars of the film – Richard Hatch, Kay Lenz and John Saxon. 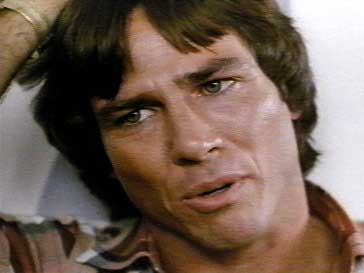 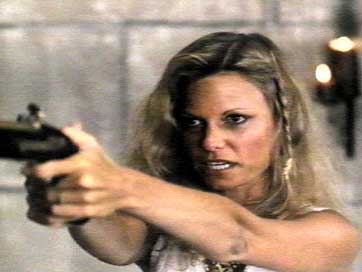 Kay Lenz is better known for her stirringly patriotic performance as American Maid in the cartoon version of The Tick, but she’ll go down in history for being voted Tiger Beat’s Luckiest Woman In The Universe when she married David Cassidy – briefly. They broke-up when she found that cherish was not the word he used to describe all the feelings he felt for her inside. 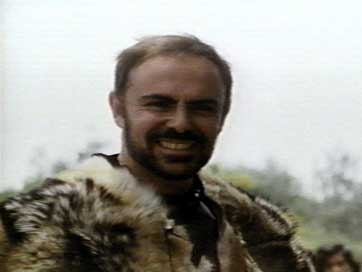 So let’s move on to John Saxon, middle name Anglo. Saxon has been a mainstay of genre cinema since Enter The Dragon (1973), Cannibal Apocalypse (1980), Hands Of Steel (1986), Battle Beyond The Stars (1980), and of course the classic miniseries Great Heroes Of The Bible. He is less fondly remembered for the notorious episode of The Mary Tyler Moore Show, when he is framed for the torture killing of Phyllis by Ted Baxter. Saxon was in great demand for post-apocalyptic films, because when he’s not working in the film industry, he actually lives as a warlord in his private fortress with his company of leather-clad minions. In L.A. that’s just considered a lifestyle choice. So Terry Marcel signed up John Saxon knowing all the costuming, the fortress, the minions and the torture instruments would all be provided free. Almost free. Saxon usually required a small stipend in the form of a comely wench or gunpowder, but you’ll see how that works out.

The rest of the cast is made up of people who hadn’t worked since Hawk The Slayer, so you’d think they would know better. So, there you have it, all the ingredients of Prisoners Of The Lost Universe, a labour of love, but the sick, crazy, stalker kind. So just be sure to miss next week’s Horror News when I discuss that classic of children’s cinema, Santa Claus Conquers The Martians (1964). Until then, toodles!

Prisoners Of The Lost Universe (1983) 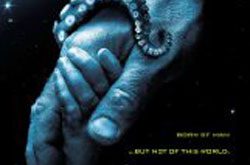