Home | Scream Factory Releases The Goods On THE HOWLING

Scream Factory Releases The Goods On THE HOWLING

No one can argue the fact that THE HOWLING is a true classic. Another one of those films that many horror fans cite as a major reason for being a fan.

Sure, the sequels were less then stellar but the original with those amazing FX by Rob Bottin, the stuff of legend and thanks to SCREAM FACTORY we are going to get to see it all in stunning high def and with a truck load of special features. The press release that arrived tonight explains it all:

From the director of Gremlins and Piranha comes the ultimate masterpiece of primal terror. Filled with edge-of-your-seat suspense, “genuine thrills [and] amazing special effects” (Us), this riveting werewolf tale sinks its teeth into your deepest fears and never lets go.

Severely shaken after a near-fatal encounter with a serial killer, TV newscaster Karen White (Dee Wallace, E.T.) takes some much-needed time off. Hoping to conquer her inner demons, she heads for “the Colony,” a secluded retreat where her new neighbors are just a tad too eager to make her feel at home. Also, there seems to be a bizarre link between her would-be attacker and this supposedly safe haven. And when, after nights of being tormented by savage shrieks and unearthly cries, Karen ventures into the forest to find answers, she makes a terrifying discovery. Now she must fight not only for her life… but for her very soul!

June 18th is the release date on this one. Circle the date on your calendar, you’re going to want to have this one in your collection. 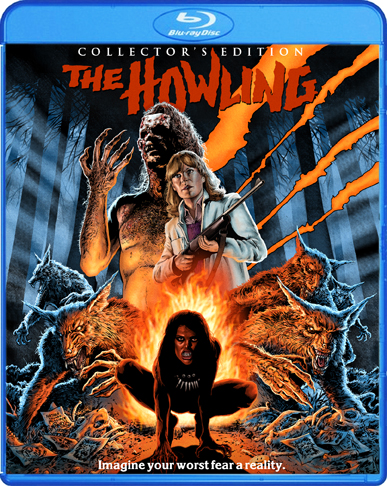