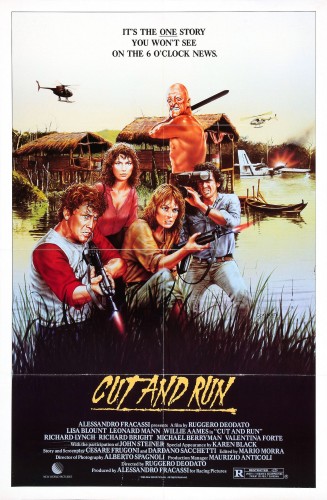 A reporter and her cameraman connect a surviving Jonestown leader and a TV exec’s missing son to a drug war where jungle installations are being massacred by an army of natives and a skilled white assassin. 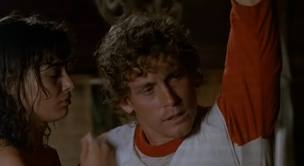 Then, following this very special opening, it settles down and becomes something completely different – a gory cross between Indiana Jones, Cannibal Holocaust and Apocalypse Now. Despite being a part of Deodato’s Amazonia trilogy (along with Cannibal Holocaust and Jungle Holocaust) cannibalism doesn’t figure into it at all. Cut and Run is actually more of an action adventure movie with a higher level of gore and violence than most. It’s blessed with a great pair of villains in Berryman and Richard Lynch, playing the mad Colonel Horne. 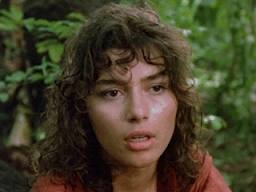 Horror legend Berryman is a lot of fun as Quecho. The big man was excellent in Wes Craven’s Hills Have Eyes, but ultimately wasted. Lest we forget that he was actually killed off by the family dog in that movie (the insulting sequel not withstanding, in which he was resurrected – only for the dog to murder him all over again, pushing him over a cliff) and never really got the chance to do much besides look scary and attack an RV. In Cut and Run, he does a great job of terrorising the poor lost Americans. He could do more (his screentime is still relatively short) but Lynch picks up the slack with his Colonel Kurtz style war criminal. It’s more his movie than it is Berryman’s or the locals’, with the former being more of a hired goon as opposed to lead villain. The locals barely figure into the film, having little else to do but either capture/kill faceless victims or get killed themselves. 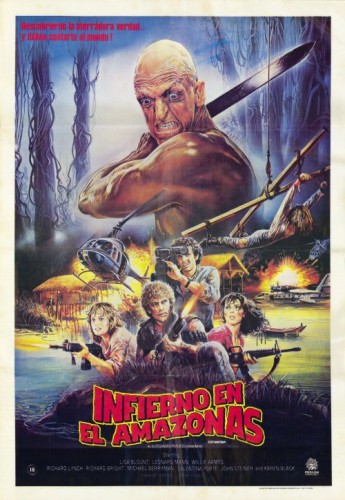 The Wes Craven connection is furthered in that the great man had originally been scheduled to direct, only to drop out at the last minute. Good as Craven’s eighties work is, we can’t help but think it for the best. No-one does jungle nastiness quite like Ruggero Deodato. His typically lovely cinematography is accompanied by an adorably jaunty soundtrack. None of it approaches the horrible greatness of Cannibal Holocaust, but it’s a lot of fun all the same. It’s certainly more watchable than his cannibal masterpiece. Iconic and infamous as it may be, Cannibal Holocaust is hardly feel-good cinema. Nor is Cut and Run, but it does feel like an adventure movie, complete with the fast pace, exciting plot and memorable villains. One can almost picture Indiana Jones duking it out with Berryman in the swamp as the crocodiles look on, perplexed. 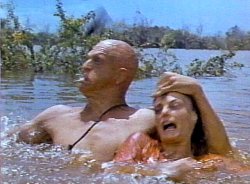 And quite right they should be perplexed, too. The story is a confused mess of different elements, from urban crime thriller (there’s a whole subplot set in the big city) to boring father/son relationship drama. The villains may be brilliant, but our heroes are nothing special. Lisa Brount has little to work with as Fran, and cameraman Mark is a dullard. The missing son in question is a whiny pain, wearing an obnoxious Mickey Mouse t-shirt and a face that looks a little like young Mark Hamill. Inevitably, parts of the film haven’t aged as well as others, leaving sequences such as the beach scene looking faintly ridiculous. If you thought Darth Vader’s much maligned “NOOOOO” at the end of Revenge of the Sith was bad, wait until you see an army of almost-naked men on a beach do the same thing, all at once. Meanwhile, a closing shock at the end is predictable and silly, coming exactly when and where you expect it to. Both villains are ultimately wasted, although we do get a nice beheading scene out of one of them. 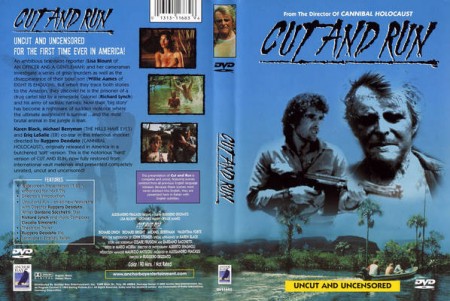 Cut and Run currently rests in unfair obscurity. It’s a shame that this is one of Deodato’s lesser known films, since it exhibits a genuine vibrancy that’s hard to dislike. Add to that a great pair of performances from Berryman and Lynch, and you have an underrated gem that deserves to be seen by any self-respecting fan of eighties exploitation cinema.