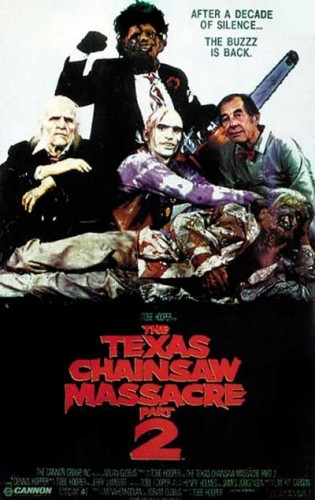 TEXAS CHAINSAW MASSACRE 2
1986 / Dir. Tobe Hooper / 35mm
The first of what would eventually become a string of sequels, remakes, and reboots of remakes, TEXAS CHAINSAW MASSACRE 2 is by far the most entertaining follow-up to the 1974 horror classic. Original director Tobe Hooper guides a satirical screenplay by art-house favorite L.M. Kit Carson (“Breathless,” “Paris, Texas) that sees Leatherface and his cannibalistic clan terrorizing a female disc jockey while a Texas lawman (Dennis Hopper, fresh off of “Blue Velvet”) seeks vengeance for the death of his kin. Funny, gory, and completely over-the-top, TEXAS CHAINSAW MASSACRE 2 stands out as one of the most memorable horror films of the 1980s.
This special screening is hosted by horror icon Bill Moseley, who burst onto the scene in this film as the psychotic (and hysterical) cannibal hippie Chop Top, managing to out-crazy Dennis Hopper! Mr. Moseley is perhaps best known to younger horror aficionados as the character Otis from Rob Zombie’s films HOUSE OF 1000 CORPSES and THE DEVIL’S REJECTS. Bill Moseley will be on hand to introduce TEXAS CHAINSAW MASSACRE 2, as well as do a Q & A with audience members following the film. Don’t miss this extremely rare opportunity to see TCM 2 in 35mm-with Chop Top himself in the theater!