Demona is indeed a Darkotic Romantic Gypsy with class. Seduced by MoonLight, she is from the nation of Brazil. With Italian and German ancestry. A Belly Dancer attracted to the unknown and mysterious things with many different interests in life. Demona is not only an actress and model but she’s also a studio musician which has been doing all professionally for a very long time now with different artists from around the globe. Her vocals has been described as from angelic to psychotic doomed, hypnotic, powerful, strange & unique… You describe it !

Her music projects ranges from Alternative Rock to Experimental, Gothic, industrial, Dark, Vamp, Trip-Hop, Doom among others. Writing her own lyrics
and having layed vocals on several projects such as … Sitra Achra, Synthetic Darkness, The DownWard Path, Pactum, WET, Lamenta Lamia, One Rooh etc… In which some countries are already covering her songs.

Demona comes out naturally as an actress, being fetured in various music video and films such as “The Prison of the Psychotic Damned”,”Synthetic Darkness” music videos, Descent Into Darkness 2 movie in which is still in production, Brazilian TV show with the WET appearence, etc… Most of it can be found online today.

The “Synthetic Darkness” song is included on the “Prison of the Psychotic Damned” movie soundtrack and on it’s end credits and more… A music video was created specially for the movie and it was produced, directed, edited, special fx, green screen keying, lighting, and videography by Troy Dovey. – Demona Bast / Cruxstar Productions. Troy Dovey.

The Prison of The Psychotic Damned was the first feature film produced by Red Scream Films LLC. The film concerns a group of five ghost hunters who are given permission to spend the night in the old Buffalo Central Terminal, a building haunted by the spirits of the psychotic damned. The film stars Demona Bast, Melantha Blackthorne, and Susan Andriensen (The Blood Shed). Things are all fun and games until the sun goes down at which point the blood hits the fan, the group become separated, and the screen is painted with non-stop gore. Released by York Entertainment in July 2007 the film is available at NetFlix, Amazon and a number of other on and offline dvd sellers/renters. With all set and done, Demona Bast have been gained recognition and a lot of fan around the world. 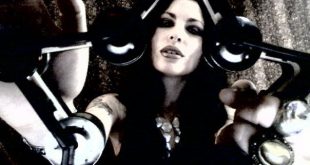