Land of Shadow and Substance: Mr. Denton On Doomsday

Written by Serling, this tale originated from an idea surrounding the old west and in particular, gunfighters. However, the title appeared somewhat to be little more than average sales slogan similar to, “as seen on TV.” You Too Can Be Fast With A Gun, began as a story surrounding a schoolteacher having delusions of gunfighting grandeur, able to finally make them come true with the aid of an elixir or potion. Upon rewriting, Serling changed the title and opted to tell the tale from a more believable viewpoint, using actual Wild West characters in a setting that was more than suitable. While the concept of a downtrodden person magically getting a second chance had been explored before by many a writer, Serling’s take created a powerful episode, certain to generate viewers’ emotions ranging from empathy to encouragement. 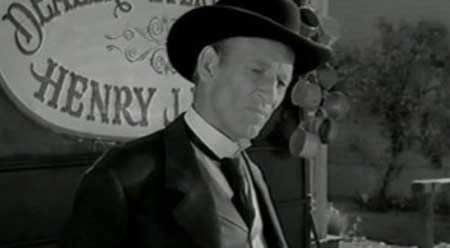 Al Denton (Dan Duryea), a washed-up, has been shell of a one-time feared gunfighter, now wracked with regret and little hope, drowns his sorrows in bottle after bottle. The years, along with his revered reputation, has substantially faded and he is now looked upon as the town drunk, the subject of constant, cruel ridicule by Hotaling (Martin Landau), a rather sadistic tormentor.

Henry J. Fate (Malcolm Atterbury), is a peddler, having just pulled his wagon into town. He, along with most other town folk, observe Hotaling’s courtyard mockery, forcing Denton to sing a rendition of How Dry I Am in order to obtain his next drink. A trembling Denton stoops low and performs. Afterward, as if adding salt to a wound, Hotaling slams the reward, a full whiskey bottle, against a roof bracing beam, shattering the top off before laughingly tossing it into the middle of the thoroughfare. Denton clambers after the bottle and gulps down what remains of the contents, afterward, collapsing contently on the dry dirt. Fate glances at the fallen man, and a six-shooter magically appears alongside him. Upon arising, Denton sees the gun and picks it up. 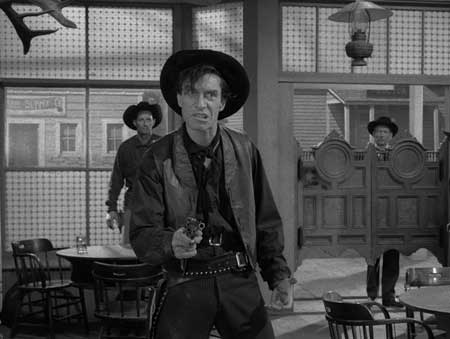 Hotaling, his posse in tow, emerges from the saloon just as Denton stands and wants another rendition of the “dry” song. Denton complies, thus earning yet another drink. Stumbling toward the swinging doors, Hotaling spies the gun he carries and immediately challenges him to a showdown. Aware of Denton’s loss of skill, he offers to draw with his left hand in order to give him a chance. Meanwhile, still near his wagon, Fate observes as Denton, unknowingly swaying and pointing the pistol, turns and pleads with theonlookers, hoping for assistance in staving off the threat. The gun goes off, shooting Hotaling in the hand and disarming him.

Suddenly, Denton has regained the town’s respect and is cordially invited into the saloon. However, Hotaling isn’t finished just yet and infuriated, enters, bent on having the showdown. Once again, with Fate watching from the sidelines, Denton pleads before the gun goes off, this time in a miraculous shot that severs the chain of a hanging chandelier. The chandelier falls on Hotaling, defusing the situation. Amazed, the townsfolk offer to buy Denton a drink. With restored dignity, he refuses, swearing off the bottle for good.

Although his dignity returned, his confidence at gunfighting has not. Quite aware that the vicious circle having drove him to drink in the first place is certain to now return, he consoles, accepting that the near future probably holds death when the inevitable gunslingers once again pursue. 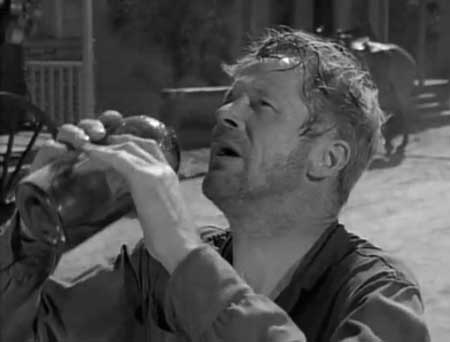 Upon a meeting with Fate, the peddler offers Denton a potion that can guarantee a full ten seconds of speed, making him faster than the fastest draw. Skeptical, a sample is offered and indeed, does make Denton a deadeye shot, without even aiming. Armed with another bottle of the potion, Denton prepares for the arrived hotshot, a young man by the name of Pete Grant (Doug McClure). 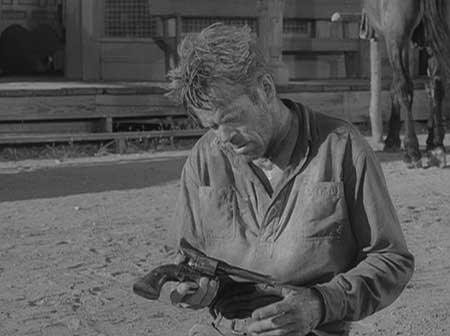 As the two square off inside the saloon, Denton drinks the potion and notices that Grant is doing the same. Each draw and fire, but only succeed in wounding one another’s shooting hands. The injuries, while not life threatening, will guarantee that neither man will be able to ever draw again. Denton approaches Grant and mentions that they are both have been blessed; for the circle is finally broken, with an older man gaining a second chance at life and a younger one never having to experience the unintentional horrors of constant showdowns.

Land of Shadow and Substance: Mr. Denton On Doomsday