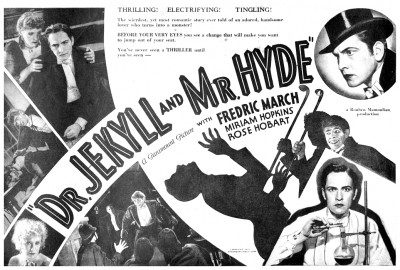 “Henry Jekyll is a well respected member of London society. In his personal life, he is pre-engaged to Muriel Carew, the daughter of a brigadier general. In his professional life, he is a medical doctor, scientist and academician. He theorizes that in each man is a good side and an evil side which can be separated into two. In doing so, the evil side can be controlled and the good side can live without worry, in combination leading to the betterment of society. In his experiments, he uses himself as the subject to test his hypothesis. His evil side, whom he coins Mr. Hyde, escapes into London, and terrorizes party-girl Ivy Pearson. Jekyll, aware of Hyde’s goings-on, decides to stop his experiments because of the suffering he has caused Ivy. What Jekyll is unaware of is how ingrained Hyde is in Jekyll’s life.” (courtesy IMDB)

By the thirties, Hollywood had become terribly enthusiastic about horror films, and the boom had begun. The years 1930 to 1936 were a good time for the Hollywood Gothic. In addition to the Universal Studio films Dracula (1931), Frankenstein (1931), The Mummy (1932) and The Invisible Man (1933), there was also The Island Of Lost Souls (1932), Doctor X (1932), Mad Love (1935), The Werewolf Of London (1935) and The Devil Doll (1936), amongst others. One of the most popular films of the period was Rouben Mamoulian‘s remake of Dr. Jekyll And Mr. Hyde (1931), usually considered the best version of this rather religion-heavy story of guilt, sin, punishment and the emergence of the beast within. 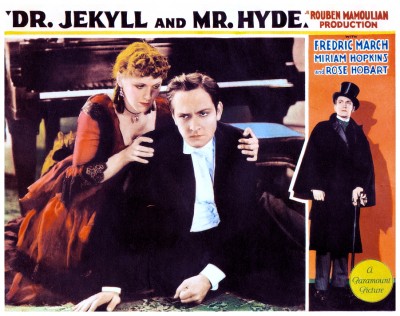 Inspired by the success of the Universal films, Dr. Jekyll And Mr. Hyde was a rare venture into the horror genre for Paramount Studios. The result is one of the classiest entries in the genre, a truly A-grade production, and Fredric March won an Oscar for his forceful performance as the kindly Dr. Jekyll and the monstrous figure he becomes when undertaking soul-seeking experiments with a dangerous drug solution. His Hyde is pure evil, making life a living hell for the helpless trollop Ivy (Miriam Hopkins) who falls into Hyde’s clutches, and trying to destroy all that is precious to Jekyll, whom he despises. 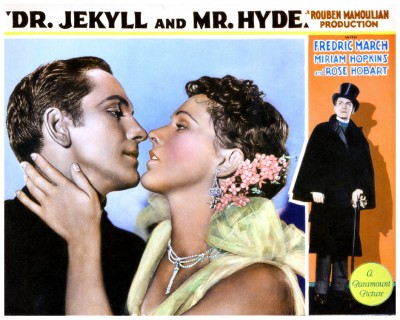 One of the cinema’s most terrifying monsters, a sadistic woman-beater of the first order, Hyde resembles a demented neanderthal, with large protruding teeth, enormous lips, hungry eyes and dark hairy features. He also mimics an ape with his amazing athletic maneuvers. This was the first sound version of Robert Louis Stevenson‘s novella The Strange Case Of Dr. Jekyll And Mr. Hyde (1886) which, incidentally, bears little resemblance to any of its adaptations. There were various theatrical adaptations from 1888 followed by seven silent movie versions made between 1908 and 1921, the last and most famous of these starring John Barrymore. Later films include Dr. Jekyll And Mr. Hyde (1941) with Spencer Tracy, Abbott And Costello Meet Dr. Jekyll And Mr. Hyde (1953) with Boris Karloff, The Two Faces Of Dr. Jekyll (1960) with Paul Massie. the tran-sexual variant Dr. Jekyll And Sister Hyde (1970) with Ralph Bates, and many more. 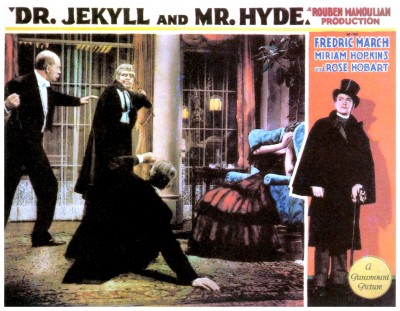 A 1981 British television movie of Stevenson’s story had David Hemmings as the good doctor, and 1990 gave us the American Jekyll, a four-hour two-part made-for-television film starring Michael Caine in the title roles. John Malkovich starred in the film adaptation of the novel Mary Reilly (1996) in which the story is retold by Jekyll’s maid. More recently The League Of Extraordinary Gentlemen (2003) featured Jason Flemyng as both Jekyll and Hyde, and in Van Helsing (2004) Robbie Coltrane provides the voice of a computer-generated Hyde, who Van Helsing unintentionally kills when pursuing him through Paris. Speaking of special effects, Mamoulian’s film is notable for the transformation sequences, achieved by using makeup that became slowly visible to the camera as infra-red light was directed onto the actor’s face, a technique that was developed by cameraman Karl Struss. The studio refused to reveal how the trick was performed for many years. 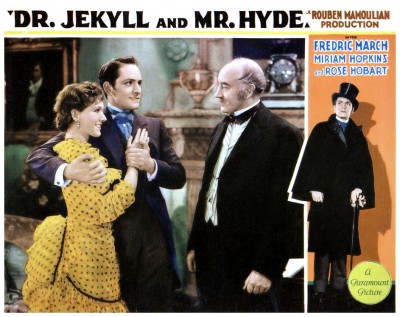 The movie has a strong sexual content and it may be a little too gruesome for younger children or the squeamish. In fact it was edited rather heavily for its re-release in the forties. It is known for innovative influential direction by Mamoulian, who experimented with split frames, superimposed shots and point-of-view sequences, most notably during Hyde’s first scene, when passerby react to his hideous countenance before we get the chance – Jerry Lewis did a great job sending up this scene in his classic original comedy The Nutty Professor (1963). 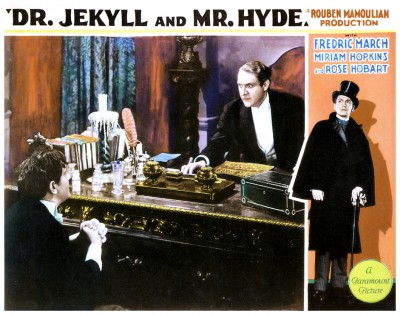 Mr. Hyde, the brutally lustful alter ego of primly repressed Dr. Jekyll, can be regarded as part of the Werewolf tradition of horror cinema. Although he doesn’t literally become a wolf, he does develop rather a lot of hair and teeth. The image of Hyde as a slavering brute has the same metaphoric force as similar images in werewolf movies though, curiously, the audience’s sympathy goes more readily to the wolf than to the man. The man is seen as being partly to blame for his predicament, the wolf is seen as an innocent victim of the workings of some kind of ‘original sin’. 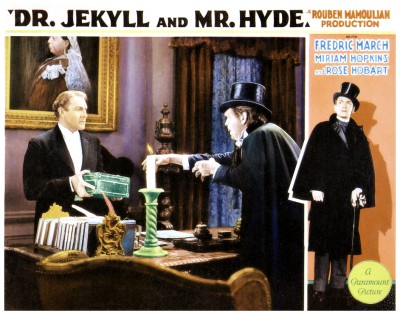 As usual, Jekyll is a pompous bore, and all the filmic interest is with Hyde. Fredric March gives a full-bloodedly obscene performance and, unlike Spencer Tracy in the 1941 remake, seems to thoroughly enjoy being reduced to his primitive animal instincts. The scenes with bad-girl Miriam Hopkins have a genuine erotic charge, and the entire film is stylish, making good use of sound (an early use of heartbeats on the soundtrack) but, as usual in the many versions of this story, the overall effect is a bit stilted and hollow – filmmakers seem to regard it as some sort of literary classic, which it is not. 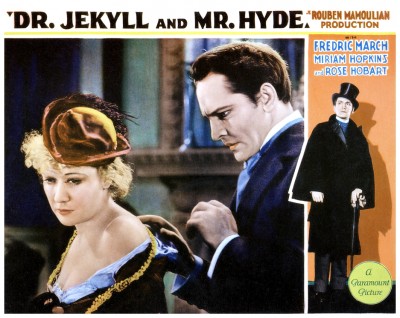 At one point Jekyll states he was glad he ventured into ‘no-man’s land’ despite having been the murderous Hyde, so I can’t tell you how disappointed I was when the script has him reconsider and beg for God’s forgiveness for treading into His domain – that’s way too common a theme for such an unusual a movie. Dr. Jekyll And Mr. Hyde offers a quasi-scientific explanation for what is fundamentally a supernatural horror story, and this became the norm in Hollywood. Even today, most science fiction films are generically horror rather than actual science fiction. The scientific elements are a perfunctory device for creating a Gothic threat. It’s with this thought in mind I’ll politely ask you to join me again next week as we step up to Hollywood’s all-you-can-eat buffet and fill your plate with public domain potato salad next week for…Horror News! Toodles! 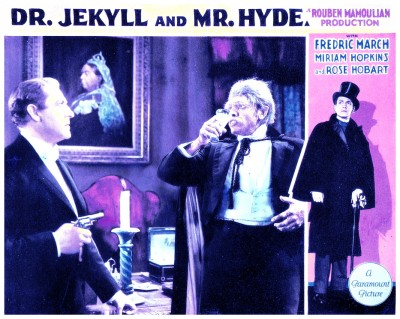 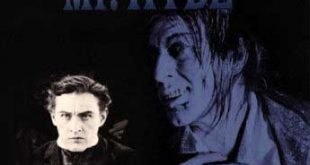