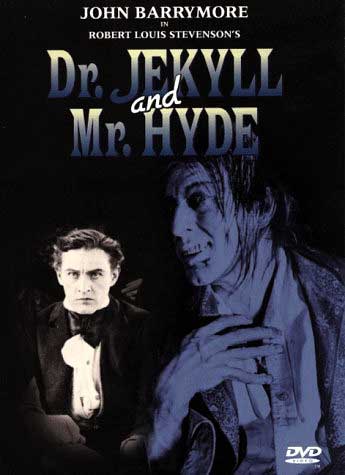 SYNOPSIS:
“Doctor Henry Jekyll’s enthusiasm for science and his selfless acts of service have made him a much-admired man. But as he visits Sir George Carew one evening, his host criticises him for his reluctance to experience the more sensual side of life. Sir George goads Jekyll into visiting a music hall, where he watches the alluring dancer Gina. Jekyll becomes fascinated with the two contrasting sides of human nature, and he becomes obsessed with the idea of separating them. After extensive work in his laboratory, he devises a formula that does indeed allow him to alternate between two completely different personalities, his own and that of a brutish, lascivious person whom he names Hyde. It is not long before the personality of Hyde begins to dominate Jekyll’s affairs.” (courtesy IMDB)

REVIEW:
Nice to see you, to see you nice. I believe you’ll be pleased with this week’s offering, which is the 1920 version of Robert Louis Stevenson‘s much-filmed story The Strange Case Of Doctor Jekyll And Mister Hyde (1920) starring my good friend John Barrymore. This is the best of many versions made during the silent era, and most of the talkie adaptations. In my own humble, subjective (yet always accurate) opinion, only the 1931 version starring Frederic March is better than this one. If you haven’t seen that version you should seek it out, but not before the conclusion of my review. To walk away before the end would be unforgivable, a terrible insult to John Barrymore, and he wasn’t one to endure badly behaved audiences. I happened to be backstage the night he fell out of character, picked up a dead fish from a banquet table and threw it at a coughing audience member and said “Busy yourself with that, you damned walrus, while the rest of us get on with the play!”

You’re probably thinking that, since John died in 1942, he wouldn’t be able to do that to you, but he was a man of very strong personality. If you don’t watch Doctor Jekyll And Mister Hyde, he might send a message from beyond the grave to his granddaughter instructing her to invade your home, pin you to the floor and force you to watch He’s Just Not That Into You (2009) over and over again. To avoid this horrendous fate, you’ll have to start watching Doctor Jekyll And Mister Hyde as soon as possible.

I’m sure you’ll enjoy my old mate John Barrymore as yet another scientist who is punished for not knowing his place and tampering with the supernatural. He filmed this while preparing for a stage production of Richard The Third and it was a turning point in his film career. Prior to this his films were light-hearted action adventures such as The Incorrigible Dukane (1915) and Raffles (1916), but with the success of this multi-leveled performance, the studios cast him in more challenging roles. His triumphs continued into the sound era, for he had a most agreeable voice.

I had no fear of the talkies either but, for some obscure reason, I was rarely offered roles with any dialogue. They probably thought my mere presence was enough, and were afraid I would upstage my co-stars – yes, I like the sound of that explanation. And before you ask, no, that is not me playing the skull on Doctor Jekyll’s desk. John and I never actually worked together, and that part was played by one of my rivals, whose name escapes my memory at present. John accomplished part of the transformation scene just by contorting his face. He later told me he filled the vials with alcohol, but mischievous crew members replaced it with raspberry cordial, and that’s the way he always reacted when he accidentally drank liquids that weren’t alcohol. His strange reaction to the antidote was due to his realising he’d fallen for the same trick twice. He was careful to ensure it did not happen a third time.

The director, John S. Robertson, hailed from Canada, and began acting in films in 1915 but soon switched to directing. Doctor Jekyll And Mister Hyde was his final major box-office success and he followed it with Tess Of The Storm Country (1922) with fellow Canadian Mary Pickford, Annie Laurie (1927) with Lillian Gish, and The Single Standard (1929) with Greta Garbo. His last film was the Shirley Temple vehicle Our Little Girl (1935). He then retired to California where, with his grey handlebar moustache and stetson hat, he caught the attention of local children, one of whom grew up to be bass guitarist for the sixties rock group The Byrds and wrote a song called Old John Robertson in 1968. What a pity Old John didn’t live to hear it, having shuffled off this mortal coil in 1964.

Making her film debut as Miss Gina was Ziegfeld girl Nita Naldi, who was born with the equally unusual name of Nonna Dooley. After this film she played vamps in several films of the twenties. In The Man From Beyond (1922) she tested the moral fibre of Harry Houdini who, as to be expected, escaped unsoiled. That same year she brought about the downfall of Rudolph Valentino in Blood And Sand (1922). Next, in The Ten Commandments (1923), she played the scarlet woman who infects Rod La Rocque with leprosy. When she encountered Rudolph Valentino again in Cobra (1925), he’d learned his lesson, resisted her wiles, kept his virtue intact, and she destroyed herself. Nita went to Germany to star in Alfred Hitchcock’s second film The Mountain Eagle (1926), which has since become a lost film. Fatigued by all that vamping, she retired from films in 1927, slipped into obscurity and passed away in 1961.

Film buffs should recognise the music hall owner as Louis Wolheim who, by the end of the decade, had a supporting role in All Quiet On The Western Front (1930). He was given that broken nose playing football at university, and was working as a maths teacher when he caught the attention of Lionel Barrymore, who said “With a face like that, he had a future in films.” Louis had begun rehearsing as the ruthless editor in The Front Page (1931) when cancer finally caught up with him. The source of all the trouble tonight, Sir George Carew, is played by English character actor Brandon Hurst. Loyal viewers will remember him as the evil manservant in White Zombie (1932) and can look forward to seeing him commit more villainy in The Hunchback Of Notre Dame (1923), which I will discuss at a later date, you lucky readers!

Playing Doctor Jekyll’s saintly fiancee Millicent Carew is Martha Mansfield. She was a musical comedy star in New York before becoming Max Linder’s film co-star, and probably should have stayed put. After this she was in a series of financially successful but undistinguished films until 1923, when catastrophic misfortune befell her. She was starring in the civil war drama The Warrens Of Virginia (1924) and wearing one of those huge dresses that were so trendy at the time. The hem of her dress came into contact with a cigarette discarded by one of the crew, and within moments she was a mass of flames. Her co-stars smothered the fire, but it was too late, and the unfortunate lady passed away the following day. And with that tragic story having put you in an appropriately sombre mood, I’ll now return to Doctor Jekyll And Mister Hyde.

Doctor Jekyll ends his life by taking poison, as atonement for his many crimes after doing all he could to escape punishment and to avoid harming Millicent – couldn’t he have just confessed to the police instead? And his original idea about splitting the personality doesn’t really stand up to close examination. His soul was certainly present when he first conceived and developed the serum. Nor did he feel compelled to stop after his first crimes – his soul collaborated all the way. If he had given his idea closer scrutiny, he would have realised this was inevitable, abandoned the plan, married sweet Millicent, and Stevenson’s novel would have been called The Unremarkable Life Of Doctor Jekyll, and would have sold fewer copies and been filmed far less often. 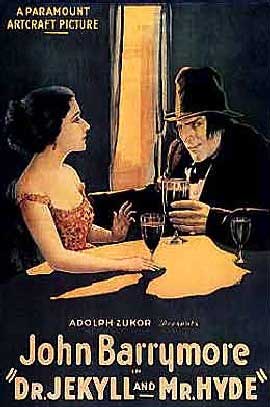 Twenties audiences would have been aware of an unmentioned subplot that is lost on today’s viewers. Hyde and Gina have contracted syphilis. It couldn’t be mentioned explicitly but audiences of the day would have known of the film and theatre convention of representing syphilis by darkened eye sockets. Both Gina and Hyde have this feature in their later scenes, but his eyes return to normal when we last see him. It turns out death cures syphilis. The financial success of this film resulted in another being made to cash-in, before the year was out. It starred Sheldon Lewis and was produced by that cad, Louis B. Mayer. It didn’t hold a candle to this one and was justly forgotten. I know you’ll agree that this is one of the very best versions of them all. Having been proven right again, I’ll take my leave of you, trusting to see you again next week after I have scoured the depths of the Public Domain to find another gem worthy of discussion on…Horror News! Toodles! 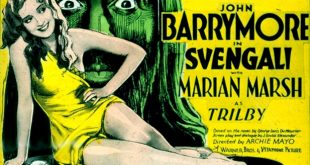