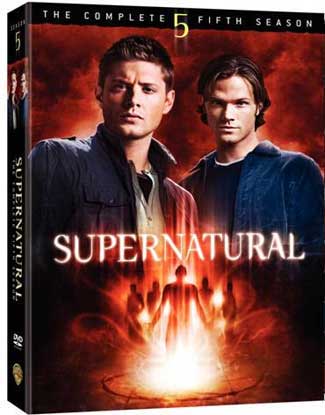 Things DO go bump in the night.
Supernatural: The Complete Fifth Season
Catch all 22 Terror-Filled Episodes ahead of the Season Six Premiere on The CW

The Apocalypse Looms on DVD and Blu-ray™ September 7, 2010

BURBANK, CA (June 21, 2010) – The Winchester brothers will rev up their ‘67 Chevy Impala once again in Supernatural: The Complete Fifth Season, debuting on DVD and Blu-ray Hi-Def from Warner Home Video on September 7, 2010. This latest installment of the three-time Emmy®-nominated series and winner of the 2010 People’s Choice Award for Favorite Sci-Fi/Fantasy Show will hit shelves just in time for fans to catch up with Sam (Jared Padelecki) and Dean (Jensen Ackles) before the paranormal journey continues with the season six premiere on The CW. The six-disc DVD and four-disc Blu-ray releases contain all 22 original season five episodes, plus nearly three hours of bonus features including featurettes, deleted scenes, a gag reel and much more. Supernatural: The Complete Fifth Season is priced at $59.98 SRP on DVD and $69.97 SRP on Blu-ray.

Two brothers and one fallen angel – against all the might of Satan and his army! As the Apocalypse grows closer, threatening to turn Earth into a battlefield soaked with human blood, Sam, Dean and Castiel struggle against daunting odds. New foes arise, including the Four Horsemen of the Apocalypse. Old friends depart, consumed by the fearsome wrath of Hell. Through it all, the Winchesters are targeted by demons and angels alike, who warn that each brother has a special and terrible role to play in the coming devastation. Season five follows Sam and Dean on their most terrifying journey yet, one that may lead them to the only ally strong enough to defeat the Devil: God.

• Producer/Writer Commentary on Episode 4, The End

Sympathy for the Devil
Good God, Y’all!
Free to Be You and Me
The End
Fallen Idols
I Believe the Children Are Our Future
The Curious Case of Dean Winchester
Changing Channels
The Real Ghostbusters
Abandon All Hope
Sam, Interrupted
Swap Meat
The Song Remains the Same
My Bloody Valentine
Dead Men Don’t Wear Plaid
Dark Side of the Moon
99 Problems
Point of No Return
Hammer of the Gods
The Devil You Know
Two Minutes to Midnight
Swan Song