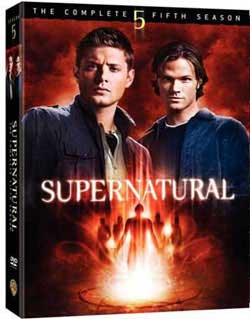 Season Five consists of 22 episodes and was rumored to be the last season, due to Eric Kripke’s statements over the years that he has planned for the show to run for five seasons. Despite this, Jared Padalecki and Jensen Ackles had contracts for a sixth season, and The CW renewed the series on February 16, 2010.

The fifth season revolves around the fight to stop Lucifer and save the world from the Apocalypse. Throughout the season, Dean and Sam battle both angels and demons as they fight their destiny to become the vessels of Michael and Lucifer. Unable to defeat Lucifer, they collect the rings of the Four Horsemen of the Apocalypse, which act as the keys to Lucifer’s prison. The idea of destiny versus freedom and choice play a big role. Throughout the season, Dean, Sam, Castiel, and Bobby each have a crisis as they near giving up. However, through each other’s support, they continue forward until the end.

Wow, can you believe it? We’ve seen this quirky, scary and often filled with urban legends series make it thru 5 whole seasons! Not only that, but this 5th one was the announced show finale that got extended for another season based on pure fan devotion and high ratings. In a market that wants to see as many new shows come and go like an old memory, Supernatural is on the same road that the highly successful X-files ran prior to it. Not only is TV a little bit better these days, but finally someone over “there” smartened up and put forth the effort to keep the Winchester boys around for another round of supernatural hi jinx. Now with this season being the 5th, I’m hoping that fans already have experienced the first 4 to where this one leads up to? If not, I consider you lucky as you get to experience the show for the first time.

So that brings us up to the current state of things. And the current state of things has come a long way from just simple ghost hunting. Dean has been to hell and back and Sam is prophesized to be the chosen one for the devil. A vessel for Satan that will help bring in the apocalypse. It doesn’t help matters that now he has a rather nasty addiction to demon blood and cohorts with several demons like they are best buds. Add to that fact that the angels of heaven are now involved and don’t play by the rules. Sam and Dean’s closest relationship with the angels lies upon Casteil who’s hard to figure out at times as an angel and at war with the conflicts of  his brothers and sisters. Castiel makes more frequent appearances, but is still somewhat secretive and uninformative when it would “seem” to matter. Dean is convinced that he’s to take on the apocalypse alone with Sam being a potential cog in the demon wheel and their only really living aid Bobby is condemned to a wheel chair due of a bad deal.

Satan is alive and well in his human vessel and hard at work to see mankind fall. In between all this the 2 boys take on a number of adventures and odd experiences. Let’s see…… how about a visit to heaven, an allegiance with a few demons that despite being powerful demons seem to want to help in some respect. Maybe the encounter with histories deities and odd god entities is a bit of a stretch in the scheme of tings, but the angels obviously have a plan that is brewing, so nothing is off limits. Angel warfare gets more complex and to be quite honest more evil for being angels. Each of the boys have to deal with a new previously undiscovered brother who has been enlisted as a vessel. And then there is the theme of the series which has the boys hunting down the 4 horsemen of the apocalypse. Each horseman provides a nice episode or 2 that as them inflicting there powers upon mankind while being hunted by Sam ad Dean.

Another thing that might please viewers, is that sometimes old characters come back and make new appearances. The whole theology here is too involved to get to specifics, though old names and a few faces are always within an arms reach as a returning guests. Other moments in the series are regarded as more fun times, such as the appearance of Paris Hilton, more adventures with Ghostfacers and even there old friend the trixter who spins time and space around in circles.

I think you can get the notion that “alot” goes on this season and the writers have really interjected there best work into bringing out all levels of encounters. Now after all is said and done, they are still having one big issue. That is ….where is God in all this mess? Is he alive, hiding, doesn’t care or orchestrating behind the scenes? I think originally the series was to bring  all these unanswered points to the surface maybe in the last few episodes. Though with a season addition coming (6), I’m sure a few things had to be changed to keep the show alive. Now the big question is….what next? I mean you’ve brought all the supernatural elements to the highest level with the strongest of deities showing up and are expected to continue that into a new season?? I’m putting my money on maybe a GOD interaction…..next season. Hey, why not..right?

Well, one’s things for sure…..the writing team will come up with something that takes us for a ride. 5 seasons proves that without a doubt. I only hope that a few of the characters will hang around and make a few more appearances.

The DVD set includes the frequent “gag reel”, a bunch of webisodes from the “Ghost facers team (which are actually quite entertaining) and an odd interactive piece that takes you into Bobby’s house to look at some old documentaries about surpnartrral stuff, the devil and what not.

As always, this set is a keeper and a repeater for fans of the show and horror adventures in general. Easily one of the most clever shows ever created, Supernatural is a masterpiece of TV entertainment!