It’s becoming more and more evident to me that our time on this planet is limited. It’s a strange thing, this 2012 rhetoric. I’m not one to easily buy into doomsday theories, but the last couple of months have been un-relentless with signs of the apocalypse.

You need only look to the skies to see thousands of dead birds dropping to the ground, to get the point. How about all the dead fish washing up on the shores. Yes, I know that there are legitimate answers for everything and anything can be explained and even over explained. It doesn’t stop the questions. We are all still feeling the aftermath of the massive Earthquake in Japan that moved the Earth’s axis and the Tsunami that followed which caused tragedy like the world has never seen, at least through the mass media eyes.

The earthquake not only rattled Japan physically but also shook up the economic balance of things, which is already beyond horrible. If that’s not bad enough… the nuclear meltdown caused by the quake continues to poison the Earth. Low levels of radiation were found in the rain water in Pennsylvania and Massachusetts. Oh, only low levels… nothing to worry about here. I would be so upset about all of these shenanigans if it wasn’t for the fluoride in my drinking water that keeps me passive. You know the catch praise from the X Files, “The Truth is Out There”. It’s not. There is no truth out there.

Only lies. I hope everyone had a chance to listen to my interview with Governor Jesse Ventura about his new book, 63 Documents the Government doesn’t want you to read. It’s eye opening. He covers a lot of the Wiki Leaks material in his book, plus other tantalizing morsels that will stimulate your brain. Here’s the thing, I’m more of an observer. I take the approach of sitting back and watching other people react. I have people close to me that literally become unglued when the bad news story of the day is released. It’s like chocolate candy.

You know it’s bad for your teeth but you can’t wait to take another bite. All this negative news is bad for your soul, and the more you feed into it and more you’re going to rot from the inside out. I’m not about negativity. If you are positive and you release positive energy out onto the world, just maybe the dead birds will fly again. I think you can read between the lines of that statement. I have “Liger blood” running through my veins, as in Jushin Liger. It’s not too late.

I can’t help but think that all those Godzilla movies from the 60’s and 70’s are about to come true. You know, the earthquake and the radiation. It’s custom made for a monster movie.

THIS IS… Unexplained Confidential and I’m Joyhorror and my opinions might not be your own but I guarantee that I’ll bring you paranormal like you’ve never gotten it before.

There are no much things as UFO’s. It’s a popular statement but is it true? Did you know that the UK recently released Government Documents that detail UFO investigations, eyewitness testimony, and extraterrestrial visitors.

You know that’s a lot of documents for something that is just science fiction. Why would all this time and energy and paperwork be wasted on something that isn’t even true. I mean, this is the British Government and one would think that they have better things to do than research a bunch of malarky. If there are no much thing as UFO’s then why are there 8,000 documents about them? Am I making any sense here? It’s like the Government researching Smurfs. There is no such thing as little blue men. There is no such thing as little green men.

There is no such thing. I think you get it. Hey, the 42nd Annual MUFON Symposium is announced for July 29 – 30, 2011. This year’s theme is “ ET Contact: The Implications for Science and Society “. The Symposium will take place at the Hyatt Regency in Irvine, CA. It sounds like a good one. I wish I could make it but it’s not likely. I’m in New Jersey, it’s in California. Do the math. I was watching Conan O’Brian a few weeks ago and Seth Rogan was on talking about his movie, “Paul” which is about an alien on a road trip basically.

He said he got a chance to meet George Lucas and the hot topic was 2012 and he said that George Lucas REALLY believed that the world was going to end in 2012, no joke. I think it’s interesting that the man who gave us Star Wars and the pioneer of modern science fiction, has deep routed beliefs about 2012. Seth comments on Conan’s show about how he thinks George Lucas has a real Millenium Falcon hidden at Skywalker Ranch, and it’s ready to take off once the sh*t hits the fan. I’d buy that theory. 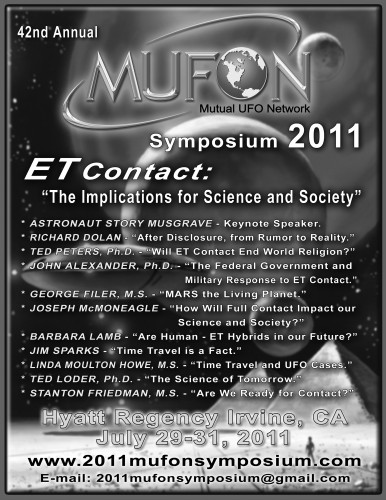