Got some news on a creepy looking new flick heading our way from Tribeca Films. With the catchy title RUBBERNECK the film is being billed as a slow-burn character study-turned-psychosexual thriller, Rubberneck, co-written by Karpovsky (“Girls”) and Garth Donovan, is a chillingly believable story of workplace romance gone wrong. It co-stars Jaime Ray Newman and Dennis Staroselsky and was produced by Michael Bowes, Garth Donovan, and Adam Roffman.

We’ve all had that creepy co-worker right? The one that we go out of the way to avoid in the lunch room or hope to not run into on a bathroom break. This film is about just that only taken to the extreme.

Paul Harris is a scientist at a small research facility on the outskirts of Boston. After a weekend tryst with Danielle, an attractive and promiscuous co-worker, leaves him wanting more, his unreciprocated desires gradually mold into an acute infatuation over the following months. When Danielle takes interest in a new researcher at the laboratory, Paul’s suppressed resentments and perverse delusions finally become unhinged, triggering an horrific course of events that mercilessly engulf a tortured past and fugitive present. A slow-burning, character-driven psychosexual thriller, Rubberneck navigates through the binds of childhood, the underpinnings of obsessions, and our sadistic inability to look away.

If you head on over to the films OFFICIAL WEBSITE you can get a ton more info. 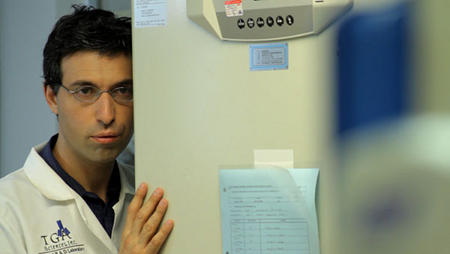