It doesn’t open till this fall but tonight brings us the first official look at MACHETE KILLS which will once again unite the always bad ass Danny Trejo with director Robert Rodrigeuz in what I am sure will be more bloody fun.

In the pic below we see Machete doing what he does best (besides killing) as he gets up close and personal with the lovely Amber Heard. 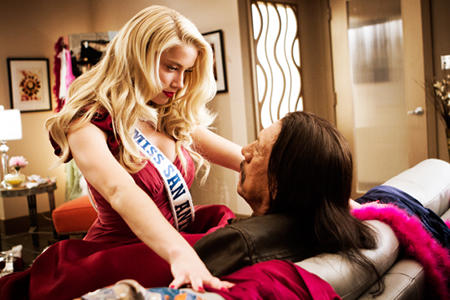 So, what evil plot will MACHETE have to thwart this time?

Danny Trejo returns as ex-Federale agent Machete, who is recruited by the President of the United States for a mission which would be impossible for any mortal man – he must take down a madman revolutionary and an eccentric billionaire arms dealer who has hatched a plan to spread war and anarchy across the planet.

MACHETE KILLS is slated to assault theaters on Sept. 13th.