Land of Shadow and Substance: One for the Angels

With the second episode came sweeping and vastly improving changes. Not only did Rod Serling begin as the official narrator, but the title font became set in stone too. Therefore, in the timeframe between episodes one and two, The Twilight Zone fast transformed, becoming what we all now recognize and are familiar with. Of course, while the official four note theme had yet to be composed, the current theme more than adequately introduced the concept, creepily implying the bizarre nature of the show. 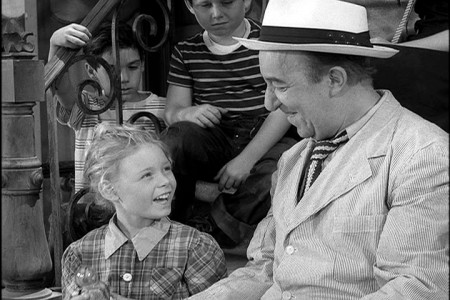 Originally, Serling wrote One for the Angels as a teleplay immediately after college. It was aired on both The Storm, as well as Danger, but wasn’t the exact tale as seen on the Twilight Zone. The original told the tale of a pitchman, maintaining such an enticing pitch that a crowd remained and thus, saved his brother’s life from the perils of two hitmen.

However, for the Twilight Zone, director Robert Parrish considered the tale not compassionate enough. After all, would anyone really feel sorry if a two bit criminal lost out to other criminals? And so, the tale was rewritten. While it still included the original pitchman, the cause for the pitch became completely different… 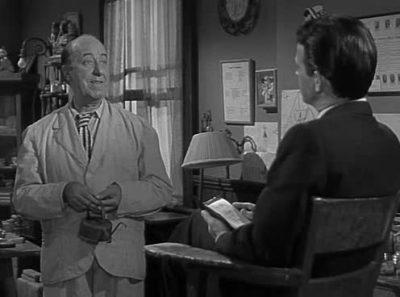 Lew Bookman (Ed Wynn) is kind and gentle, sixty-nine year old pitchman; a persuasive sidewalk seller of trinkets that has no family other than the neighborhood children who enjoy the opportunity to spend time with him. And, he feels the same toward them, many times offering a gift of candy or a toy, and making it a point to remind them of social ice cream hour, an effort to combat the July heat.

Upon entering his apartment, he is confronted by what appears to be a normal man. But, this man is far from normal, for this man is Mr. Death (Murray Hamilton), and he’s come to inform Lew that his departure time is midnight. Lew is skeptical until one of the children, Maggie (Dana Dillaway), during a quick visit, is unable to see or hear the man. Mr. Death informs Lew that only scheduled folks are aware of his presence.

Lew, while maintaining dignity, pleads for his life, saying he’s not ready to go. Death informs him that while there are three reasons for any potential deviance, hardship on a family member, man on the verge of discovering something that will aid mankind, or a person who has business of an unfinished nature. However, according to Death, none apply to him.

But Lew isn’t about to give up that easy and tries to convince Death that he does indeed have some unfinished business. That he had always wanted to, but never did, make that big pitch. Death ponders and finally agrees to let Lew remain on earth long enough to fulfill the commitment of that one big pitch. But, Lew has other plans in mind, assuming that as long as that pitch is never made, Death cannot come for him. After all, a bargain is a bargain. 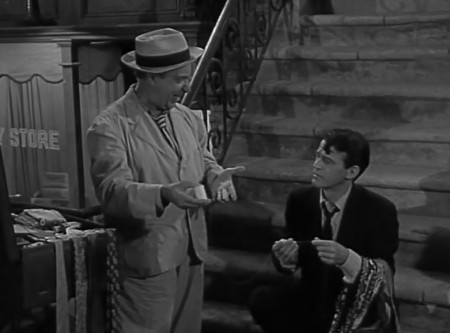 Death realizes Lew’s premeditation and informs him that there will be dire consequences, and proceeds to substitute Maggie for Lew, arranging for the little girl to be hit by a passing truck. However, the little girl is not killed and lies in her bed unaware of her scheduled departure precisely at midnight.

Lew is nothing short of emotionally distraught, and as the clock approaches midnight, Lew is outside Maggie’s home, awaiting Death’s arrival with another plan in mind.

Death approaches, and Lew commences to pitching his wares, which include a silk tie, a spool of thread and various other items. His pitch is so compelling that Death forgets all about the time and remains rooted, purchasing everything Lew has.

The clock strikes midnight and since Death wasn’t there to collect, the girl is safe. As for Lew, he has made that big pitch and slowly walks away with Death.