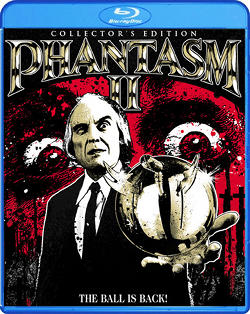 Without a doubt, one of the most eagerly anticipated Blu-ray releases of the year the coming release of PHANTASM II coming at us from SCREAM FACTORY. This whole line of SCREAM FACTORY releases that have been hitting us since Halloween have been nothing short of stellar and after getting a look at this list of special features that they have amassed for PHANTASM II, it appears nothing has changed.

Hitting the shelves on March 5th the disc will feature the following:

It’s taken SCREAM FACTORY a while to finalize the bonus content but it’s been worth the wait!

Remember, March 5th. That same day they will also release FROM BEYOND!!

You can preorder the disc now if you head on over to the SHOUT! FACTORY website.