The Land of Shadow and Substance – The premiere episode – “Where is Everybody?”

On October 2, 1959, America had the opportunity to view a brand new television show from CBS that eventually proved to be a classic. However, this very first show was different than the rest of the series, with only the story tale type and filming style staying consistent.

While the name Twilight Zone remained the same, the show’s title lettering was simply block type and boring, a far cry from the chaotic and mystery implying lettering that we all now recognize. And, not only was the lettering different, but both the narrator, as well as the theme was different too. 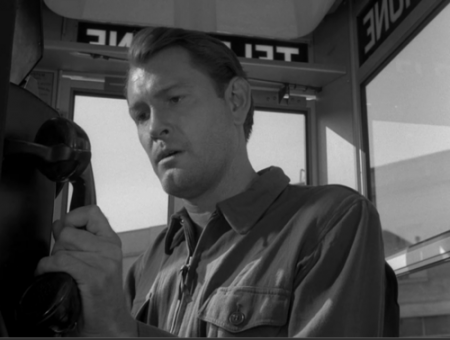 The original narrator was Westbrook Van Voorhis, chosen for his large, conveying voice. However, his voice sounded and appeared too arrogant and somewhat grandiose, and everyone associated with this initial episode viewing agreed that a different narrator was needed. It wouldn’t be until Rod Serling himself, at the time known and considered to be only a writer, suggested that he do it. This proved to be a crucial turning point. Although, prior to Serling’s suggestion, it was the general consensus that Orson Wells be the narrator, but his fee pushed the budget of the unknown show over acceptable limits. Needless to say, most will now attest that the final choice was a wise one.

And, as far as the theme was concerned, while starting to slightly lean toward what we all are now familiar with, it wouldn’t become those famous four notes just yet. More on that later, in a subsequent article.

Nonetheless, written by Rod Serling and starring Earl Holliman, on with the show…Where Is Everybody?

Suddenly finding himself walking down a road with no recollection of how he got there, Mike Ferris, dressed in a jumpsuit, stumbles upon a diner with the jukebox blaring out roaring twenties dance music. He enters intent on obtaining breakfast, and comments on the volume. However, he is only talking to himself since no one is there. After calling out a number of times to an unknown proprietor, he notices a brewing coffee pot and helps himself to a cup. While sipping, he draws a few dollars from his pocket and waves it about, calling out yet again, mentioning that the place has a paying customer willing to pay with American cash money. The statement forces him to ponder his amnesiac thoughts, and he begins to wonder who he actually is. Nonetheless, there is no reply and after finishing the coffee, he tosses a dime on the counter, leaves and continues down the highway, where he comes upon a town.

Growing frantic, he is confused by not finding any people. The church bells chime and he notices what appears to be a woman, sitting in the passenger seat of a car across the street. Not wanting to frighten, he slowly approaches, reassuring that he means no harm. But, when he reaches the woman, he discovers that it is simply a mannequin, used as an advertisement.

A phone booth telephone rings and he rushes to answer it, only to find no one on the other end. He drops in a dime and dials the operator. But, that too is of no use, and he only succeeds in connecting to a standard recorded message.

Meanwhile, an impending feeling of doom and paranoia begins to mount, and through a whirlwind search, he begins to explore the town’s various businesses.

At the drugstore he lazily spins a paperback book rack before seeing that every book is exactly the same, with the title “The Last Man on Earth.”

At the police station, humorously referring to himself, he attempts to radio all cars to be on the lookout for a strange man in town, before noticing a lit cigar smoldering in an ashtray that confirms, in fact, that there obviously must be a person nearby. Quickly, he searches empty jail cells, only finding a fresh, shaving lather filled brush and nothing or no one else.

As a preponderance of flourishing questions grow, the feeling of being watched increases tenfold and as he strolls down the street, he quickly turns about along the way, hoping to inadvertently catch someone in the midst of spying from behind. But there is no one.

As darkness approaches and after a single person game of tic tac toe, played in the dirt while sitting on a park bench, a light suddenly appears from behind. With hope in his eyes, he whips around to see a movie theater, its bright marquee lights proclaiming the feature. He goes to it, noticing along the way, a poster of a picture of a man dressed exactly as he, directing an airplane. This jolts his memory and he races into the theater yelling and proclaiming that he is in the Air Force. In the showing room, the film begins, and just as with the cigar at the police station, this reiterates that there must be someone there.

When he finds no one running the projector, it sends him completely over the edge. He stumbles into the street, collapses and hysterically begins to continually push the stoplight’s walk button.

For Mike Ferris, he is an astronaut-in-training, having just spent 484 hours alone in an isolation tank being closely watched by the higher ups. His mind has finally cracked from loneliness and the town, devoid of people, is only a hallucination.

Next time, episode two – “One For the Angels”