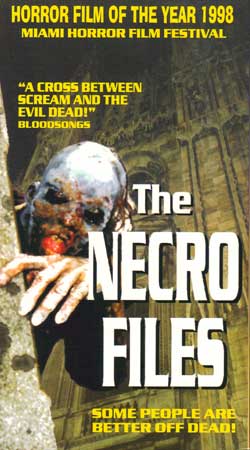 A cannibal rapist rises from the grave as a flesh-eating zombie sex maniac! Two Seattle cops, a Satanic cult and a flying demon fetus try to stop the lust-crazed ghoul before he can kill again.

There are few things that irritate me more than when my Satanic blood sacrifice at the local cemetery is interrupted by an undead rapist tearing off my friend’s penis. But that is exactly what puts into motion the events that make up Matt Jaissle’s third film, The Necro Files.

We are first introduced to Logan, the serial killer and rapist with over two hundred victims, as he peers in through the skylight of an unsuspecting woman taking a shower. He has the hockey mask of Jason Voorhees, which features the forehead swastika of Charles Manson, and as he strangles the freshly showered woman gives us the curious head tilt of Michael Myers. Taking off his mask as he examines his first victim, we see he features the hair of Sideshow Bob. He simultaneously rapes and stabs her to death, attempting to eat her nipple but unfortunately vomiting blood. Detectives arrive at the scene, catch him, and, after being hit in slow-motion with a bottle, Detective Manners empties his gun into Logan, killing him. 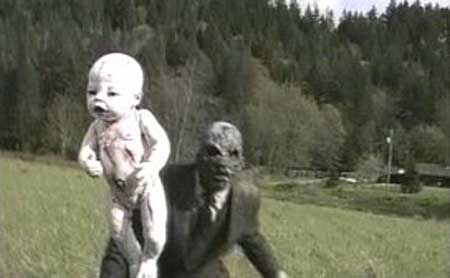 From this moment on, hilarity ensues…Skip ahead nine months, and we join black-cloaked Satanists/LARPers holding their aforementioned blood sacrifice. In broad daylight, the leader (who at first glance appeared to be Gwar’s Oderus Urungus) pulls a baby (read: plastic doll) from a bag and stabs it with a knife, buries it, then urinates on the freshly covered grave, all the while reciting spells to the dark lord Satan. Did I mention that this baby happens to be the product of a rape and failed murder by the deceased Logan? And did I mention they happen to be holding their ritual at Logan’s grave? Needless to say, our dead rapist/murderer comes back from the grave, now a rotting corpse with an enormous (as in two-foot long) penis, killing most of the Satanists.

For the most part, the rest of the movie almost writes itself. Angry zombie rapist/killer Logan wanders around Seattle, raping and killing, progressively looking more and more dead as the movie goes on. And had The Necro Files continued along this path, it could have gotten away with it, falling into a big pile of one-watch B-grade horror movies. But director Jaissle and writer Todd Tjersland decided to one-up the competition.
Earlier I mentioned that undead Logan kills most of the Satanists. Two did escape and holed themselves up at a motel. Unhappy with earlier events, they go back to the cemetery (still in broad daylight) and recite a spell that will conjure a new demon to clean up the mess they created, “like a demonic janitor.” Thinking it a bust, they retreat to their Satan-worship storage space (complete with a velvet Anton LaVey on the wall) and pray to Jesus for help. Little do they know, their spell did work, and we see the previously sacrificed baby/Logan’s illegitimate child return from the dead, (literally) flying out of its grave and screaming a sound that resembles an off-key John Zorn saxophone solo. 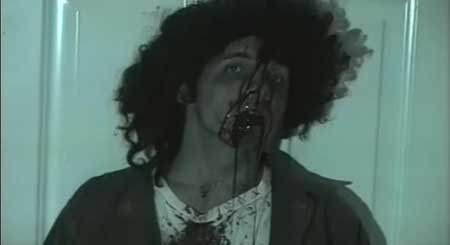 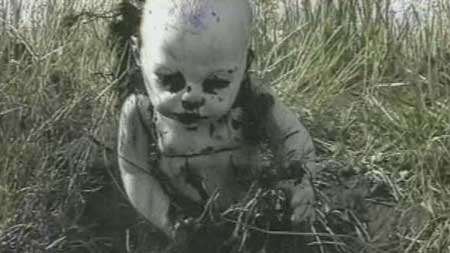 This movie is amazing. Without spoiling anything, from this point on it just gets better and better, including a blow-up doll love interest, Detective Manners’ increasing drug problem that he passes off as cold medicine, and fights involving the undead baby that are reminiscent of scenes from Peter Jackson’s Dead Alive, minus the budget.

I cannot recommend this movie enough. On one hand, I want to warn you that it is really bad. The acting is horrible (Detective Sloane could pass as Mike Schank’s (American Movie) long-lost brother). The gore has a high gross-out rating, but is obviously low budget. The title of the movie is not relevant until the closing credits which I assume allude to the plot of the two sequels. And don’t look for any actors you’ll recognize; the most famous is Dru Berrymore (note the spelling) who went on to an uncredited role in David Lynch’s Lost Highway as well as over two hundred adult titles (sorry, I believe Angeline Jolie was too busy preparing for her role in Gia when this movie was filmed). 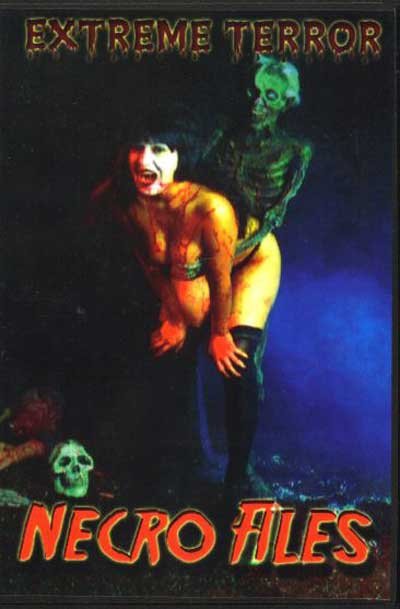 Then again, no one said this was a blockbuster Hollywood film, nor does it pretend to be. The writing is good enough, but at least there is a solid plot and some funny lines (Detective Sloane walks in to a murder scene, sees a woman mutilated on a bed and says “Looks like someone decided to throw a party. Anybody know who the birthday boy might be?”) Let’s be honest, The Necro Files is a movie about a zombie with a twenty-four inch long penis who falls in love with a blow-up doll while on a killing spree and the dim-witted detectives who are out to stop him. The English Patient this is not, which is exactly how I’d prefer it. 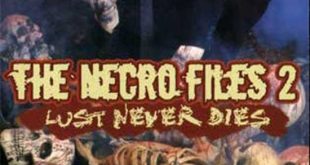