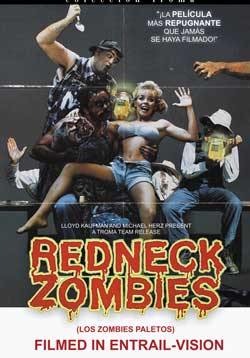 A barrel of radioactive waste is lost out in the woods. Some demented rednecks find it and use it as part of their still. Everybody who drinks from the liquor they produced turns into a zombie.

When one sees the title of Redneck Zombies, along with the producing company Full Moon Entertainment with distribution by Troma, a red flag should go up: what I’m about to watch is either going to be so bad that it’s good, or it’s going to be so bad that it’s just complete garbage. Those boundaries are often generated by the individual viewer, and it’s difficult to gauge how each person will react to Pericles Lewnes’ brash, gory, and insanely low-budget film about tainted moonshine, but for the most part Redneck Zombies falls into the category of utter trash. 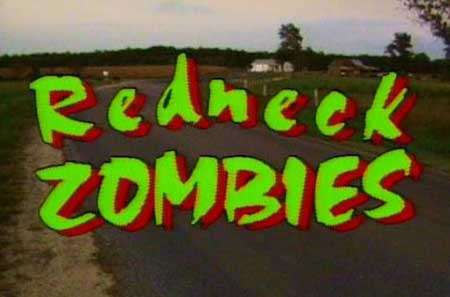 The first thing to notice is that Redneck Zombies isn’t at least shot with quality camerawork. This is cheap filming at its lowest, and the home-video quality of footage is only the first example of how awful the film really is. If the viewer can get through this fact, they might stand a chance of watching the entire film, or at least even get to the main point of the plot, which has nearly nothing to do with the opening.

A barrel of radioactive waste falls off of a military jeep driven by a guy who really could care less about his mission; it falls into the hands of some country bumpkins with shotguns who want to use the barrel as a still, but the green fluid inside spills out and contaminates the corn mash the group had been meaning to make into moonshine. But since they’re rednecks, they could really care less, and they use the mash anyway to make a green, potent blend of chemicals that they distribute to the rest of the town. 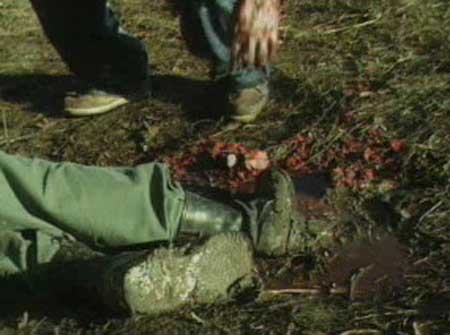 Completely coincidentally, of course, a group of kids(?) – adults(?), Brownie scouts(?) – are camping in the woods near that deadly still. The reason for their hike isn’t really apparent at all, and the campers are the only real semblance of a storyline that you’ll get from Redneck Zombies, a film that’s real intention is to just show the bloodiest zombies and the most inane actions put to film.

Apparently everyone in town drinks moonshine made by these rednecks, because pretty soon the campers are under attack by hungry zombies fighting off a major bender. None of them know the slightest thing to do during a zombie outbreak, though, and they’re lucky if they make it out with their limbs intact.

The first half of Redneck Zombies is meant as screwball comedy; however, it’s never even remotely funny. The jokes are hackneyed and all fall flat, and it’s not even humorous to those who are watching it to mock the film. In general, it’s just overly boring until zombies begin to attack – then at least things get bloodier, more outrageous, and just a tad less juvenile. 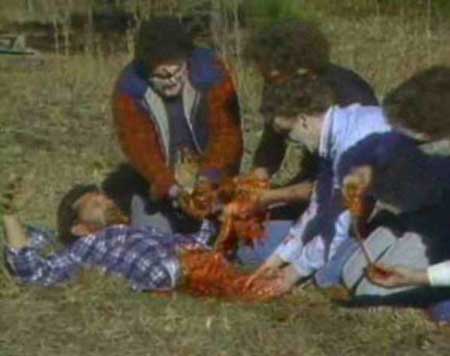 The movie’s got an amazing number of totally useless scenes in it, too. It spends ten minutes with the camping group as they get high, utilizing the camera’s crazy psychedelic color enhancement and messing with the visuals in a trippy display of how to waste time. This happens not once but twice, involving one of the only funny bits in the film where a dissection takes place with sight gags aplenty.

There’s also the world’s grossest nipples on display during a scene where two couch potatoes sit around, giggling and tossing out “I like boobies!” – like Beavis and Butthead, but with less relevance. This kind of stuff is liberally doused throughout Redneck Zombies. If the film at first seems like it’s worth a watch because of the ridiculous gore effects, remember these stupid highlights. 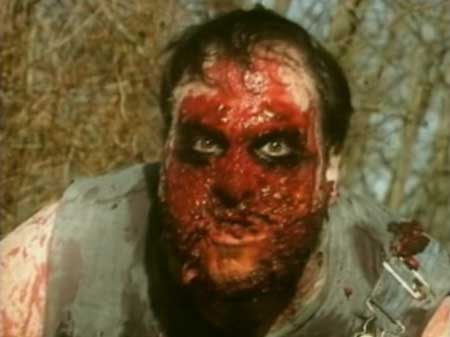 The film does actually have some cool effects, though. Boiling faces and spurting necks and a juicy mess of blood does come into play during the latter portion of the film; it’s more like a thank-you to the poor saps who sat through the earlier parts of the movie. Then again, Redneck Zombies drags slowly through its closing ten minutes, throwing “surprise” attacks at us over and over, as though the filmmakers thought that if the audience sat through it for this long, they’ll put up with anything. 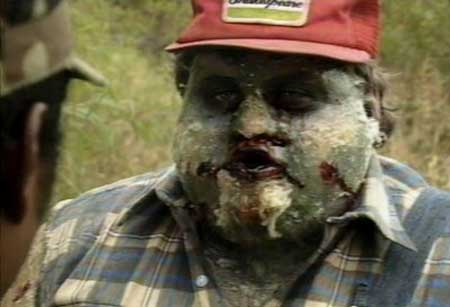 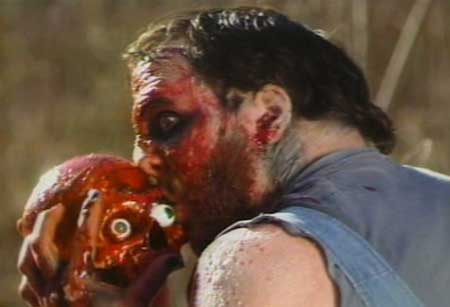 Though it’s a Troma “classic”, it’s not worth the hassle. You don’t need to seek it out, and thanks to this review, you don’t need to see it at all. Unless you’re a diehard fan of really terrible movies, skip over this redneck country.